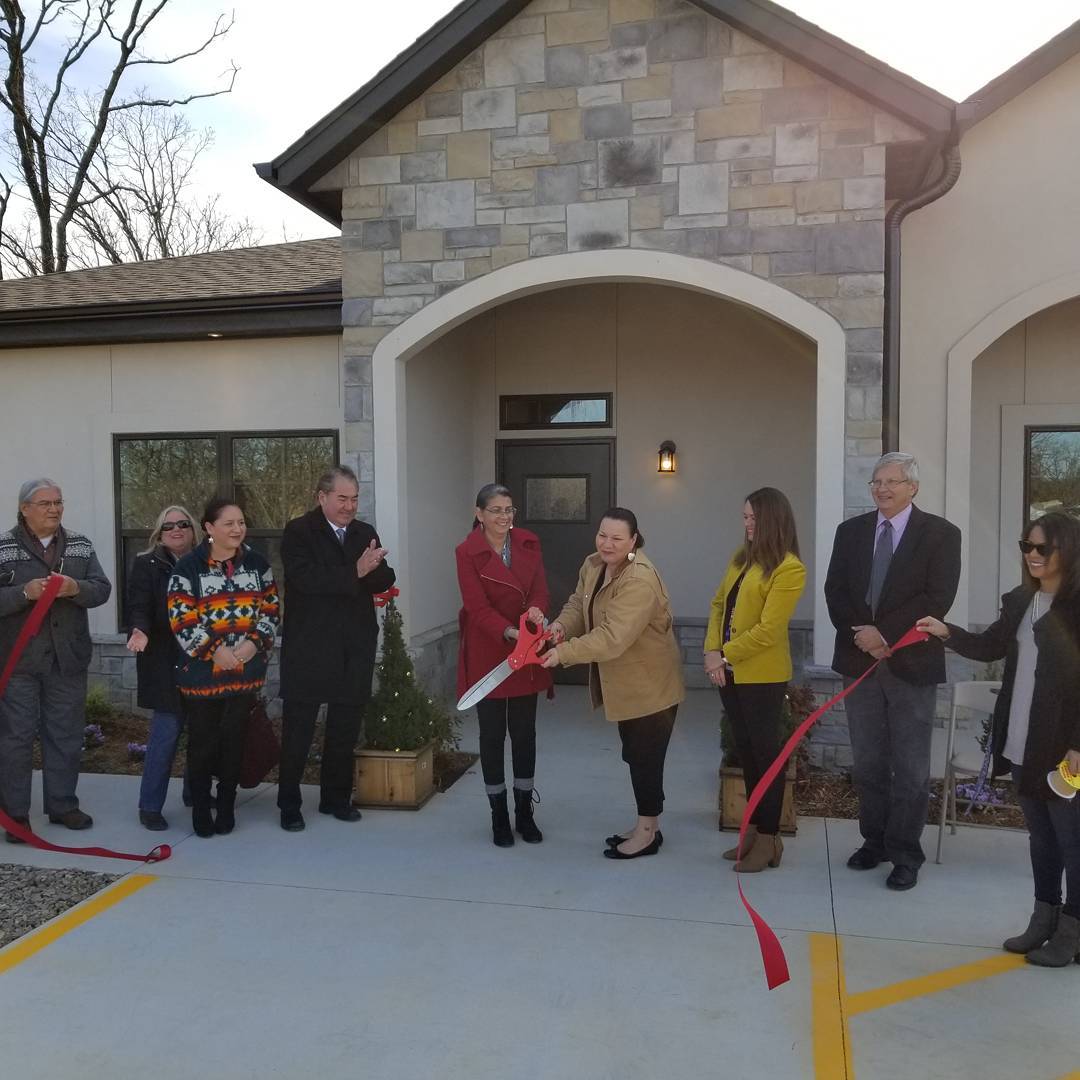 After nine months of construction, the Osage Nation now has a new domestic violence shelter and Primary Residential Treatment facility for women escaping abusive living conditions or needing help for substance use.

Tribal government, local law enforcement and social service officials gathered at a Dec. 5 ribbon-cutting and grand opening ceremony for the two facilities located on Nation-owned land in the Pawhuska area. For safety and privacy concerns for shelter clients, the location is not shared with the public.

The Nation’s Family Violence Prevention Department will manage the new shelter, which has larger space for client and victim use. Olivia “Libbi” Gray, FVPD director, said she is thankful the department has a bigger shelter facility but also added: “I’m very sad that we need this shelter, the problem is big and I wish I could tell you we’re getting in front of this, but we’re not. There’s not enough shelters in Oklahoma. Once again, for at least 15 years, Oklahoma ranks in the top 10 for women killed by men.”

For the Nation and its communities, the domestic violence shelter is a 3,000 square-foot facility open to women and children from Osage County. The shelter features housing amenities including five bedrooms with a living room, kitchen and office space, according to an ON news release. The shelter currently employs two full-time staffers and four part-time workers.

Gray said the shelter will also be called “Tsi Ohase,” in the Osage language which translates to “the refuge house. It’s a place of safety, it’s a place to heal and (Osage language instructor Cameron Pratt) came up with a perfect name. When you look in the back, you’re going to see an area set aside for a women’s sweat (ceremony) to help them heal and we’ve just hired a traditional healing coordinator, Arleata Snell, and we’re so glad to have her.”

The nearby PRT facility will provide services and temporary residency for Osage and Native American women in need of treatment for substance abuse including alcohol and drugs. The Nation’s PRT has a separate facility for men in Barnsdall and comprises a 60-day treatment program for its clients, according to its website.

ON Principal Chief Geoffrey Standing Bear said building the two facilities was made possible with $800,000 in federal funding awarded to the Nation with the money split in half to fund construction. Standing Bear said his administration found the unspent $800,000 federal money shortly after he was elected in 2014 and the money was then reprogrammed with the help of ON Housing Compliance Officer Joe Freeman to pay for design and construction costs and funding from the Roads Department also paid for an access way to the facilities.

At the opening, Jessica Hargrove, a Child Protective Services investigator for the Nation’s Social Services Department, said “your new facility is an awesome benefit to Social Services and to our families and children” in congratulating the Nation on the construction completion.

Stephen Ray, a child welfare specialist supervisor for Oklahoma’s Department of Human Services, said “it is a huge sigh of relief to have such a great (FVPD) to be able to work with our families and our kids … I have a lot of hope in the different resources that this program is able to provide for clients and I’m extremely thankful for (Gray’s) overwhelming support and how much she goes over and beyond for clients, it’s way more than I’ve seen in most other situations like this, so I would like to thank Libbi and the Osage Nation for all of their efforts in order to do everything they can to make sure the children and families are safe and preserved.”

In the past 12 months, Gray said her office has improved services thanks to the support of the Nation’s officials and departments. For example, Gray said her staff provided training to Wah-Zha-Zhi Health Center staff so those clinic workers can identify signs of abuse and how to help those patients who may be in danger.

Gray said the facility will include a playground for children staying with clients and a place for cookouts “because this needs to be a home, not just a shelter … If this building does nothing else but save one life, then we’ve all done something worthwhile.”

For PRT service information, call (918) 287-5413 or visit its website at: www.osagenation-nsn.gov/what-we-do/prt-department

For ON Family Violence Prevention Department services and more information, call its office at (918) 287-5422. The department website is located at: www.osagenation-nsn.gov/what-we-do/counseling-center/domestic-violence