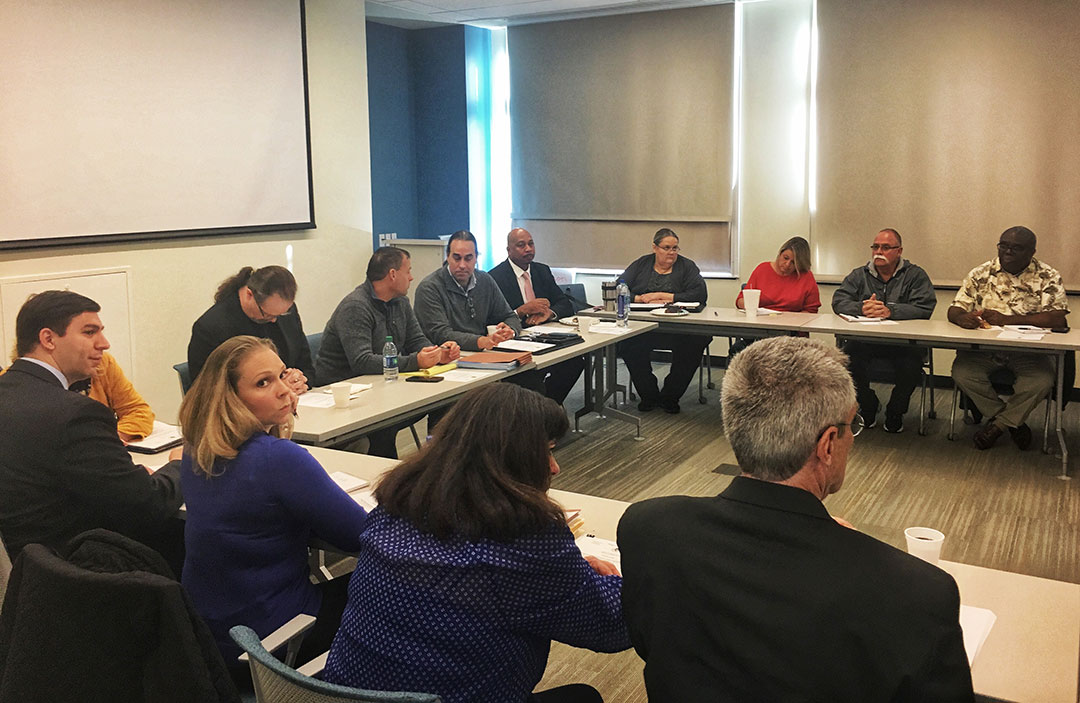 The Third Osage Minerals Council met with the new director of the Bureau of Indian Affairs and other BIA and Department of Interior officials in a closed consultation meeting on Dec. 13. ON Assistant Attorney General Clint Patterson, Self Governance Director Candy Thomas and the Osage News were present at the beginning of the meeting but were swiftly removed.

OMC Chairman Everett Waller said, “I need to take care of a bit of housekeeping,” and then asked the three individuals to leave. Patterson asked Waller if the meeting was being conducted in executive session and Waller said he had a letter from the OMC’s attorney stating the OMC could have a closed meeting with the BIA. “This is a government to government meeting between representatives of the United States government and the Osage Minerals Council,” he said.

Present at the meeting was Bryan Rice (Cherokee), who was appointed BIA director in October by Interior Secretary Ryan Zinke. Also present was Eddie Streater, Director of the BIA’s Eastern Oklahoma Region, Osage Agency Superintendent Robin Phillips, Charles Babst, an attorney from the Office of the Solicitor (Department of Interior) from Tulsa, and other attorneys and employees for the BIA and the DOI.

Principal Chief Geoffrey Standing Bear said the minerals council is not the Osage Nation government and that the government consists of the Executive Branch and the Legislative Branch. According to a DOI press release on Rice’s appointment, Rice’s job is to “coordinate government-to-government relations with the 567 federally recognized tribes in the United States.”

Standing Bear said he objects to the BIA and the DOI officials meeting solely with the minerals council without the government of the Osage Nation present. He said the Principal Chief, the Osage Congress, and the Osage Minerals Council all three signed the Highest Posted Price settlement and that he has been asking to be part of the consultations since he got elected in 2014, but the minerals council has entered into an agreement with the BIA that excludes the Chief and the Congress.

Speaker of the Osage Congress, Angela Pratt, said the Congress was not invited to the meeting and had no prior knowledge of the meeting.

Standing Bear said he was notified of the meeting by Susan Forman, Chair of the Osage Shareholder’s Association. Forman sent an email to the minerals council at 2:23 p.m. on Dec. 13, asking for information from the meeting.

“On behalf of the Osage Shareholders Association, we the Executive Committee, are formally requesting a copy of the report of today’s meeting with Bryan Rice and other Department of the Interior – BIA staff,” she wrote in the email. “Additionally, we would like copies of the reports of all the previous meetings held with the DOI-BIA required by our 2011 Settlement.”

Standing Bear released a statement on Dec. 14, “Page 21, Section C of the Osage Trust Settlement Agreement allows the Minerals Council to meet separately with the BIA only on certain matters. When there is a government-to-government consultation such as what happened Wednesday, December 13, that is very different. When there is a government-to-government consultation it requires written notice and the participation of the Chief and the Osage Congress. Everyone needs to understand the difference between BIA consultation on mineral management and leasing and Osage government matters. Federal BIA over-regulation and BIA violation of Osage sovereignty are serious issues which involve the entire Osage Nation, all Osage landowners, and all Osage headright shareholders. I have been informed a substantial part of this ‘consultation’ was regarding the Osage Nation surface program Real Estate Services. I am told the Minerals Council and BIA discussed our program activities and Superintendent Phillips made inaccurate statements regarding our Osage Nation Real Estate Services. No prior notice was given for the agenda of this consultation meeting. I intend to send a letter to Secretary of the Interior Zinke informing of what I have just said.”

The ON Supreme Court ruled in the case Cynthia Boone, Everett Waller, Kathryn Red Corn, Joseph Cheshewalla and Stephanie Erwin, Duly Elected Minerals Council Members v. Osage Nation of Oklahoma (2016), that the OMC is subject to the laws of the Osage Nation.

According to the Open Meetings Act, all public bodies must post notice of their meetings and the agendas of their meetings 48 hours in advance, unless the meeting is an emergency, then the act allows for 24-hour notice to be posted. The meetings must be posted at the place of the meeting site and at the offices of the public body. Executive Sessions must be noted with a specificity of what will be discussed. Minutes must be kept and made available to the public.

The OMC is made up of eight elected public officials and more than five members of the OMC were present at the meeting. The meeting was held at 10 a.m. on Dec. 13, in the Law Building on the Osage Campus in Pawhuska.

In September, four OMC members voted to sue the Osage Nation over the ownership of the Osage Mineral Estate and the law firm representing the OMC in that legal opinion was Fredericks Peebles & Morgan LLP. Those members voting in favor were council members Erwin, Boone, Kathryn Red Corn, and Cheshewalla. Red Corn later reversed herself and the resolution was rescinded.

[Editor's Note: This story was updated on Dec. 14 to add a statement from Principal Chief Geoffrey Standing Bear.]