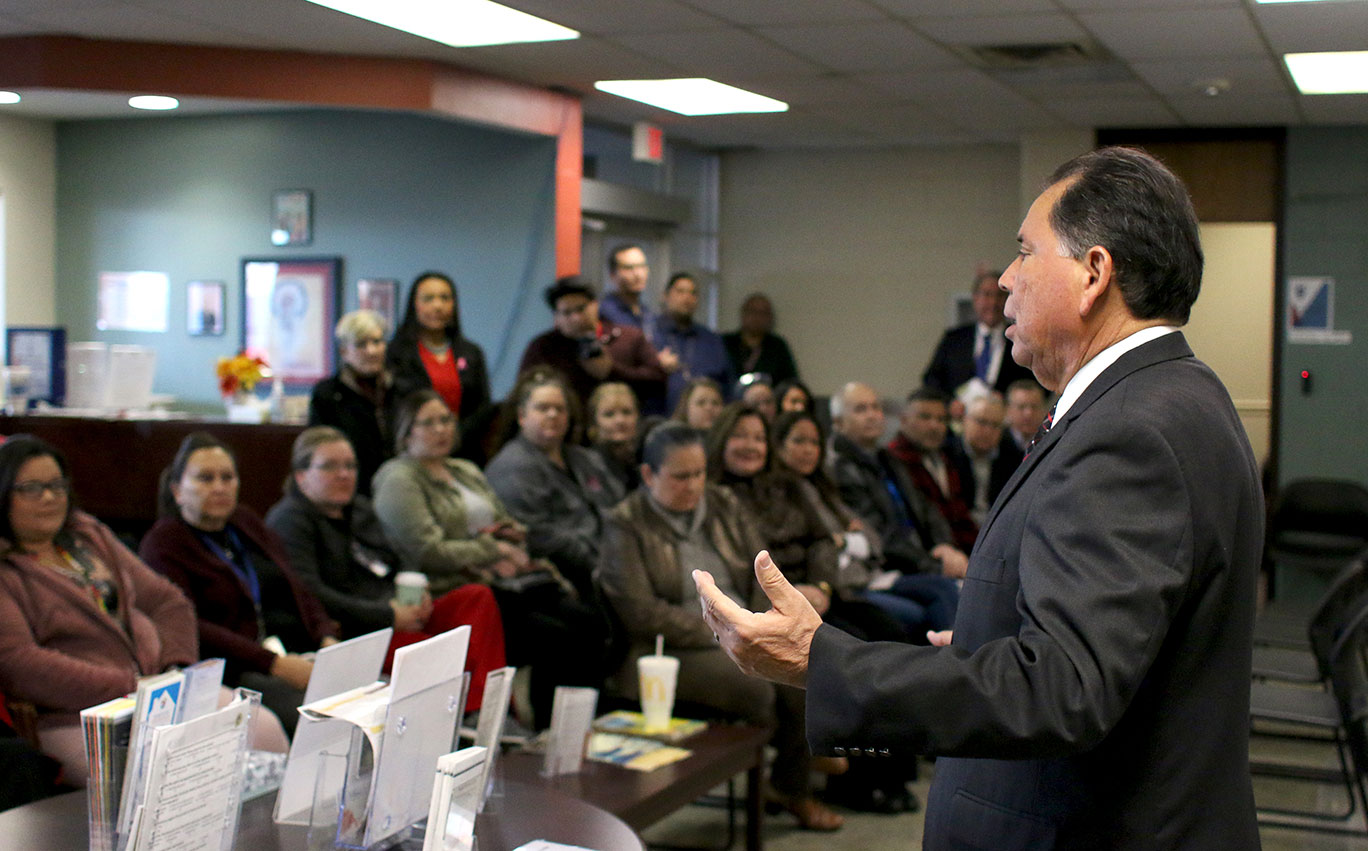 Standing Bear said the Nation’s Campus Master Plan, which was conducted in 2009by the Jim Gray administration, puts the new health center where the ON Trial Court and the Women, Infants and Children (WIC) building are currently located, on the northeast side of the campus. However, he said a second possible site is being considered south of Pawhuska, along Highway 99 on Nation-owned property. “Which has adequate water, sewer and electricity,” he said.

He said he supports the decision to compact the Pawnee Benefit and the Purchase Preferred Care “for the benefit of Osages and non-Osage Indians that come to this clinic.” He said pre-negotiations for the compact begin soon.

“So, the future’s looking very bright.”

In 2010, Dr. Joe Conner (Osage) and his wife Dr. Carol Conner of Paradox Consulting did a qualitative and quantitative health survey of the Nation’s tribal members titled “Health of a Nation: Reservation at Risk.” The 44-page “Evidence Based Health Planning Guide” surveyed 9,850 Osages with a return of 6,602 filled-out surveys for a 67 percent response rate. The survey provided a health analysis of the ON workforce, the Osage Casinos workforce, and a breakdown of “alarming trends” in health behaviors among the Osage people. The study provides statistics on smoking, obesity, mental health and children’s health.

“If you live off reservation and you’re Osage, your life expectancy is 10-15 years longer than an Osage that lives here, and it’s backed by hard evidence. For example, you will see that in 2010 only 17.2 percent of the Osage people live in our reservation area, Osage County. A lot of people don’t know that,” Standing Bear said. “That 80-some percent of Osages don’t even live in Osage County. But, this survey included everyone. Living in Oklahoma, another 32.9 percent, living out of state almost 50 percent of the Osage.”

“And, as we go through [this survey] we see challenge upon challenge that shows that as you get closer and closer to the reservation, obesity, seeking help for depression, everything increases dramatically, double in some cases, and sometimes more than that,” he said. “That’s an argument to take our limited resources and to put them here. Yes, I understand 80 percent of our people do not live here, but when you look at the data to see that here in the homeland our people are challenged by poverty and healthcare services.

“We’ve got to step up here in the homeland, and I can prove it with this data. Dr. Shaw has a copy and my office has a copy.”

“A mammography service in the building that is permanent is something our patients deserve. The trailer method is time-tested but I would like to see a permanent unit. I would like to see specialty clinics such as orthopedics, perhaps rheumatology, and other specialty clinics to reduce the long trips our people have to make to see a specialist or sub-specialist,” Shaw said. “That won’t be true for a majority of referrals but even if it were 25 percent reduction of people having to travel out of town, that would be less problematic. I would love to leave room for the addition of a CAT Scanner, or even an MRI Scanner because we send people out to get enhanced imaging.”

Dr. Shaw said he will also be taking over the Primary Residential Treatment (PRT) program, the TASC program, and the Diabetes Program.

“I have board certification in Addictionology and am very comfortable in that environment with that level of patients, and my heart has always gone out to the suffering addict. I think we can do better. We only have about .60 cents on the dollar to fund services, so we’re underfunded and aren’t really generating any revenue from that level of business,” he said. “I need to find other revenue to augment those services because the goal would be to establish a Center of Excellence for addiction treatment, that’s more like a four-year plan, but there are Diabetes Centers of Excellence and others. I would like to have an Addiction Treatment Center of Excellence for the Osage.”

Standing Bear said the new Hominy Wellness Center will have services for diabetes patients, and he announced they will be breaking ground on a Fairfax Wellness Center soon that will have rooms for counseling and diabetes.