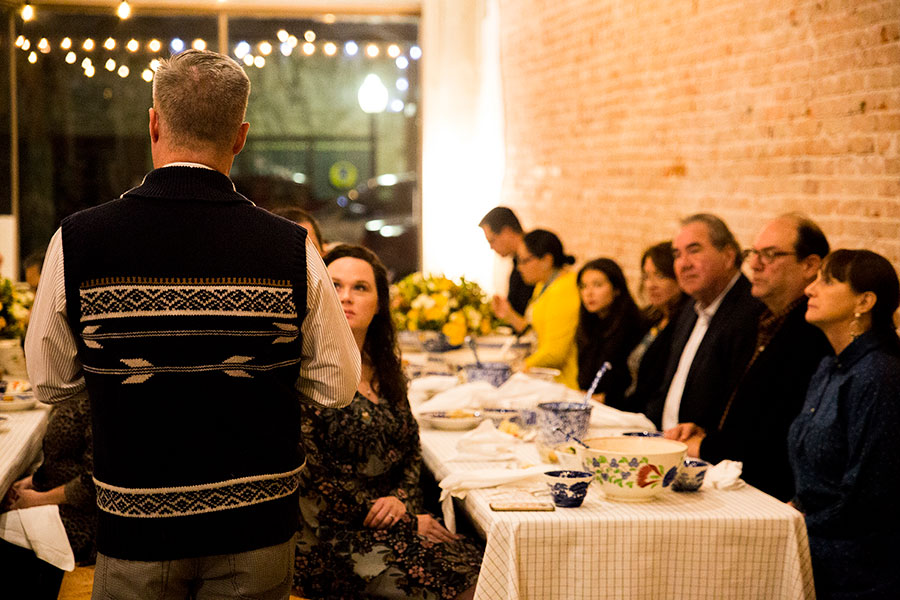 Photo Caption: Chad Renfro speaks to the attendees of a dinner hosting the executives from Imperative Entertainment at The Little Rain Song Loft in downtown Pawhuska on Jan. 25. Photo by Addie Roanhorse

If there was one conversation that Addie Roanhorse remembers from a recent visit by Imperative Entertainment executives is that they want to make a film that tells the Osage story, that tells Mollie Burkhart’s story and showcases her as the heroine.

“We showed them as much as we possibly could in a short amount of time,” Roanhorse said. “We got an email from them last night about how honored they were and how overwhelming it all was. They said it’s clear to them that the Osage people are thriving.”

When Osage Nation leadership saw that the rights had been purchased to David Grann’s bestselling book, “Killers of the Flower Moon: The Osage Indian Murders and the Birth of the FBI,” in March of 2016, Chad Renfro reached out to Imperative and wanted to set up a meeting.

After the initial contact was made, Principal Chief Geoffrey Standing Bear appointed Renfro and Roanhorse as ambassadors for the Nation to spearhead the relationship between the two entities. It wasn’t until Renfro and Roanhorse attended a meeting with Standing Bear at the Oklahoma Film and Music Office in Oklahoma City that they learned there had been a lack of communication between the office and Imperative and as a result, Osage County had not been named as a possible film site. Upon learning about the situation Renfro reached out to Imperative again and arranged for them to visit the Osage.

Roanhorse feels confident that Imperative’s two-day visit on Jan. 25-26 was impactful and it showed them how much the Osage care about the project. Roanhorse is the senior graphic design artist for the Office of the Chiefs, an artist and business owner and Renfro is an Interior Designer and business owner who is also a board member for the Osage Nation Foundation.

“I made a point to tell them, however this story ends up this is going to shape how people will view us for generations,” she said. “We will be talking about this movie and how it impacted our people. Being a mom, I want my daughter to know how strong her people are and that Mollie is the heroine of the story, she is a hero and not a victim.”

Roanhorse said that according to Imperative executives, the first draft of the screenplay isn’t finished yet and that the company is still in the beginning stages of planning. A date has not yet been set for filming.

Roanhorse and Renfro led the executives on a tour of Osage locations and historical sites on their two-day visit, as well as two interviews with Osage elders Mary Jo Webb and Marvin Stepson in the Mason Family home at Grayhorse. Webb and Stepson are featured in Grann’s book.

She said the interview with Webb was poignant and Webb asked the executives if they were filming the movie in Osage County because she wanted it filmed in Grayhorse and Fairfax where the events took place. The executives gave her a general response and said they were still in the planning stages but told Webb that Mollie Burkhart is the lead character.

Mollie Burkhart is at the center of the Osage story in Grann’s book. The plot is centered around the murders that happened to Mollie’s sisters, her mother and the attempted murder on Mollie’s life by her husband’s brother and uncle, William Hale. Their plot was to ensure all headrights within her family passed to Mollie and then by killing Mollie, they would be passed to her husband Earnest Burkhart, a non-Indian. There is a lengthy trial in the book of Burkhart and Hale and it takes place at the Osage County Courthouse that still stands today in Pawhuska.

On the evening of Jan. 25, Roanhorse and Renfro hosted a dinner at The Little Rain Song Loft in downtown Pawhuska, which is owned by Roanhorse and Osage businesswoman Jill Jones. The guests included Webb and Stepson and their families, as well as other local Osages and the two executives from Imperative, Jillian Apfelbaum and John Atwood. The meal, catered by Osage-owned Ah-Tha-Tse Catering, consisted of dried corn, frybread, meat gravy, green beans, salad and dessert. The meal also used dishes owned by Assistant Principal Chief Raymond Red Corn – vintage Blue Spode china, which are used for special Osage occasions.

Apfelbaum is Head of Film for the Santa Monica-based Imperative Entertainment and is a producer for film, television and live entertainment and is currently working on recently acquired Faster, Neal Bascomb’s upcoming novel about French Jewish race car driver Rene Dreyfus, as well as Tangerine, Circling the Sun, The Fifth Season and Sand, according to Deadline.com. Atwood is the CFO/COO at Imperative, according to his LinkedIn profile.

Both Apfelbaum and Atwood spoke at the dinner, expressing their Thanks and appreciation for the visit and the hospitality they had been shown by the Osage. Atwood said Imperative Entertainment was founded in 2014 and that every film they make they put their heart and soul into it. They said their visit was a good faith showing that they will be in touch with the Osage.

After the dinner, Standing Bear said: “I listened carefully to what was said and two things stand out: one is they want to make a movie the Osage will be proud of, and the other is this story will show Mollie Burkhart as an Osage woman who suffered great personal loss and who was strong enough to endure the horrors.”

Imperative Entertainment acquired the rights of “Killers of the Flower Moon” in March of 2016 for $5 million. The screenplay has been entrusted to Eric Roth (Forrest Gump, The Curious Case of Benjamin Button), according to IMDb.com. Producers are Dan Friedkin (Dunkirk) and Bradley Thomas (There’s Something About Mary), and the production designer is Dante Ferretti (Sweeney Todd: The Demon Barber of Fleet Street).