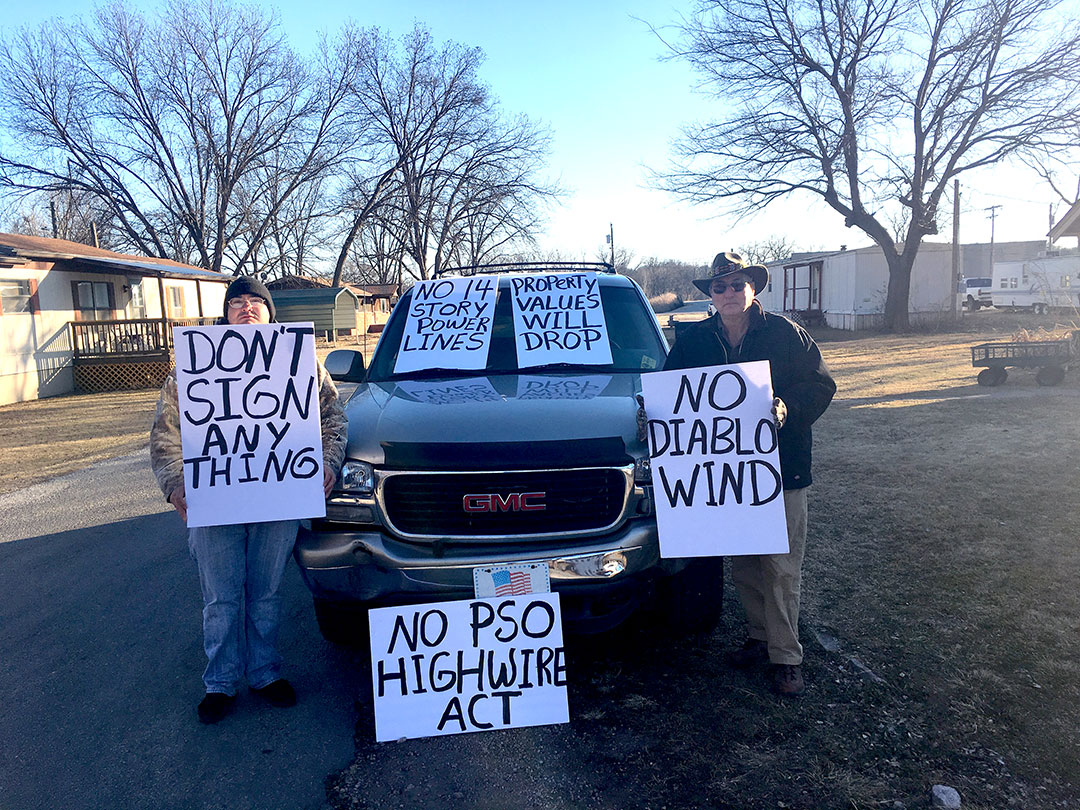 Another wind project may be on the horizon for Osage County

Photo Caption: Osage Nation citizens Scott Lohah and Ryan Bush protest in Pawnee near an AEP-PSO open house on a proposed 800-turbine wind farm slated to go up in the Oklahoma Panhandle. The project calls for part of a 360-mile transmission line to potentially go through southern Osage County. LENZY KREHBIEL-BURTON/Osage News

PAWNEE — Another wind project may be dotting the Osage County horizon in the near future, albeit without turbines.

Pitched as the second largest wind energy project in the world, Wind Catcher Energy Connection is a joint effort among Chicago-based Invenergy, Southwestern Electric Power Company and the Public Service Company of Oklahoma.

The proposed transmission line would run 360 miles from an 800-turbine farm near Guymon to a Tulsa-area substation and then on to additional substations in Louisiana, Arkansas and eastern Texas. The $4.5 billion project is slated to generate 2,000 megawatts of energy annually when it comes online in late 2020.

As the transmission line approaches the Tulsa area, two potential routes are under consideration.

The northern one, first announced in late 2017, would go through northern Pawnee County and far southern Osage County en route to a substation in Sperry. The projected path would have the line enter Osage County north of Blackburn, head southwest between Hominy and the Big Bend area, then continue straight west just north of Osage, Prue and Walnut Creek State Park before eventually running parallel to West 88th Street North and reaching a substation in Sperry.

The proposed southern route, which was unveiled in mid-January, would have the transmission line turn south in Noble County and head towards Drumright in northwestern Creek County. The line would then connect to either an existing PSO substation in Jenks or to the proposed substation in Sperry by way of Mannford and Sand Springs.

“Certainly, when we looked at the map and planned it to be the most direct route from western Oklahoma to the Tulsa area,” PSO spokesman Stan Whiteford said. “Along the way, with 350 miles, there are a lot of things to take into consideration, including rivers, creeks, highways, other existing facilities and sensitive environmental areas. As we imagined, just about everything has come up when talking to landowners.

“We want to come up with something that is mutually agreeable for everyone.”

Although it would not bring turbines into Osage County, the project drew opposition from some Osage Nation citizens during a Jan. 29 open house at the Pawnee County Fairgrounds.

Along with his nephew, Hominy resident Scott Lohah held up signs near the fairgrounds, urging area residents not to sign right of way agreements with PSO. A vocal critic of the wind industry for more than five years, he has protested multiple projects, in part because he feels the permitting and construction process often overlooks the feedback from local residents.

“My first exposure was at the (Osage County) fairgrounds,” he said. “Families were yelling at families, wanting to know why the Osages were there and why were we interfering with jobs. All kinds of hate-filled stuff. Only a handful of people were going to get anything, but the whole room was fighting one another.

“At the next meeting I went to, there was so many Osages there that the vote on the project was delayed.”

Regardless of the route, the transmission line will require a series of 765-kilovolt single circuit lattice towers, each standing about 140 feet tall with a 40-50 square feet base.

In order to qualify for the Department of Energy’s Renewal Electricity Production Tax Credit, construction has to be underway before Dec. 31, 2019, with a higher per-kilowatt-hour credit available if building starts in 2018.

However, in order to get the project online quickly enough, PSO-Oklahoma skipped part of the competitive bidding process for the transmission line and is instead seeking a waiver from the Oklahoma Corporation Commission. A decision is expected this spring.

In addition to having to seek out a waiver from the OCC, the project also faces the possibility of additional tariffs levied by the state. Facing a multimillion-dollar budget shortfall, the Oklahoma legislature eliminated the zero-emission tax credit program for new renewable energy projects in 2017. With the state still eyeing a nine-figure budget gap, legislation has been filed for the upcoming 2018 session that would implement a new tax on wind production.

Meanwhile, a proposed wind farm near Fairfax appears to be off the table.

In late January, more than 20 easement releases were filed with the Osage County Courthouse tied to a 57,000-acre project initially called Amshore Osage. The project, rebranded as Nemaha Windpower after its initial launch in 2016, was the subject of multiple feasibility studies and open houses.

Amshore Wind US did not respond to requests for comment by deadline.

PSO is hosting three open houses in February about its proposed southern transmission line for the Wind Catcher project. All three are scheduled for 4-7 p.m.