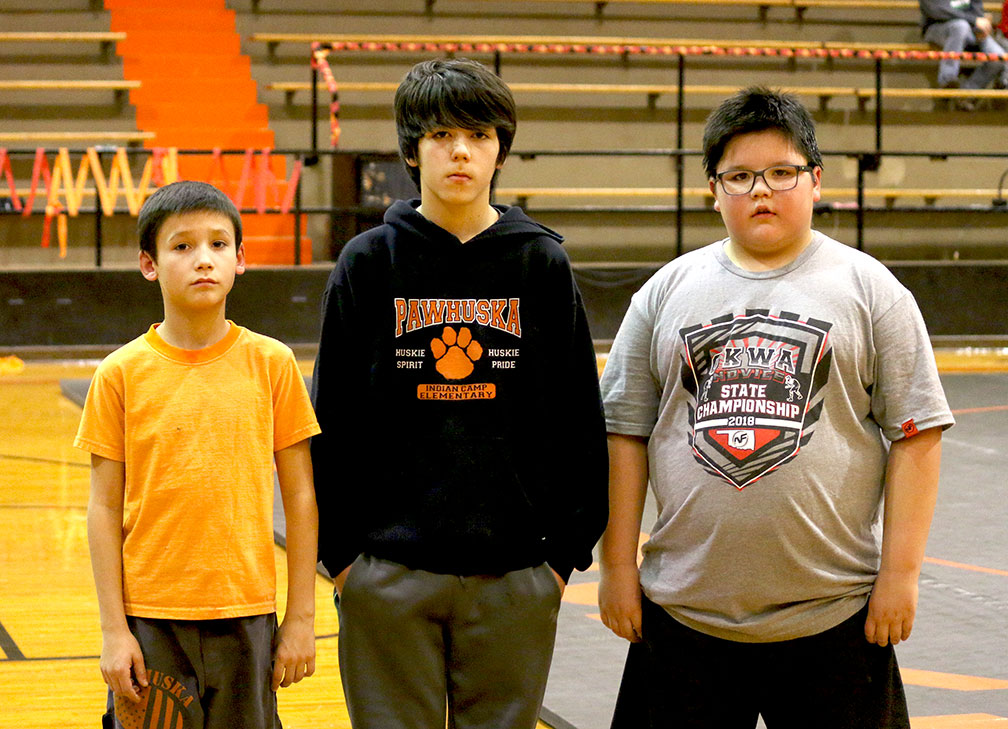 Photo Caption: From left: Dalton Reed, Deacon Hendren and Leighton Shaw. Deacon and Leighton are Osage and are OKWA Novice State Champions and were recognized at the Pawhuska Wrestling Homecoming on Jan. 30. SHANNON SHAW DUTY/Osage News

All three Osage boys wrestle for the Pawhuska Elks Take Down Club and competed in the double-elimination state tournament on Jan. 27, held at the Expo Square Pavilion in Tulsa. The club took seven wrestlers and six came home with medals, including Pierce Kendrick, 8, who was Novice State Champion in Division II.

“I thought they both did a really good job and stayed focused,” he said. “They’ve both been working very hard.”

Nine-year-old Leighton is in the 4th grade at Woodland Elementary School in Fairfax and is driven to Pawhuska twice a week for wrestling practice by his father Bates Shaw. Woodland does not have a wrestling program. Leighton wrestled in Division III, heavy weight, and bested eight competitors in his bracket to become state champion.

“I know he’s improved throughout the year and he’s come a long way because of the great coaching from Adam Kendrick and the other coaches,” Shaw said. “After his first match at Novice State, I could see him really pushing himself to get that goal.”

The Pawhuska Take Down Club has had past successes with their youth wrestling team, producing Novice State Champions in Logan Cass in 2015, and Vann Wildcat in 2016. The current head coach, Adam Kendrick, said his wrestlers are a great group of kids and he wasn’t surprised they did well at the Novice State Tournament.

“I’m not surprised we did well, but I was surprised we came out with four state champions,” Kendrick said, with one of those champions being his son Pierce. “They worked very hard and they earned every bit of it.”

The Pawhuska Take Down Club will head to the OKWA Regional Open Tournament on Feb. 3 at Tulsa Edison High School. If successful, the qualifying wrestlers will head to the 40th OKWA Open State Tournament Feb. 9-10, held at the Oklahoma City Fairgrounds.

Jake, Sammy and Thomas Spotted Bear all placed 2nd at the Regional Tournament and will advance to State. They are the sons of Robert and Lindsey Spotted Bear of Newkirk and they are the grandsons of Jasper and LaVina Spotted Bear Clark of Ponca.

Pawhuska Junior High students who placed at the Regional Tournament and who advanced to the State are LeSharo Wildcat, 8th grade who won 5th place. He is the eldest brother of Vann and Jimmy Wildcat. Jesse Carr, 8th grade, placed 5th and is the son of Justin and Candi Carr.

Lane Cosby, a 14-year-old freshman at Pawhuska High School was Regional Tournament Champion at 80 lbs. in Division V. Lane also won the 2018 Carmen Classic and placed 2nd at the Cleveland tournament this season for his weight division. Lane plays several sports and is the Vice President of the Bluestem 4-H. Lane is the great-grandson of Julia Lessert Kirk Wilson.

All eight boys will wrestle in the State Tournament on Feb. 9-10 at the Oklahoma City Fairgrounds.

Check back with Osage News for updates on the 40th OKWA Open State Tournament.