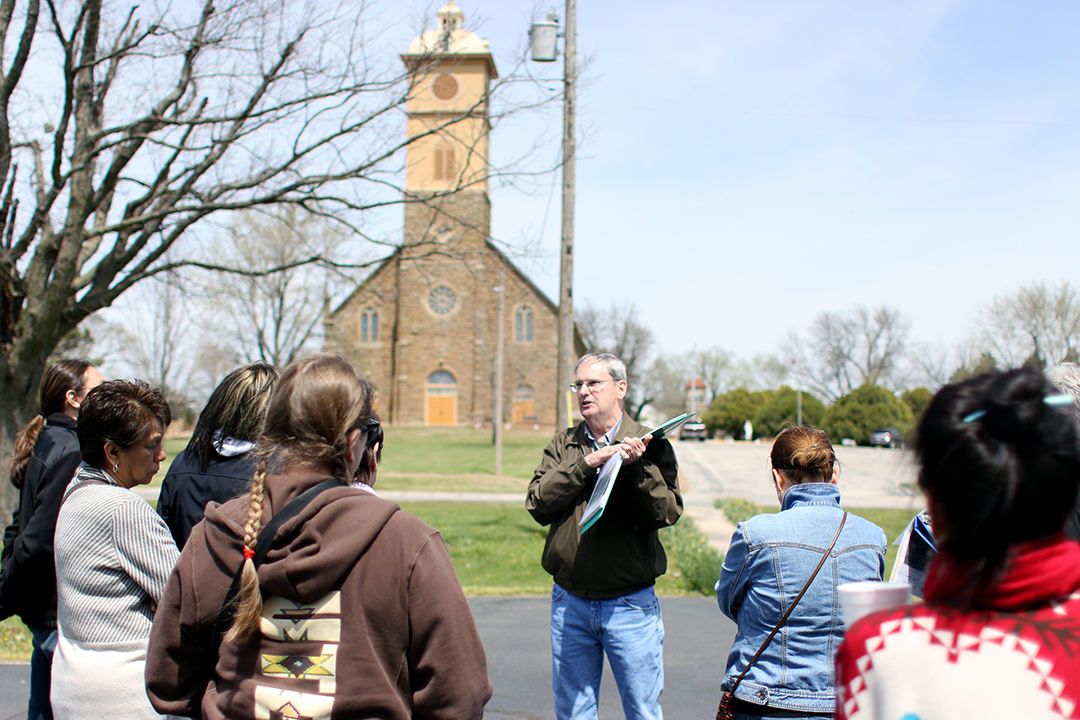 SAINT PAUL, Kans. – The majority of Osages living on the Osage reservation practice Catholicism. The reason why was explained on the final stop of the Osage Heritage Sites Visit.

In 1825 the Osage signed a treaty that ceded what was left of their lands in Missouri, Arkansas, Oklahoma and Kansas and they moved to a reservation in southern Kansas. The lands they left behind had all the locations of their sacred sites, which were essential to practicing their religion. They needed those specific sites to perform their religious ceremonies. With their old way of life left behind, Christianity was coming. It would soon be time for them to choose which religion they would participate in.

According to extensive presentations by ONHPO Staff Archaeologist John Fox and Felix Diskin, a volunteer at the Osage Mission Neosho County Museum, the Osage were heavily influenced by the French. Their connection with the French included early trappers, traders, and priests. According to Fox, the U.S. tried to send missionaries but the Osages preferred Catholics, specifically the Jesuits.

“Send them to the whites; perhaps they may succeed better with them. If our Great Father desires that we have missionaries, you will tell him to send us Blackgowns, who will teach us to pray to the Great Spirit in the French manner,” according to an Osage letter to Commissioner of Indian Affairs on May 10, 1844.

Catholicism had similarities to traditional Osage religion, according to Fox. Priests were a “class” of people, much like that of the Osage’s Little Old Men, or Osage priests. Catholics also prayed to the great mysteries and the Osage’s word “Wakanda” translates to “The Great Mystery.”

The Osage Mission was established in 1847 and most notably, was established by a priest named Father John Schoenmakers. Schoenmakers was instrumental in establishing the strong trust and relationship the Osage had with the Catholic church. He was so instrumental that the Osage word for priest is Shouminka, pronounced Shoo-meen-kah. He is also depicted in the north transept of the Immaculate Conception Catholic Church’s famous stained-glass windows in Pawhuska. He was widely known as the “Apostle of the Osage” and worked among the Osage for 36 years until his death in 1883. He is buried in the Saint Francis Hieronymo Cemetery next to the Osage Mission in Saint Paul.

Shoenmakers, Father Paul Ponziglione and Mother Bridget Hayden of the Sisters of Loretto, were the most influential during that early period of Catholicism for the Osage. Schoenmakers established an Osage Manual Labor School for boys, the Sisters of Loretto established the Osage School for girls. The Osage provided materials for the school and in reports of the priests they defended the convent from a band of Sac and Fox at one time. The Osage helped pay for a bell for the church in 1876, which is still rung in a tower outside the current church.

“Osages willingly sent their children to these schools,” Fox said. “That was always a very important part of Osage life, was learning. They always enjoyed learning about the cosmos, ways of life, so they always valued education.”

However, not all Osages wanted their children to go to school. In one of the priest’s accounts at the Mission, in 1859 an Osage man named Tanassa murdered his wife after she sent their young daughter to the school for girls. He came to the school yelling for his daughter to come out. The Sisters told him his daughter was not there and “brandishing his tomahawk” he yelled he would start killing the Sisters if they did not send her out. Schoenmakers heard Tanassa and persuaded him to come to his office where he tells him he needs to go into hiding because if the other Osage men hear of his behavior he will be in great danger. Tanassa flees to the woods but not before other Osage men hear what he has done. At daybreak, a party of Osage men rides after him. “They got on his tracks, and meanwhile he was trying to hide behind a pile of fallen trees, they fired at him, and killed him,” according to the account. Schoenmakers believes Tanassa would have killed his daughter if the Sisters would have sent her out. The daughter and another orphan were sent to live with another family in Kansas.

The Osage traditionally had three annual areas they would move to each year. For the winter, they camped in southern Missouri and northern Arkansas where they would take shelter from the winter among the trees in the mountains. During the summer and fall, they camped in southern Kansas and northern Oklahoma where they hunted bison in the Tallgrass Prairie. Ponziglione accounts of riding in grass as tall as his horse in prairie as far as the eye could see. The remainder of the year was spent in their traditional villages which were located in a large portion of western Missouri and bits of western Kansas. Each time they moved they moved away from their waste to start anew in their campgrounds each cycle. Remaining in one place was new for them and it took its toll.

Disease spread, causing a sharp population drop, according to Fox. A measles outbreak in 1852 at the Mission spread to villages, killing hundreds. The U.S. government wanted the Osage to be farmers, but they were not farmers. The lack of food caused famine and scurvy.

In 1865, the Osage were forced to sell a large portion of their Kansas reservation due to pressure from railroad companies and illegal settlers. The Osage knew they would have to leave Kansas soon. Since the U.S. government had paid the Osage $7,000 per year for 20 years in money or goods and bought the majority of their Kansas reservation, they purchased land back from Cherokees and moved to present Osage County by 1872.

The influence of Catholicism held among the Osage and the priests from the Osage Mission still visited the Osage in Oklahoma and the Osage sent their children to Catholic schools.

When the participants of the Osage Heritage Sites Visit toured the Saint Francis Hieronymo Church in Saint Paul, some sat and prayed in the church. Diskin took them on a tour of the church and then took the participants to the church’s cemetery, which sits across the street. The first place he took them to was to a mass grave of Osage people who had been buried in the church’s cemetery before it was moved to its new location. He said the mass grave of Osage people is not something the Catholic parishioners of Saint Francis Hieronymo Church like to talk about or are proud of.

Osage elder Margaret Bird and Osage Nation Historic Preservation Officer Dr. Andrea Hunter laid sage wrapped in a red, white and blue ribbon at the mass grave. Diskin said it is unknown as to how many Osages are in the concrete vault or what their names are. In the 1970’s he said the Saint Francis Hieronymo Church moved its cemetery across the street. The Osage bodies were put in a concrete vault and reburied, while the non-Indian bodies were individually reburied. Marking the mass grave are two small tombstones that say, “Indian Graves” and one tall tombstone with the name Charles N. Mongrain. ONHPO staff member Kilan Jacobs said a prayer for the Osage people in the Osage language at the site. The sage and ribbon were prepared and provided by Margaret Bird beforehand, having visited the graves before.

Diskin also showed the participants the graves of the priests who had served at the Osage Mission to the Osage, including Schoenmakers and Ponziglione.