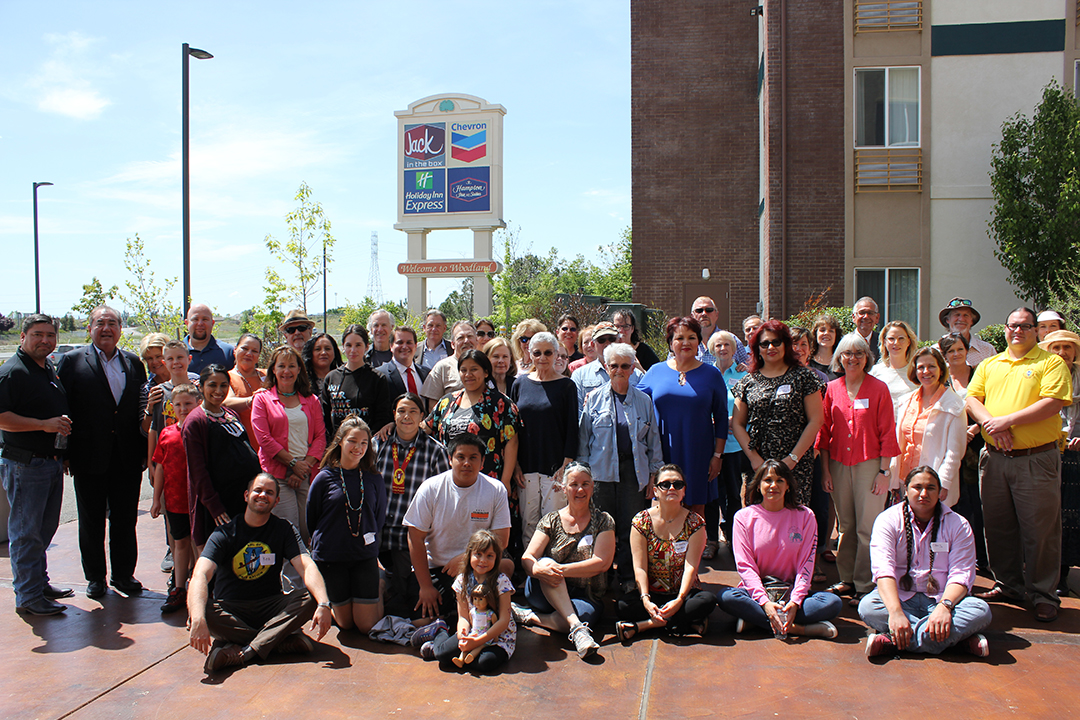 Over 50 attendees, including the region’s constituents, their families and candidates attended the day-long event held 15 miles northwest of Sacramento in a Woodland hotel conference room. Members of the NCO steering committee organized the gathering, which included a moderated question and answer panel for the candidates. The questions came from attendees that touched on various topics including the government structure, economic development, health, Congressional office practices and the Osage Minerals Estate.

On a question regarding candidate attendance to observe Congressional sessions, Congressional candidate and Congressional budget analyst Eli Potts said his work attendance record was great and he recently missed one day for his wife who is expecting their first child in June. In his introduction, Potts said he has 10 years of public service experience and added: “I believe to move our Nation forward, we need Osages to look at our records of service, the new ideas that we’re going to bring to the table and what that means for the future of the Osage Nation.”

Congressional candidate Mary Jo Pratt said she has not been able to attend the sessions due to her work schedule, but keeps up with the Nation’s updates and said she’s running for office because she “feels our process is lethargic, I do work a full-time job and when I say that I was up until 2:30 a.m. working with my legal department on a contract to push through, so my customer can go live on Monday, it was worth $58 million, before I slept for three hours, jumped on a plane to visit all you lovely people.” The attendees laughed as Pratt continued and said, “if elected, that will change significantly, and I plan to dedicate myself full-time to this position.”

On a question for Executive Branch candidates, those four individuals were asked to “characterize your own leadership style and what are its strengths and weaknesses?” Principal Chief Geoffrey Standing Bear responded first stating “I like to find good people and give them responsibilities and support them … when you delegate and support them, you have to understand we all make mistakes, so people who work for me understand I expect them to show up for work, work hard and don’t be afraid to make mistakes and remember all of us have faults, so the job is to pick each other up, not criticize.”

Congresswoman and Principal Chief candidate Maria Whitehorn said her leadership style “is to be an encourager, we have a lot of really smart Osages, they need to be given their hat, they need to be encouraged to know to come to you with their ideas and that they’re going to be welcome … I think that you build people up, that you encourage them, I think that you give them a plan and a roadmap for what your expectations are.”

Assistant Principal Chief candidate and Congressman Otto Hamilton said he has a project management background “and you have to get people’s buy-in to be on the same page.  If I don’t have your buy-in, I’m going to work with you and find out why … Everyone should be on the same page … working with Congress, we’re 12 individuals and sometimes we have 12 different ideas, but one thing we agree on is we want what’s best for the Osage people.”

For Congress candidates, Scott BigHorse, who is seeking Congressional office, said he wants to see a journal record that keeps attendance, track Congress members’ sponsored legislation, and track of votes on how Congress members voted on legislation. “I want to commend Congresswoman Goodfox for the recent legislation she has put out there dealing with our children. That’s another reason I am running is because our foundation is not complete yet, we’re still a young government, there’s still some things that need to be put in place to protect our women through (the Violence Against Women Act and the Indian Child Welfare Act) … We need to have our own facilities so when our children are being taken away, they’re placed with Osages.”

Angela Pratt, currently Congressional Speaker seeking a second term, responded to a question asking candidates what they believe are needs of California Osages and said she took questions on what other services are available during other recent candidate events in Texas. “Until we get better at economic development, there’s not a whole lot more we can do (in addition to the health benefit, scholarship and burial assistance services for all Osages). Most of the programs within the Nation have federal funds tied to them, they are mostly income-based, so we’re not all getting a whole lot more until we get better at economic development,” Pratt said.

A submitted question asked the Congress candidates what type of legislation they would introduce if elected or re-elected. Congressional candidate Geneva Horsechief-Hamilton said she would sponsor an appropriation bill for a stimulus for younger Osage generations, “so for every newborn Osage, we would provide them with a (small) investment in our future.”

In a question regarding the Osage LLC money losses and economic development endeavors, Congressional candidate Brandy Lemon said “we have to do a better job of vetting (economic development LLC) board members, we have to get hard-nosed, we have to scrub the resumes … why aren’t we having a Congressional hearing about confirming these board members so that we can get it out there to you also? You can let us hear what you’re saying, and we can do a better job of putting the right people in the right places.”

Congresswoman Alice Goodfox said one business endeavor the Osage Nation should not be involved in is recreational marijuana, which has been discussed on the campaign trail. “Oklahoma has not voted on it yet, but I have some very strong opinions on that – We put money into prevention and treatment to keep our Osage people away from alcohol and drugs and I have a really hard time of going down that road thinking we would try to use that as a way to gain money for our Nation to give to our programs and services … There’s different things that we need to look at and that’s an area I would like to not be going down that road.”

Horsechief-Hamilton followed-up on Goodfox’s response because she started her Congressional campaign platform stating she is “pro-cannabis industry and the reason why is because this is an Indigenous plant, it’s a medicinal plant and I have people who I love who actually need this plant and I know veterans who are fighting for our lives and suffer from (post-traumatic stress disorder) and go through things that I don’t think any of us can imagine … But there’s something out there that’s holistic, that isn’t going to be a pill that ruins your organs, that isn’t going to cause you to be addicted to opiates because our biggest gateway drug on the Osage reservation is Budweiser, after that it’s Marlboro … It’s not about recreation, it’s about medicine, it’s about good medicine for our people and making money.”

Congressional candidate Michael Kidder said the LLC ventures with money losses were bad ideas “and we learn from them and we need to continue to not be afraid to go after these investments, let’s go off what we learned, do a better job, vet people and get in the right people. There’s a bunch of business models out there we can follow … Working out in the private world, I’ve had my own business, I’ve had my money in the game, it’s tough out there when you’re doing it yourself … We need conscious people in the right spots.”

Four first-time Osage Minerals Council candidates attended the NCO gathering who were Paul Revard, Margo Gray, Susan Revard Forman and Marsha Harlan. The candidates fielded questions including one asking what is the function of the Minerals Council?

Revard, a seasoned oil and gas producer in Osage County, said he hasn’t been able to locate “some literature or regulations as to what their functions are, but it’s very limitedly described as to administer and develop the Minerals Estate … they have pretty limited powers as far as the operations of the oil and gas activities, they are responsible for negotiating and entering into oil and gas leases with the producers. We used to hold quarterly auctions of the leases … The Superintendent of the Bureau of Indian Affairs has to approve every oil and gas lease, but the Minerals Council itself has really no hands-on governance over the oil and gas operations, it’s really in the hands of the Bureau of Indian Affairs.”

Harlan, who serves as a judge and attorney for other Oklahoma tribes, said the Osage Constitution “sets out what the Minerals Council is: It’s an independent agency of the Osage Nation tasked with protecting, preserving and administering the Minerals Estate and that’s what we’re supposed to do. We’re supposed to do our best to take care of our shareholders, to take care of the Minerals Estate, which is oil and gas and coal and anything that comes up from the ground. We own those subsurface rights, that’s what this council is supposed to do. I don’t think they’ve done a good job in recent years, that’s why you see these new candidates here.”

Margo Gray said her professional background comes from business development, overseeing businesses, creating new opportunities “and that is why I felt it was important to be here because even though it says we administer, we want to make sure that we’re vigilant watchdogs over our accounting.” Gray said she felt alarmed after seeing a report by Forman stating that shareholders have been underpaid at least $60 million since the 2011 Osage settlement “and that’s when it went off in my head, OK it’s time for me to step up.”

Forman, a seasoned natural gas marketing professional, said she believes “we have the expertise sitting here at this table to think about restructuring what we do. Nothing’s written in stone, we can get the Congress’s help and the Executive (branch’s) help and start identifying what our true mission is and what we can do to truly administer and manage so we will get market value for our natural gas and natural gas liquids, that we’ll drill wells, we’ll make sure we do it in an environmentally responsible manner. We’ve got a lot of work to do and we need people that understand tribal law, that understand the drilling process and exploration process and the people who know how to market it at market value.”