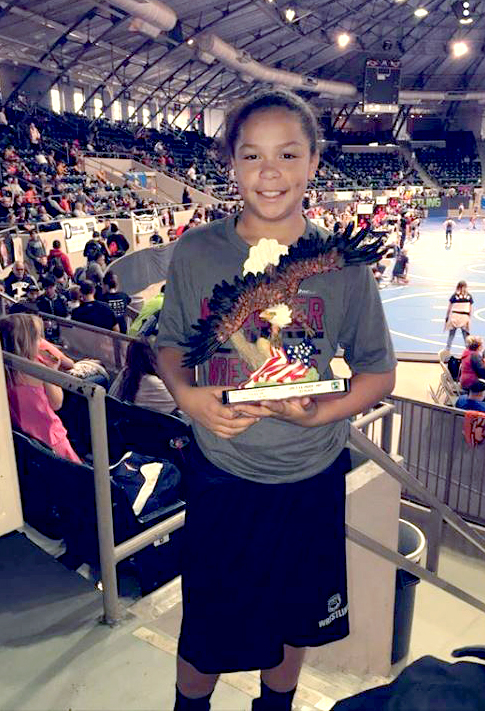 Since the age of 5, Tylen Edwards has been wrestling boys to the ground. It makes sense because her father is a former Oklahoma State University wrestler and her mother a College basketball player, but neither parent could predict their youngest of six children would be the 2018 Girls Flo Reno World Champion at the age of 10.

“This was our first big out of state tournament,” said Tylen’s mother, Cindee Edwards. “We were excited and nervous the entire time.”

She said it was nerve-wracking watching her daughter wrestle for the World Championship, but for Tylen, it was just another match she knew she could win.

“I practice on my brothers a lot. I’ve been wrestling for four years,” Tylen said. She said she likes the challenge and her favorite go-to move is the “over and under,” where she hooks her opponent under the arm and then picks them up and slams them on their back where she goes in for the pin.

On the weekend of April 5, Tylen and her family traveled to Reno, Nev., where she would wrestle and win the 2018 Girls Flo Reno World Championship. She would also walk away with the coveted and rarely won, Trinity Award, which goes to a wrestler who has won all three major Girls Flo tournaments – which Tylen won the 2017 Flo Girls Kickoff Classic in November and the 2018 Flo Tulsa Girls Nationals in January of this year.

Tylen is in fourth grade at Wagoner Elementary School where she also plays competitive softball with Tulsa Elite and rodeos. She competes in barrels, poles, and flags. She stands at about 5 foot 3 inches, weighs 125 pounds and wrestles in the heavyweight division for the Oklahoma Kids Wrestling Association. The heavyweight division is for girls weighing 100 pounds to up to 160 pounds. To win the World Championship she wrestled against girls from California, Washington, Hawaii, Oregon, and Oklahoma.

Her father, Brian Edwards, has been coaching her since she was 5. Her father is also the high school softball, wrestling, and baseball coach for Wagoner Public Schools. He is also taking his daughter to the same wrestling tournaments where he won when he was a kid.

“As far as coaching my daughter, I coach her like I do any other kid I’ve coached over the years. It’s a little tougher coaching your daughter, your youngest daughter anyway. Tylen, she really takes it all in, with me coaching and her learning new moves and things like that. It’s been a good experience for us since she started wrestling,” he said. “Her approach to wrestling, when she goes on the mat you can tell she’s ready to go. When she’s not wrestling she’s just that happy, bubbly, 10-year-old kid but when it’s time, she flips the switch and she turns into a more physical and focused wrestler. That’s something you can’t teach in athletics, to be able to have that, to be able to flip the switch.”

Cindee Edwards said when Tylen first started wrestling her only opponents were boys and they didn’t know of many other girls wrestling at that age. It wasn’t until the past two years they have noticed more girls wrestling and there are now a fair number of all-girls wrestling tournaments.

Her trophy case is full, and she jokingly said she would have to put her bronze eagle statuettes on the floor. She has won four bald eagle trophies and one gold eagle trophy from the World Championship Reno tournament; four singlet wrestling uniforms; two rings; three hoodies and numerous medals in the past year.

As for what’s next, Cindee Edwards said Tylen will keep wrestling and next year she will be in the 12 & under division, wrestling girls stronger than her and who have possibly turned 13. “So, it will be a tough year.”

Tylen Edwards is the daughter of Brian and Cindee Edwards and the granddaughter of Marilyn Boucher and Jesse and Jerry Edwards.