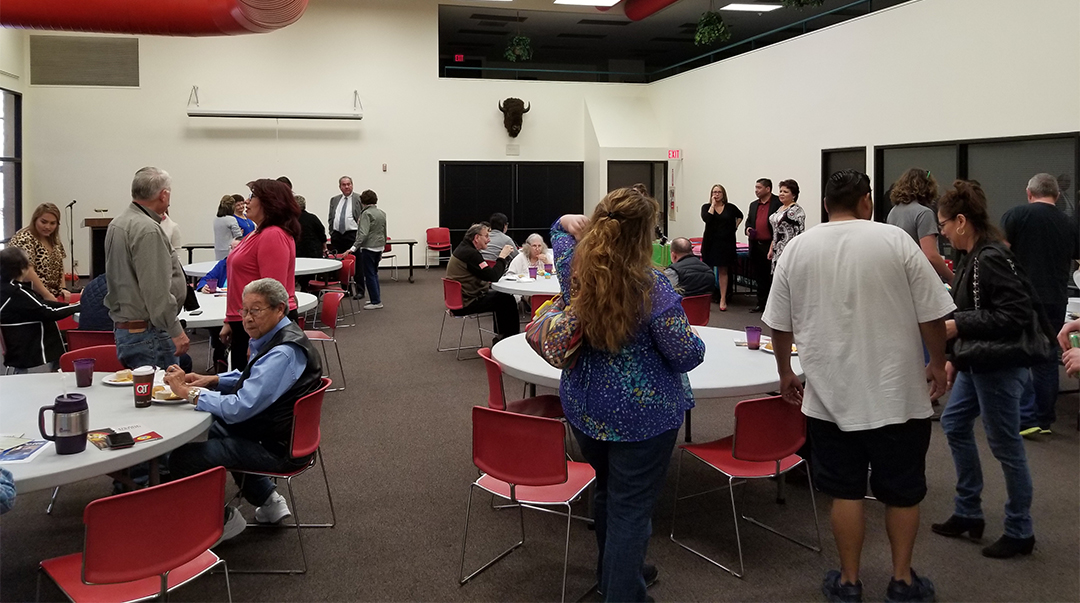 WICHITA, Kans. – Candidates seeking office in the 2018 Osage Nation and Osage Minerals Council elections traveled north to the Sunflower State to meet area voters and to share their reasons for seeking office.

On March 31, approximately 40 people attended the Wichita Area Osage Gathering organized by Amanda Proctor, who is seeking ON Congressional office, and her sister Susan Proctor Kneeland. Both sisters grew up in the Wichita area and hosted the afternoon event at the Mid-America All-Indian Center where attendees socialized with candidates and among each other.

The sisters invited the candidates to join them at the event where each individual was allowed time at the microphone to share their reasons for seeking office.

Principal Chief Geoffrey Standing Bear, who is seeking a second term, said the Nation has great programs for Osages, but noted “we’re going to have to find a way through to increase that money in the amount of funds we receive from our casinos and that is a challenge. In the 2018 fiscal year, the Nation has budgeted $9.3 million for the health benefit programs, $8.1 million for scholarships and $450,000 for burial assistance … If we work together we can do amazing things. One example is on Dec. 23, 2015, when I got the call that Ted Turner’s ranch was going up for sale. I worked with our gaming board with the money and we went to the Congress who gave a maximum amount that we could bid for and we went through that process and was successful … We worked together and pulled it off in 30 days.”

Standing Bear discussed various initiatives made by the Executive Branch during his first term including the Osage language immersion school and the language app for smartphones and tablet devices. “We have not only reversed the loss of our language, but we’ve reversed the loss of our land – not just the 43,000 acres from Bluestem (ranch) – but we’ve purchased 6,400 acres with Cobell federal settlement funds in key locations and interest throughout Osage County… I’m running for one more term to try and keep our immersion programs, our daycares, all our scholarship programs, health systems, all of our land purchasing, everything going because we’re going in new directions and we’re fragile. And I’d like one more chance from you to keep it going with the teams that I put together and I’m looking for a Congress and a Minerals Council that I can work with.”

Congresswoman Maria Whitehorn, who is running for Principal Chief, said she is seeking office because she believes there is a communication problem with the current administration. Whitehorn acknowledged the sequence of events to purchase Bluestem Ranch occurred with communication from the officials involved but added: “Right now we have a good ranch board, but we don’t have a good communication system going with the Nation. We own the land, we have an ENR department that should be doing some land management, but through miscommunications we’re not working together… We should be progressing, we should have plans, we expect our boards, the ranch board, to present us a plan… As your Chief, I would like to have an economic development director that actually plugs into our enterprises … You can’t tell them what to do, but you can exercise oversight, you can be engaged with them, you can tell them your expectation of them is to make money … Until we’re looking at economic development in a holistic way, we’re never going to be able to move it forward.”

“As your Chief, I promise you I will get in front of those issues, I won’t be chasing behind them. We have issues coming up at the local/ county/ state level, which is our (Public Service Company of Oklahoma) transmission line, that’s a two-fold issue that’s going to affect your Minerals Estate and affects restricted landowners … We need to be out there protecting our people’s interests. I haven’t seen comment, I don’t know what this administration’s focus is or the direction he wants to take us on these issues. I just want to say there are many issues facing us – nothing but good communication and cooperation and the ability to sit down and talk and relate to people will help solve them. Our (ON) Supreme Court cases was because information was not given to the Congress, that’s why the legislation was written in the fashion that it was and that information was asked over a month before the session started … Communication is key, planning is key and as your Chief, I will be a good communicator and a planner and I will listen to your voice, we’re going to have a Chief’s Council that you can speak into if you so choose to join.”

Andrew Yates is seeking re-election to the Minerals Council for a third term to continue handling the ongoing issues facing the OMC including issues with the Bureau of Indian Affairs. Yates said he has over 37 years of experience in the oil and gas industry and has worked for the newly-renamed ON Department of Natural Resources (formerly ENR department) for the last 34 years. “If elected, I will continue to represent the shareholders, please vote for me on June 4 … I oppose the wind farms, it’s good in some places, but not on our pristine prairie … (the developers) should put it somewhere else, thank you for your time.”

Brandy Lemon is seeking Congressional office and also added she supports the Nation’s seven-Osage Casino enterprise “because without our casinos, we would not have the scholarships that we have and all these other ventures that we have – ultimately the casinos are our bread and butter and we don’t want to toast it.” Lemon said she also believes in good communication, which is crucial in the nursing field where she works. “It is very important to communicate and not take everything personal, not attack personally, and to really hear what that person is saying, and people can open their minds and open the lines of communication … We need to talk about how we’re going to take care of our elders … we’re talking about possible nursing homes, an entire facility, I would like to see that for our people one day.”

OMC candidate and businesswoman Margo Gray said if she’s elected, she will bring her business expertise to the table. “I understand the need for economic development in our Minerals Estate, we’ve missed that for such a long time, in order for me to do that, I’ve got to be elected in. My other goal is to monetize our oil and gas estate … I know how to talk, I know how to negotiate, I also know how to negotiate the best price … In looking at the big picture, I want to increase your check. And how do I get there? It’s by working with people who are like-minded that they want to see it grow … We have the opportunity to be the next Southern Ute and Three Affiliated Tribes, but we do it on our own terms and we do it by communicating together.”

ON Congressional candidate and business financial analyst Mary Jo Pratt said her educational achievements include degrees in accounting and a Master of Business Administration. Pratt’s professional experience includes working with tribally-owned 8(a) businesses “and my specialty with that would be to stop the (money loss) bleeding and make them profitable – going in and evaluating and analyzing on why we’re losing money and how to turn it around to start making money … Education is very important to me, it has given me the means to hold the job that I’m doing today … and so that’s something I think we need to put as a priority and say this is what we want for our children and grandchildren as well.”

ON Congressional candidate and Tulsa City Fireman Colt Herren, who lives on his family’s ranch near Skiatook, said he would like to see stronger environmental laws to take care of spills and damages to the land and to make sure the Social Services Department (whose services he used to adopt a child) has the funding and services it needs. Herren said he also would like to start efforts to establish a Nation-run ambulance service to serve the vast Osage County. “I would love to see the tribe start an ambulance service to serve the rural areas and also work with the city governments, but it could be a great asset to our tribal members and could also be a good revenue source if it’s ran like a business,” he said.

ON Congressional candidate Clair Wood shared her recent professional experience in working with the Nation, which includes a short-term stint as a Congressional legislative assistant, a Gaming Commission investigator and as director of the Child Care Department. In January, Wood started her first semester at University of Tulsa law school and works on contract with the ON Executive Branch to help compile data in applying for a grant toward building a charter school. If elected, Wood said she will vote based on her own decision making and would work toward solutions to resolve inter-government animosity that creates communication and cooperation problems.

ON Congressional candidate Michael Kidder, who works in energy sales and also serves on the ON Gaming Commission, said he would continue supporting current ON government programs and services including scholarships, helping elders and providing housing. In his gaming commission board experience, Kidder said the commission worked to reduce operations and costs to cut down on bureaucracy and redundancy in duties. “When we came onto the Gaming Commission, we were bloated, bureaucratic, lots of top-heavy people … we streamlined what we had, we are very efficient as far as we are in the Gaming Commission,” he said.

ON Congressional candidate and current Congressional Office budget analyst Eli Potts said one of the reasons he is seeking office is to follow a lesson his mother (former Osage National Councilwoman Cheryl Potts) taught him as a child, which “is to give back and serve … Since 2015, I’ve been working as a budget analyst and now I’m trying to serve you in Congress.” Potts said, if elected, he is committed to paying off the Nation’s (loan) debt and “we need to invest in some local economic development and I believe my experience with Chickasaw Nation Industries plays into that and what we need to do to invest in small businesses to help jumpstart our economy.”

Proctor used her microphone time to discuss the significance of the gathering venue, which includes a museum displaying arts, crafts and clothing and cultural instruments from the region’s plains tribes. “I’d like for everyone to appreciate this building (constructed in the 1970s by grassroots efforts without a specific tribal backing) and to remember this building. I think our Wichita area Osage group should plan on meeting here every year at this time and in this location, that’s what this building is here for … members of the local urban Indian community to have meetings, have arts and crafts classes, to have language classes, to have dance classes … I’m seeking a seat on the Osage Nation Congress, I’m a Harvard graduate, I’m a local Osage County attorney, but this is my home and it’s so wonderful to see so many friends and family.”