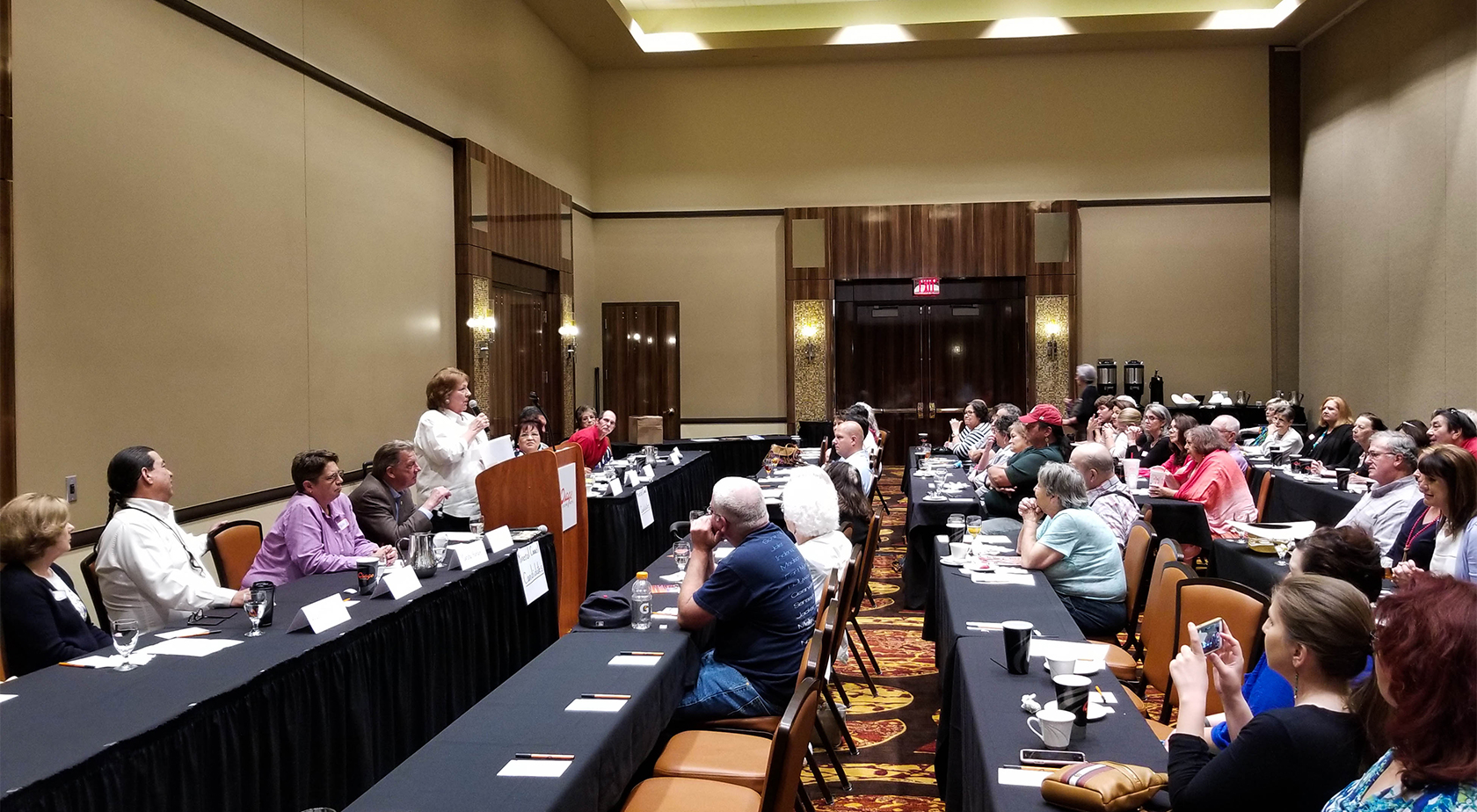 Candidates discuss the BIA, one-man one-vote, and other issues at OSA Candidate Forum

Photo Caption: The Osage Shareholders Association hosts a candidate forum on May 20 for those seeking Osage Minerals Council office in the June 4 election. Moderator at the podium is OSA Vice President Lou Phillips with nine candidates participating in the forum at the Skiatook Osage Casino Hotel. BENNY POLACCA/ Osage News

Hosted by the Osage Shareholders Association, the three-hour forum featured questions submitted by attendees and drawn at random.

The only question to generate a unanimous reaction from the participants was whether any objected to family members serving together on the council. With several acknowledging that they were related to at least one other person on the panel or currently on the minerals council, none said they saw it as a problem.

“That decision is in your [the voters’] hands,” Talee Redcorn said. “There is nothing in our laws to prohibit family members from being elected to the same branch.”

Other than being OK with possibly sharing the council chambers with a close relative, the candidates had consensus on little else, including whether the 1906 Act and the tribe’s Constitution are in conflict with respect to the mineral estate.

“We need autonomy to be able to act without outside interference,” R.E. Yarbrough said. “If something needs to change, it is our Constitution. It’s just a piece of paper and can be changed.”

The role of the Bureau of Indian Affairs with respect to the mineral estate also drew mixed responses. Multiple candidates also said they view the federal government as the biggest single threat to the mineral estate, with the BIA specifically singled out for its role in the drop-in drilling activity in recent years.

“The biggest threat comes from the BIA,” Linda Heskett said. “The BIA has numbers that we need and won’t release them. The Donelson case is over, and we now need to go after certain people there who’ve stopped us from drilling.”

On the flip side, several called for the BIA to take a more involved role as a trustee in addressing the hundreds of abandoned and orphaned wells dotting Osage County.

“It’s the BIA’s responsibility to help address the abandoned wells,” Paul Revard said. “They let those producers go and leave all these environmental and safety risks to the surface owners.”

Among the other questions asked that drew a mixed reaction from the candidates was whether to implement a one man, one vote system for future minerals council elections.

Although every eligible shareholder may cast a vote, each ballot does not necessarily carry the same weight, as each ballot carries the same value as the voter’s headright interest as shown on the last quarterly annuity roll.

While Margo Gray, Andrew Yates and Susan Foreman indicated they would at least be open to discussing the matter or holding a referendum on it, other candidates were less receptive to the idea.

“I am totally opposed to one man, one vote,” Marsha Harlan said. “However, having said that, if there is a referendum on it and I am elected, I will follow and honor those results.”

Voting for the eight Osage Minerals Council seats is restricted to tribal citizens older than the age of 18 whose names appear on the quarterly annuity roll at the Bureau of Indian Affairs’ Osage Agency as of the last payment prior to the election.

The election is scheduled for June 4. The lone polling place, the Minerals Council’s chambers at the tribal complex in Pawhuska, will be open from 8 a.m. to 8 p.m.