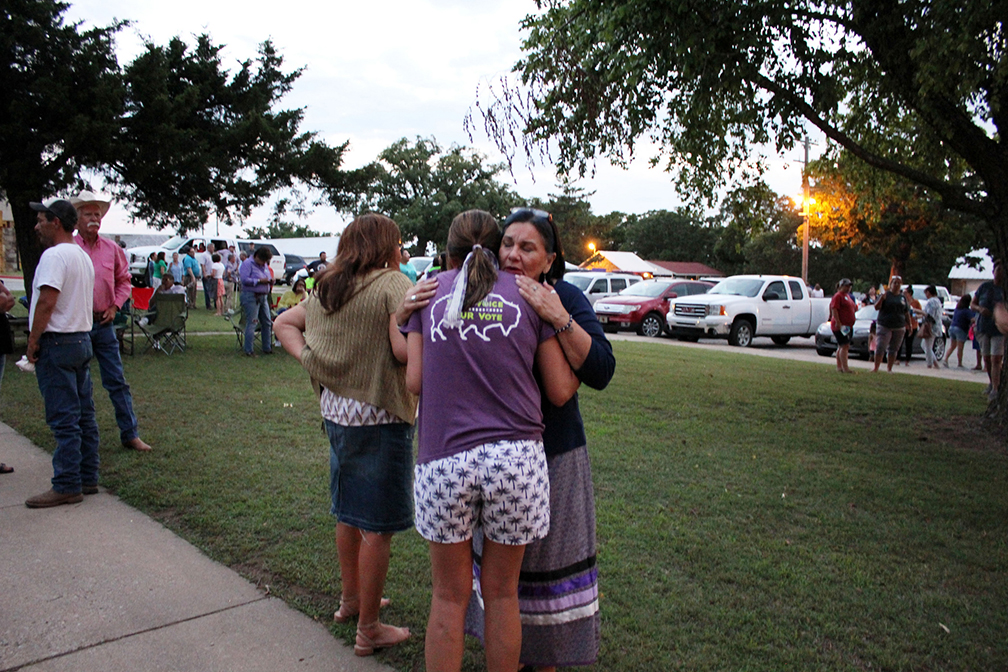 ON Election Supervisor Alexis Rencountre announced the results at approximately 8:40 p.m., which is less than an hour after the polling place closed, setting a new record and catching some candidates off-guard as they were still cleaning their campsites. A far cry from the 2014 election results, which were announced at 4:41 a.m. The ON Election Board will certify the results barring any requests for recounts in the general election within three business days from the election results announcement.

Standing Bear said “I am honored and humbled the Osage people have again placed their trust in me. We want to continue working on objectives and priorities for the Nation with the new Osage Congress. In the future, what we need to do is work on expanding and increasing our healthcare services including the building of a new Wah-Zha-Zhi Health Center. In August-September, we will address other issues including higher education scholarships, health benefits program and burial assistance.”

Red Corn expressed thanks on Facebook after the election stating: “I offer my sincere appreciation to everyone who supported my candidacy and this administration with a vote of confidence. And, thanks to the many who fearlessly put their hat in the ring, regardless of the outcome. It takes courage to run, more than a little bit. Some have succeeded this round by getting up, dusting themselves off, and trying again after previous disappointments. We owe them all a debt of gratitude for participating in this process.”

Red Corn also thanked Standing Bear and wrote: “Together we have built a workable relationship between two positions chosen strictly by the people, and not by the office holders. Osage law may or may not someday require the PC and APC to run on a ticket. Until it does, I hope the benefits of candid cooperation are observed and emulated in the future.”

Pratt said: “I am honored that my Osage people have re-elected me to serve on Congress. It is such a blessing to represent and serve my people and I will continue to do my best for them. I had such a great time on Election Day. Great weather, great food, great fellowship and so much laughter. All the beautiful things we appreciate as Osage people. I am so grateful to my family and friends for their love and support, to everyone who voted for me from near and far, and the new friendships I have formed along the way. God bless you all and your homes. I am so proud to be Wah-Zha-Zhi.”

Goodfox thanked voters on Facebook stating: “I am so thankful to the Osage people for allowing me to serve you for a third term on the Osage Nation Congress. Thank you to my family for always being by my side. Thank you to all who voted for me, texted, called, posted encouraging words, and donated to my campaign. I will work hard for you.”

Lemon, along with the other candidates, greeted well-wishers at the Chambers building where the results were announced. Lemon said she was originally at her candidate camp washing dishes when the election officials started approaching the building. At that time, family members told Lemon to go to the building and she rushed over – with a dishrag still in her hand. Lemon said she was humbled by the results, thanked the voters and said she is ready to work.

In a Facebook statement, Potts said: “I am humbled by this experience and honored that the Osage people have elected me to serve on the Osage Nation Congress. Thank you to my family, friends, and my beautiful wife, Izzy Potts, and baby Elinor. I wouldn’t have been able to do this without their constant love and support. Thank you to the Osage People for entrusting me with this office and this awesome responsibility. I will serve you to the best of my ability and I am filled with optimism for a brighter future.”

On her Facebook page, Stabler said: “Thank you to everyone who supported me and stood with me on the campaign trail. I am so proud to serve as an Osage Nation Congresswoman.”

On his campaign Facebook page, Bighorse said: “Hawey. I just wanted to stop and say A-ho (thank you) to everyone who has supported me, stopped by my camp, and voted for me. I will do my best for my fellow Wah.Zha.Zhe people. Love, peace, and Wash.kah^”

All elected officials and retained judges will take their oaths of office on Inauguration Day, which will be held Saturday, July 14, with more information to come.