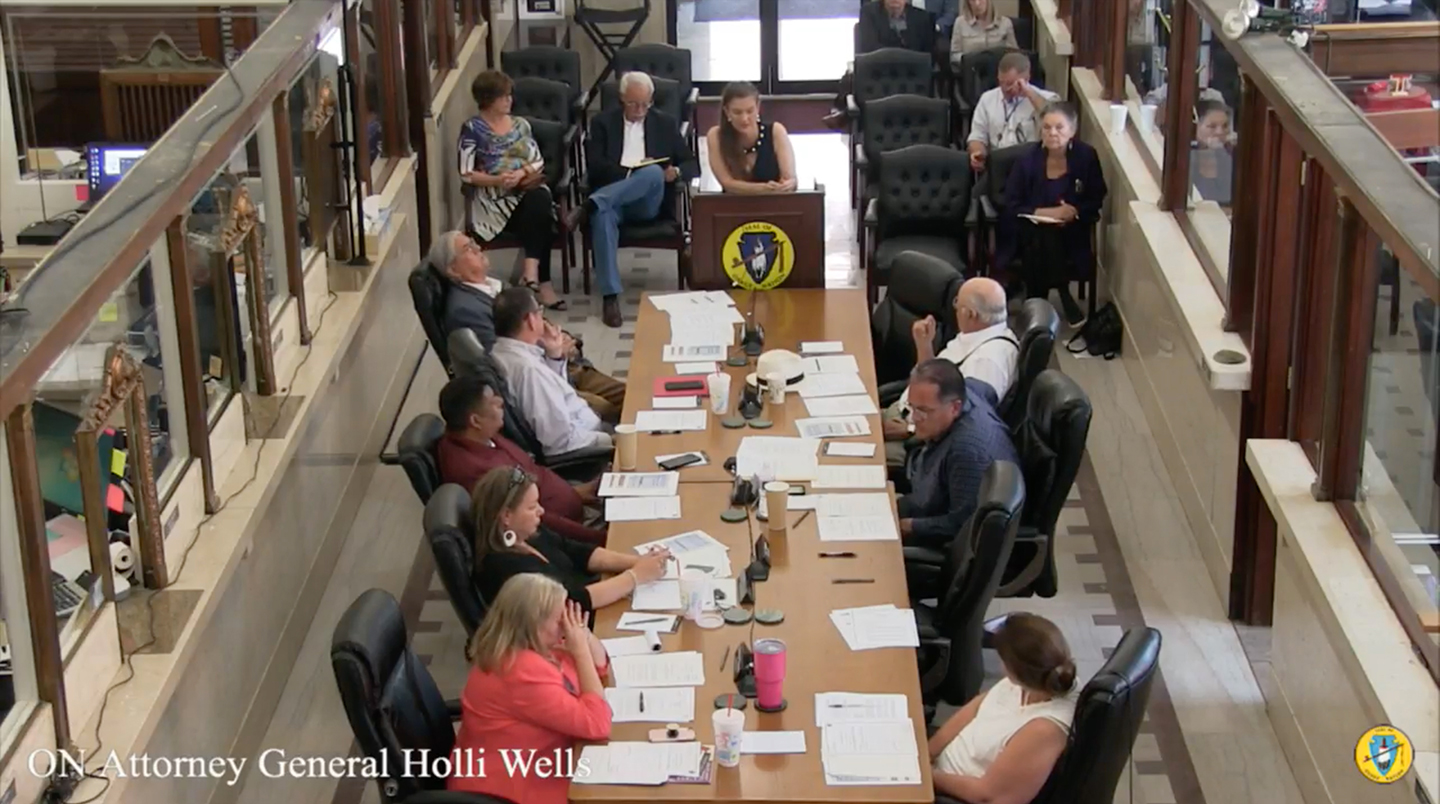 Photo Caption: Osage Nation Attorney General Holli Wells answers questions from the Fifth Osage Nation Congress as to the legal ramifications to the Nation if Tallgrass and Osage LLCs were to default on government contracts. Screenshot of Live Video

In what has proven to be one of the most difficult years for the Osage Nation’s business arm, the Osage Congress approved to appoint an agent to assist the ON Attorney General in assessing the financial status regarding the Osage and Tallgrass Economic Development LLCs.

Congresswoman Shannon Edwards filed a bill and a resolution addressing the companies during the 12th Special Session, held June 5. The bill, ONCA 18-30, called for an appropriation of $150,000 to pay for the agent. The resolution, ONCR 18-15, allowed for the appointment of the agent. There were hours long discussions during the session on whether additional experts were needed, whether the amount of money was too high, and whether the Nation’s leaders could find a remedy for the companies on its own.

The appropriation bill failed, and the resolution passed, prompting remarks by Edwards that the funding for the agent might not be available to Attorney General Holli Wells. Edwards, Assistant Principal Chief Raymond Red Corn, speaking on behalf of the Executive Branch, and Wells spoke in favor of the accounting and advisory firm of Baker Tilly.

Since that time Wells has reached out to Baker Tilly to begin negotiations.

“We’re in negotiations, they’re ongoing,” said Wells on a phone interview June 28. “Baker Tilly has been chosen after we’ve researched different entities, and we also had good recommendations from other parties for their work on this type of situation.”

Wells said the lack of funding for the agent is a valid concern and she couldn’t comment further until after she spoke with ON Treasurer Sam Alexander. She said the top priority for the agent is to do an independent evaluation of the financial status of Tallgrass LLC and their entities. She said once the agent is hired they will have 21 days to assess the companies and report back to the Nation.

Red Corn and Wells both supported the position of hiring a third-party agent to look into the financial condition of both companies. Congresswoman Alice Goodfox too supported appointing an agent but she felt the cost of $150,000 was high to pay someone to give answers to questions they already knew the answers to.

“I just feel like this is one of those times, and we’ve done this before in the past, where we pay someone on the outside to come in and tell us what we’re doing right and what we’re doing wrong and to oversee, or have a second, third or fourth set of eyes on something we’re charged with doing – whether that’s Congress, Executive or boards. That’s what we’re doing right now,” she said. “We’re going to pay someone $150,000 to come in and tell us, in my opinion, what we already know. So, while I am glad we’re not forking over money directly to Tallgrass or Osage LLC because I know they’re having problems and yes, I know it’s going through the attorney general’s office, I still ... I’m just not okay with this.

“I feel like this is something we as a Nation can figure out without having to spend an additional $150,000 of the Osage people’s money.”

Edwards said the Congress has known about the struggles of Tallgrass LLC and Osage LLC for about eight to 10 months. She said the company was in trouble, they could not produce audited financials, there are problems with their records, quarterly reports are not being turned in and there was a wrong accounting system being used at one time.

“I don’t think we do know what to do about it. Because if we knew what to do about it, we would not have been in a position where we wiped out our workforce, without closing the doors. So, you’re left without substantially all your workforce, wiped out an entire area of business,” she said. “We have two board members that came on board and then left because of the state of the affairs of the entity and yes, it’s going to cost some money to get some solutions. There hasn’t been a solution produced to my knowledge until we have this money. This is not that much money to get some real solid information from some real solid experts.”

Wells said the Nation is in a precarious position it’s never been in before. She said if the Nation should lose its government contracts it would damage the Nation’s reputation of doing business for years. She compared the situation of Tallgrass LLC and Osage LLC to “circling the drain.”

“One of the advantages of this money is not just another set of eyes looking at what we’ve already looked at, but these government contracts are vital. And you just can’t shut the doors when you have government contracts, it’s just not possible. We’ve never been in this situation before, and the way things wind down, if they wind down, we need to know how to do that. If they don’t wind down, then we need Baker Tilly working these folks to tell us how to,” she said. “Members of Congress, I can’t enforce to you enough that we can’t just shut the doors, we cannot do that. As the Nation that would cripple us from any economic development for years. Baker Tilly can come in and do what Finley and Cook isn’t hired to do and that’s where it makes a difference to me as the AG, is we have to do things right, we have to do things that are going to benefit our people, not things that are going to keep us from being able to make money five years from now. We’re in a situation we’ve never been in and this is a very important decision that we’re making on behalf of our people.”

ONCR 18-15 passed with only two “no” votes coming from Supernaw and Whitehorn.

In a phone interview on June 25, Tallgrass Board of Directors Chair Jim Parris said they are working with their contractors on a schedule to pay for everything they owe. He said the companies have not defaulted on their government contracts and that the board is currently working with the Nation on possible financial assistance, but he could not go into details.

“We’re still working and it’s just something that a lot of people are trying to help us with,” he said. “We’re hoping everything is going to work out to continue operations. We’ll see what happens.”