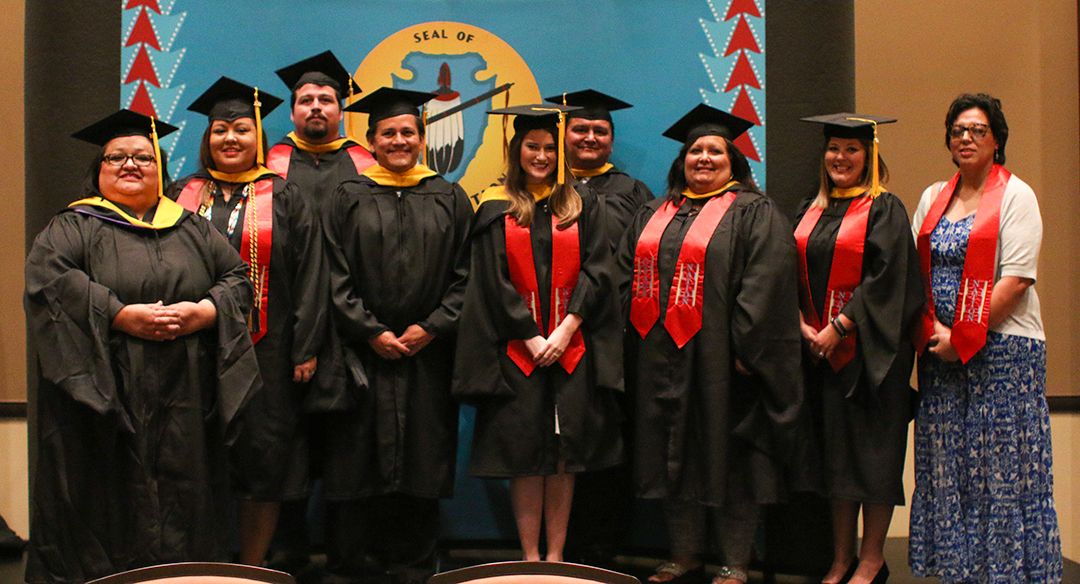 SKIATOOK, Okla. – Families and friends honored and celebrated the first class of the Osage Nation Educational Leadership Academy at their graduation today.

The graduates received their Master of Science in Education Leadership from Kansas State University, which is the first-ever partnership between a major university and a tribal nation to advance the education of its members who are reservation-based.

Graduating with their master’s degrees were Boyna Bear, Dana Daylight, Joni Hall, Lauren Long, Amanda McKinley, Cameron Pratt, Coley Streater, Manon Taylor and Mary Wildcat. All the graduates work for the Osage Nation and all work in some capacity for the Nation’s Education Department or other service-based departments that reach Osage youth.

Dr. Alex Red Corn, an Osage professor at KSU and the driving force behind the program said he was very proud of each one of the graduates, the sacrifice they made from their jobs and their families and looked forward to their upcoming achievements in education. He said the second class of the ONELA will begin this fall.

“The program is intended to train educational leaders on the reservation while they stayed in their positions at the Nation and allow us to build the capacity in Osage education,” Red Corn said.

He said the two-year master’s program pulled from mainstream educational concepts and helped the students learn in an Osage-specific context as it relates to working at the Osage Nation.

Among the graduates were two sisters, Mary Wildcat and Dana Daylight. Wildcat is the ON Education Department director and her older sister, Daylight, is a cultural curriculum specialist for the Nation’s Wahzhazhi Early Learning Academies. Both sisters look forward to improving the education experience for Osage youth. Amanda McKinley was recently hired as the second-grade teacher for the Osage Language Immersion School.

“We have such an opportunity to teach our Osage youth about our Nation, as well as other tribal nations,” McKinley said. “I look forward to bringing the education I received from this master’s program to the classroom for our Osage students. I’m very excited about that.”

Osage Nation WIC Director, Manon Taylor, was one of the students who spoke at the graduation. She said that being the oldest graduate in the class was proof that education is a lifelong pursuit and the relationships she formed with the other graduates is something she will continue to foster.

“I’ve learned so much ... and we’re a lot closer and we’ve worked on projects together for the Nation with collaborations, and hopefully we’re going to enrich all the children’s lives at the Nation,” she said.

Boyna Bear, who does not live in Osage County said the commute from Tulsa was easy, given the fact that he could listen to his readings in the car before class and after class, he took that time to reflect on what he had learned on the hour drive home.

“The motivation behind everyone in the cohort is better educational opportunities and culturally relevant opportunities for our students, for Osage students specifically,” Bear said. “It’s such a unique perspective and such an important one that we need to think about as Osage people, as Native American people ... the program is built on a care for our people. The students in the cohort, their cultural knowledge was across the spectrum, but everything felt safe ... you were safe to ask questions and it tapped into the people who knew a lot about our culture and we were able to tap into that in how to better serve our kids and how that comes to the forefront of our minds as we educate.”