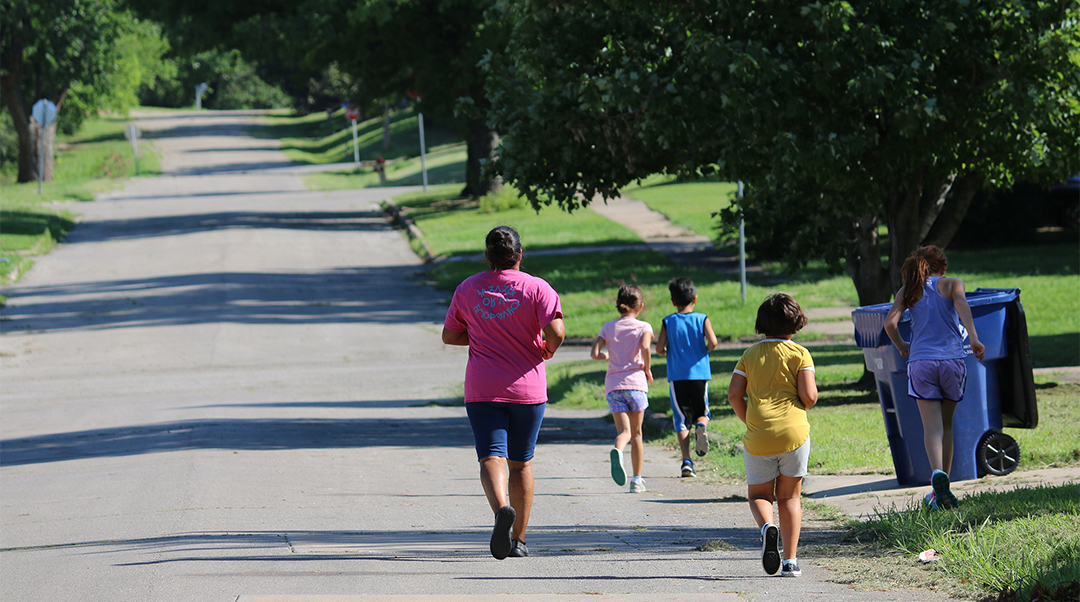 In the early morning hours at the Osage Language Immersion School, the first-grade students are warming up for their morning jog. The students, ages 6 to 7, talk excitedly about how fast they can run and who will win the race.

“It’s not a race,” said Wakonze Mary Jacobs, one of the teachers who helps the first grade at the school. Wakonze, pronounced Wah-Kon-Zay, translates to “Teacher” in Osage. “We must pace ourselves.”

The students, who will begin second grade in the fall, will be the members of the school’s first Cross Country team. They will be called the Osage Language Immersion School Eagles. Their uniforms will be turquoise, gold and black, with the school’s sports logo yet to be decided.

“I get emotional when I think about what we’re doing here, it almost makes me cry,” said First Grade Wakonze Paula Martinez. “Knowing this is a first, we’re starting something new. It’s fun watching them grow. These children are the first for our school to be running cross country. This is making history for our school and Nation.”

Cross Country is a popular sport among Native youth, especially on reservations in the Southwest and the northern plains. The students have been prepped for the sport by Martinez and Jacobs, who have been showing the students videos and articles on Jim Thorpe and Billy Mills. The students especially like the footage of Mills’ legendary win of the 1964 Tokyo Olympics in the 10,000 meters.

“The video of Billy Mills winning the Olympics got the kids excited. They really started wanting to exercise and run after that,” Martinez said. Their next field trip will be to Jim Thorpe’s home in Yale, Okla.

“We’re excited,” said Pehan RedCorn, who will be in second grade in the fall. She said running is good exercise.

The students also have plenty of role models to look up to in the classroom.

“We both ran cross country in college, so we have that in common,” Martinez said of her and Jacobs.

Martinez held the high school state record in the mile for more than three decades and ran track and cross country for Oklahoma State University. Jacobs ran cross country for Haskell Indian Nations University and runs with the students when they train.

“I’m excited to add another physical fitness component to the school. Mrs. Martinez has come into the Immersion School and really been a driving force in this area,” said David Webb, Headmaster for the school. “The Immersion School is guided by four pillars: Osage Lifeways and Nation Building; Family and Community; Academics; and Health. The cross country team is one example of the Immersion School drawing from the biological, environmental, psychological, physical and medical sciences to promote the overall health of our students.”

Martinez said she and her daughter, Mandy McKinley, and Jacobs, came up with the idea for having sports teams for the school. They originally wanted a basketball team for the school, but at the time it was too late in the season to organize. Martinez told the parents of their idea for a cross country team and the idea took off, she said. The parents came together and conducted a survey for a school mascot and school colors. They chose the Eagles for their mascot and their school colors are turquoise, gold and black.

The Immersion School parents are organizing a sports logo art contest for Osage Nation tribal members to enter. Parents will choose the winning sports logo that will be used for the school’s sports teams and will be on the student uniforms, t-shirts and other merchandise. The rules and information for the competition is currently being finalized and will be released in coming weeks.

Martinez said the cross country season starts in September and she already has the students booked for five competitions. The first will be a competition in Bartlesville, Cleveland, then Tonkawa and she has scheduled two competitions against her former school, Woodland. She taught and coached cross country, Track and Field, for 22 years.

“I talked to my old school, Woodland, and to the coaches there and we’re going to go to their school and run and then they’re going to come here and run,” she said. “The kids are excited.”