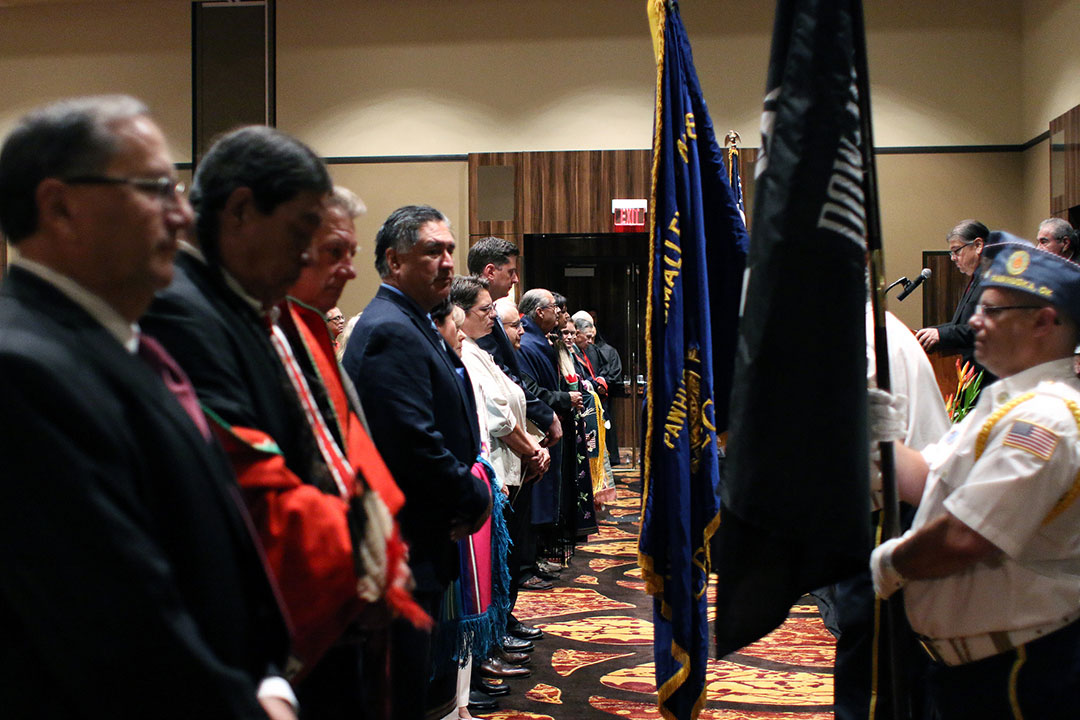 Photo Caption: Osage elected officials sit on the front row and wait to take their oaths of office at the 2018 Osage Nation Inauguration on July 14 at the Osage Casino in Ponca City. SHANNON SHAW DUTY/Osage News

PONCA CITY, Okla. – A new chapter in Osage Nation government history started here on July 14 with Inauguration Day for the elected government officials who took their oaths of office in front of their families, friends, fellow community members and fellow Osages.

More than 100 people attended the Nation’s inauguration ceremony in the Osage Casino hotel’s Elm Room, which was also the venue for the 2014 and 2016 inaugurations. The event opened with members from the Harold Bigheart Smalley American Legion Post No. 198 posting the flag colors, and opening songs sung by an Osage drum group.

Vann Bighorse, the ON Language Department director, emceed the event and introduced students from the Osage Language Immersion School who delivered a “very special” invocation – The Lord’s Prayer in the Osage language. Bighorse also noted the immersion school students competed at the Oklahoma Native American Youth Language Fair earlier this year and “placed first in their category” against other tribes with fluent language speakers.

The audience reacted with a standing ovation, cheers, and women’s lulus after the students’ performance. “These are going to be our next fluent speakers, this is what we call revitalization,” Bighorse said after introducing the students.

Osage citizen and Oklahoma City Mayor David Holt served as the inauguration guest speaker. Holt took mayoral office after winning the city’s election in February 2018 “with 78.5 percent of the vote, it was the largest vote percentage achieved by a non-incumbent candidate for mayor since 1947 and it made Holt (39) the youngest mayor of Oklahoma City since 1923,” Bighorse said in introducing Holt.

In his speech time, Holt read passages from The Osages: Children of the Middle Waters by Osage author John Joseph Mathews. “… Long before the Europeans found them, they had named the animals, the fishes, the trees, the plants and the birds and had named themselves Children of the Middle Waters. They also knew how they got there and why they were there and they also had fumbled toward an understanding of the Wakon and that very comforting interpretation under which they dwell.”

Holt introduced himself as a member of the Fuller family, which appears on the 1906 roll and noted his, like other Osage families, have their respective stories of leaving the reservation, “so now we walk many paths to find ourselves here today and yet, we all are here together still an Osage Nation.”

“We have pulled together and we have survived” adversity for centuries, Holt said in recounting struggles past Osages endured. “We’re from coast to coast, we’re around the world, we’ve made an impact in sports, in culture, in government, in business, and in the military – In my city where I serve as mayor, our largest employer is Tinker Air Force Base, a major hub of our nation’s defense named for an Osage (Army Maj. Gen. Clarence Tinker).”

Holt acknowledged the Osage officials from all three ON government branches and the Osage Minerals Council present for taking their oaths of office. “This Nation is now yours to lead … We’ve chosen you to hold this sacred trust, I want you to know we believe in you, we have chosen you, we believe you are worthy custodians of our Nation’s long story, you will go knowing the spirit of our people flows through you, of those alive today and our ancestors.”

The inauguration event included an honoring of gifts for those leaving office, including outgoing Congress members William “Kugee” Supernaw and James Norris who were present.

Drent honored Stepson, who did not seek another retention vote as Trial Court Chief Judge and his service ended that day. Stepson served on the bench since 2006. Drent administered the oaths for officials elected to the three government branches including Principal Chief Geoffrey Standing Bear and Assistant Principal Chief Raymond Red Corn, who both won second four-year terms.

The day’s event also included a piano performance by Andrew Cote, a Skiatook High School graduate, who composed his own music and has plans to enter the U.S. Marine service in December, Bighorse said.

The 2018 Osage Nation inauguration is available for viewing online at: https://www.youtube.com/watch?v=jaw9L4qCing