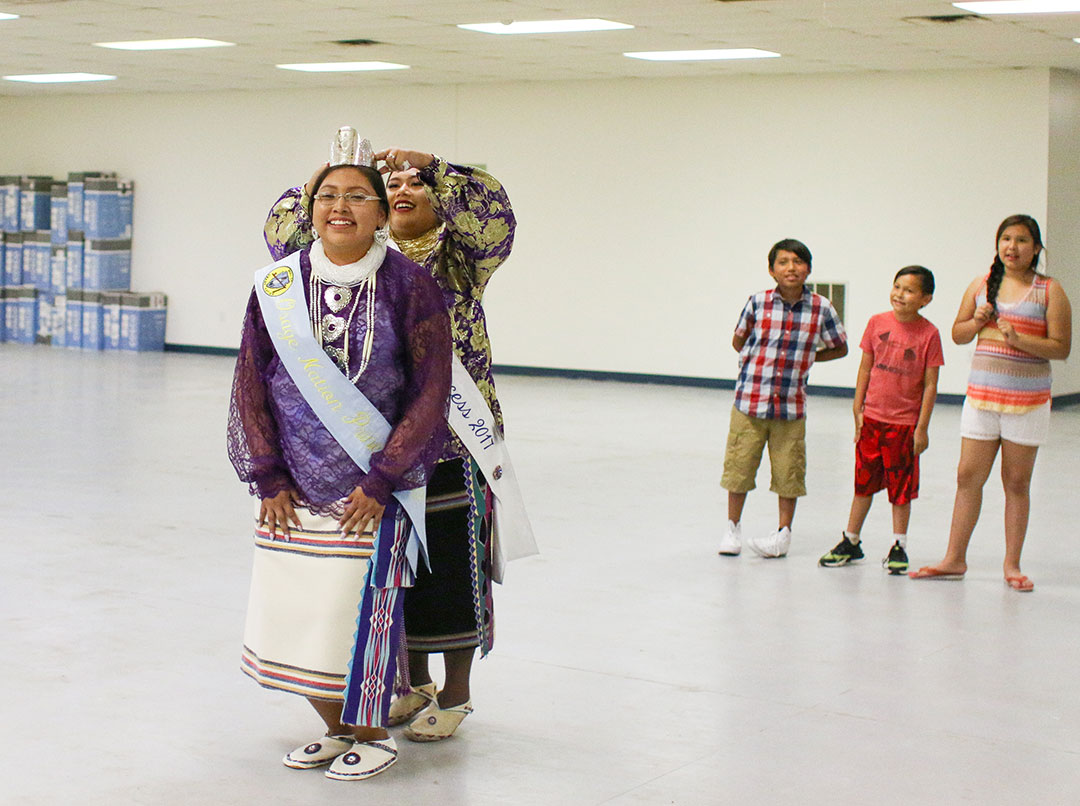 Joining a long line of Osage princesses, Alaina Maker was both humbled and grateful when she was chosen to be the 2018 Osage Nation Princess.

“Before selecting the new Osage princess I looked for someone who was respectful, someone who knew their language and loved their people. Lanie had all those qualities,” said Chalene “Chay” Toehay-Tartsah, Osage Nation Princess Director. “She was very excited when I asked her. I know that she will do an outstanding job as the new ambassador for the nation. Lanie shows me that she has leadership skills. I know that she will inspire other young women.”

“After I asked her to be the new princess her response, with a big sigh, was ‘I've always wanted this. Thank you,’ and then she gave me a hug.”

Maker was crowned as the new Osage Nation Princess on June 5 at the Osage Nation Civic Center, surrounded by friends, family and past Osage princesses. Toehay-Tartsah and Maker's family hosted the dinner which served chicken and dumplings, corn soup, frybread, green beans, steam fry, grape dumplings and salad, which was made by Tonya, Ema, and Michelle RedCorn. A cake was served to the attendees by the youth in attendance and past Osage Princess Jerri Jean Branstetter had the honor of cutting the cake. Assistant Principal Chief Raymond Red Corn placed Maker's princess banner on her for the first time and Principal Chief Geoffrey Standing Bear made remarks and said the prayer for the meal. Outgoing Osage Nation Princess Jasmine Phetsacksith crowned Maker.

“I just want to express my gratitude; I ran for this twice, so, now to be here in the moment and I’m Osage Princess, it’s just so overwhelming,” she said. “I would like to thank you all for your love and support and everyone that’s expressed kind words to me ... Thank You, Chay, for this opportunity and thank you, everybody, for coming here. You could have been anywhere tonight, and you wanted to be here with me, thank you so much ... Way-We-Nah.”

She graduated from Pawhuska High School in 2012. In 2013 she attended the University of Oklahoma before returning home after her father passed away to step in as a provider for her family. She currently works in the Osage Language Department, as both a teacher and curriculum developer. She has plans to return to school and obtain her degree, but she is very grateful for the time she has spent at home learning more of the Osage language and her Osage traditions.

She said she grew up in a traditional Osage family and from a very young age her father and mother instilled Osage values for her life.

The first Osage Tribal Princess was Margaret Luttrell Gray, who served in 1941. Since 1941, an Osage Princess has represented the Osage Nation every year at the week-long American Indian Exposition, held every year in August in Anadarko, Okla. The Osage Nation Princess will join other tribal princesses from more than 10 different tribal nations at the Exposition. They participate in banquets, fashion shows, they are featured in parades, pageants, and are asked to give speeches about their tribal nations at various events.

Once the princess has served for a year, she becomes a member of the Osage Tribal Princess Sorority for life. She receives a shawl with her name and year of reign. The OTPS currently has more than 15 active members and they hold an annual honor dance.

“Many of our young Native women look up to their tribal princess,” Toehay-Tartsah said. “It’s a big honor.”