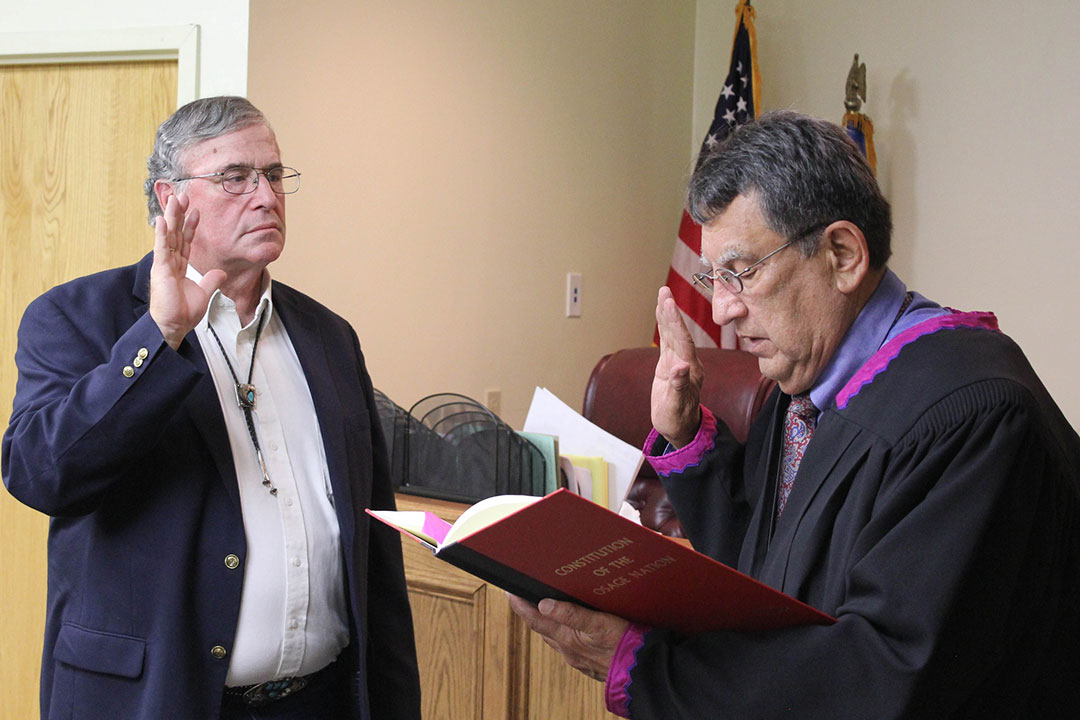 A former Osage Minerals Councilman is now serving on the Osage Nation’s Bluestem Ranch LLC Board after being appointed by Principal Chief Geoffrey Standing Bear.

Galen Crum took oath as a Bluestem Ranch Board member on July 5 at the ON Tribal Courthouse with Trial Court Chief Judge Marvin Stepson presiding. Crum will serve interim board duties and will be subject to confirmation consideration by the incoming Sixth ON Congress, which meets for its first regular 24-day session in September.

Crum served two four-year terms on the OMC (2010-2018) with his second term ending when the Fourth OMC took their oaths July 2.

While serving on the OMC, Crum also sat on the Osage Trust Team with other OMC members and Congressional and Executive Branch officials. The Osage Trust Team participated in discussions regarding the Nation’s trust case against the United States, which led to the 2011 settlement in the case.

Like with other board appointees to be considered, Crum’s appointment will be referred to an ON Congressional committee for initial review and consideration when the 2018 Tzi-Zho Session begins in September.

According to the Congressional rules, “Once reported (by the committee that the appointee is qualified by education/ experience), any member of Congress may move during the ‘Motions’ portion of a Session for a nominee interview to be placed on an agenda, or alternatively may move for confirmation consideration of the nominee to be placed on an agenda. The motion is subject to amendment and requires an affirmative majority vote of the members present to pass. Should either of the motions fail, the motion may be reasserted any day until the day before the last regular day of Session.”

The Congressional rules also state: “As provided in the Constitution, the Congress may decline to consider a nominee or a re-nomination by failing to move the nomination forward for consideration by the day before the last day of the regular session prior to which the nomination was made. If this occurs, the nomination is deemed rejected and the provisions of the constitution and laws regarding failure of the Congress to confirm an appointee apply.”