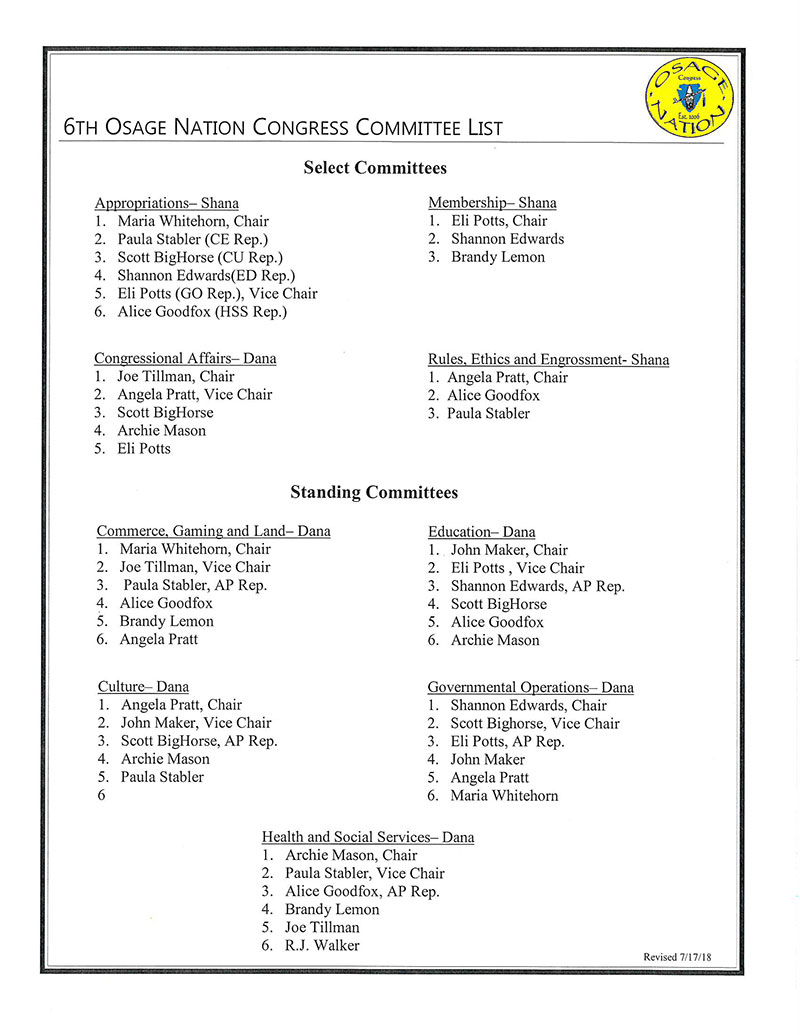 The Sixth Osage Nation Congress set its committee structure as part of its first orders of business on July 14 during a one-day special session.

The 12 Congressional members met in caucus for the members to sign up for the various Congressional select and standing committees, which typically meet to initially consider legislative items and budgets. The Congress voted unanimously to set the committee list, which will stand until the 2019 Hun-Kah Session ends.

The select and standing committees also briefly met that day to select the respective committee officers and those newly formed select committees are:

- The Appropriations Committee is comprised of one member elected by each of the Congressional standing committees, per Congressional rules. This committee’s duties include monitoring all appropriation legislation filed in Congress, review financial reports by the ON Treasurer and business enterprises and issue reports regularly on the fiscal status of the Nation to the Congress. Appropriation Committee members are Maria Whitehorn (chair), Eli Potts (vice chair), Paula Stabler, BigHorse, Shannon Edwards and Alice Goodfox.

- The Rules, Ethics and Engrossment Committee duties include researching and proposing amendments and additions to the Congressional rules, engrossing all bills referred by the Speaker before a final vote of the Congress and to ensure legislative compliance with Article X of the ON Constitution (Code of Ethics) and any ethics rules of the Congress and Osage law. Rules, Ethics and Engrossment Committee members are Pratt (chair), Goodfox and Stabler.

Per Congressional rules, Congressional standing committees’ subject matter jurisdiction extends to all matters reasonably comprehended in the name of the committee. A committee’s particular jurisdiction extends to any bill, resolution, confirmation (of individuals appointed for ON boards or officer positions) or other measure referred to it by the Congress including budgets. The new standing committees are: