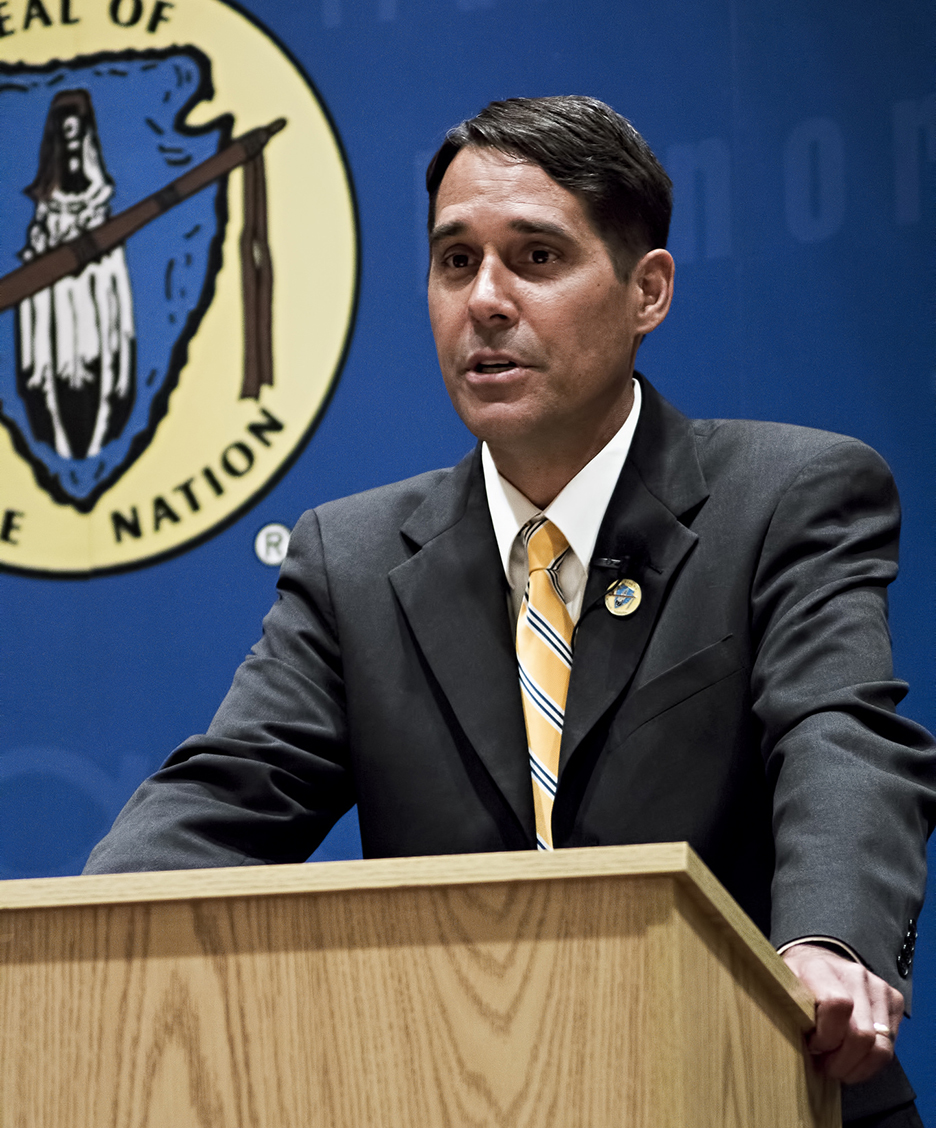 RJ Walker elected as ON Congressional Speaker by colleagues

RJ Walker is now Congressional Speaker after his fellow Congress members elected him to the position on July 14.

Walker (Pawhuska District) received majority votes in the officer election held during a single-day special session just hours after the newly elected Sixth ON Congress members took their oaths of office during the inauguration ceremony that morning.

First elected by Osage voters in 2012, Walker is in the middle of his second Congressional term after winning re-election in 2016. This is his first time serving as Speaker. He has previously served as chair of Congressional committees, including Governmental Operations and Health and Social Services. Before serving on Congress, Walker worked as the Nation’s Roads Department director since 2002.

Walker has served on other community boards, including as chairman of the Osage County Industrial Authority Board. During his board service, Walker said a joint collaboration between the Nation, the City of Pawhuska and Tri-County Technology Center resulted in building the Pawhuska Business Development Center, which is used today for higher education classes, training and beginning incubator business space.

Walker also served on a committee for the Nation’s Master Campus Plan that helped develop the plan for new ON government buildings, which has resulted in the two Phase I structures to house several government departments. Walker lives in Pawhuska with his wife Kristina Walker and their five children.

Also that day, the Congress members elected Joe Tillman to serve as Second Speaker. This is the first time Tillman has served as Second Speaker and he has also held committee chair duties including Rules and Ethics and Engrossment.

“This is my sixth year on the Congress, I’ve chaired committees I think every year I’ve been on the Congress. I feel that I would be fair and impartial, I feel I’ve proven to be a good chair to lead a productive meeting, keep things in order. I’m open to constructive criticism if you have it, I don’t get my feelings hurt very easily. I would work well with the Executive Branch – wouldn’t be a tool of the Executive Branch – but I would work collaboratively with the Executive Branch and I feel like it’s time for me to step up and take bigger leadership within Congress. It’s not a position I’ve sought after, lobbied for, but I do feel it’s my time and I would appreciate your vote.”

“I’ve wanted to be in the Speaker role for a one-year term because I believe everyone on the Congress ought to be a Speaker,” Edwards said. “The Speaker’s role is about process, about getting us through the day, about getting us through our legislation like we’re supposed to take care of, particularly in this upcoming session where we have new members ... I’ve been the chair of appropriations (committee), I’ve been the chair of rules (and ethics and engrossment committee) … I’d like to give you all a little bit of the experience I’ve had being a judge and being on this Congress for 12 years and knowing how to make process work.”

“I appreciate it, it’s an honor to be up here and I admire all of you who have served (as Speaker in prior years) – Congresswoman Whitehorn, Congressman Mason, Congresswoman Pratt - I hope to follow in your footsteps and utilize what I’ve seen you guys do,” Walker said after moving from his Congressman seat to the Speaker’s seat in the Capitol Building. He then took over the presiding duties, which included the election for Second Speaker.

For Second Speaker nominees, Goodfox nominated Pratt, Maker nominated Mason and Edwards nominated Tillman. Pratt withdrew herself from the nominees to be considered without any objections.

Mason, also a three-term Congressman since 2006 and the first elected Speaker, also recalled seeing the prior Congressional members help develop the Legislative Branch and its offices and said he is aware of the challenges ahead and it’s a “busy, busy position.” Tillman said his first year on the Congress was a learning experience and “huge learning curve” and he’s seen the work and duties performed by past Second Speakers and also felt it’s time to assume more duties and he is honored by the nomination.

The Second Speaker vote resulted in a 6-6 tie twice, prompting three voting rounds. “By rule, the way I remember, we vote again,” Walker said in calling for two more rounds.

Tillman won the third round of voting with seven votes from Lemon, Edwards, BigHorse, Whitehorn, Tillman (himself), Stabler and Potts. Tillman (Grayhorse District) is a former ON division leader for the education and culture departments as part of the former Executive Branch organization. After the votes, Mason addressed the two new Congressional officers: “I wish to pledge my support to Congressman Tillman and to you, sir.”