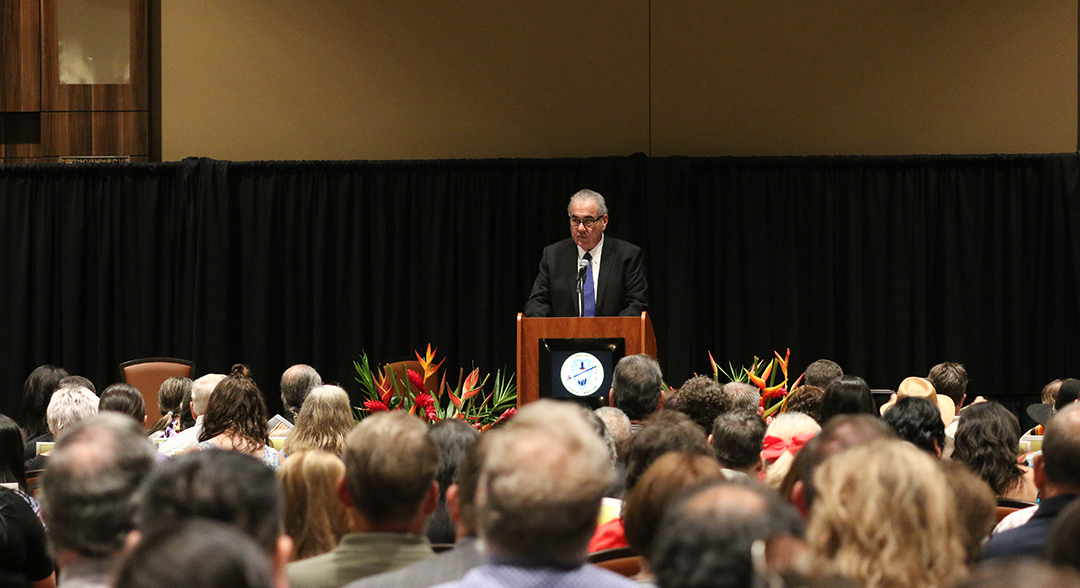 Standing Bear makes address at Inauguration, adding ‘We can do more’

PONCA CITY, Okla. – In his second inauguration speech to the Osage Nation and community members, re-elected Principal Chief Geoffrey Standing Bear lauded the Nation’s government history and recognized several entities that supported the accomplishments made during his administration’s first term in office.

Standing Bear and other elected officials took their oaths of office on July 14 at the Ponca City Osage Casino where more than 100 people attended the inauguration ceremony. Other Osages taking office included Assistant Principal Chief Raymond Red Corn and the six members of the ON Congress who were all elected or re-elected in the June 4 general election.

“Since 1906, we have grown from 2,229 people to 21,332 as of this June,” Standing Bear told the attendees. “Our people reside throughout the United States and abroad. As Principal Chief of the Osage Nation, I am proud to have the honor and privilege to have been re-elected to lead this great Nation. All the accomplishments of our administration could not have been possible without the Assistant Chief, our staff and all the employees who’ve done a remarkable job in taking the vision we have presented and bringing it to life.”

In his prepared remarks, Standing Bear said the ON Congress support for his administration’s projects “was instrumental and will remain so as we continue forward” and he also thanked gaming officials and employees who work for the Nation’s seven-Osage Casino gaming enterprise, which brings in the majority of the Nation’s tribal funding used to support the three-branch government operations.

“Over the past four years, the Executive Branch and the Osage Congress, working together, have achieved many great accomplishments for the Wah-Zha-Zhi people,” Standing Bear said. “Each year, we have ensured enough funding is committed to our higher education scholarships, our health benefit card, our Medicare supplement programs and our burial assistance … After this funding is committed, the Congress and Chief must find a way to answer all the other needs of our people within the limits of available funding, this is a difficult process and continues throughout the year.”

“The results are what we see here today,” Standing Bear said. “Funding has been provided for Social Services, health programs, law enforcement, courts and every other aspect of our government. These efforts resulted in quality pre-schools and the development of a new education curriculum based on science, technology, engineering, art, and math (STEAM). Throughout our educational efforts, our Osage language has been our central focus, our language program has developed a revolutionary use of modern technology. This technology is showcased in a new computer application, which we can use on computers or mobile devices.”

The inauguration ceremony included an invocation delivered by students in the Osage Language Immersion School – The Lord’s Prayer in Osage. This year, the immersion school is hitting its two-year anniversary and will begin offering a second-grade class starting Aug. 13. “It is overwhelming to hear our language spoken by children in prayer and conversation,” Standing Bear said.

Standing Bear recognized the work of all past traditional leaders, elected and appointed Osage leaders and the various Osage families “who have brought us this far and helped us to make this Osage Nation great. We continue to respect our prior history of government, he said. “This history includes our ancient clan system, our 1881 Constitution, our 1906 Act former government and the work of our Osage Government Reform Commission … and for 12 years, we have governed ourselves by (the 2006) Constitution consisting of three branches of government – the legislative, the judicial and the executive – and each carries out their functions.”

Standing Bear noted the 2006 Osage Constitution is unique and stands away from other states and Nations’ constitutions, including the U.S. Constitution. “Our constitution recognizes the blessings of Wah-Kon-Tah and describes our territory as established by treaties with the United States of America. This territory includes, but not limited to, air, water, surface lands, subsurface lands, our Minerals Estate and all of our natural resources.”

Standing Bear acknowledged accomplishments made during his first term with the support of other government officials and the ON Congress. “Working together, we have been very successful in building our land base, establishing new wellness centers, a new shelter for victims of domestic violence, building new traditional dance arbors.” One event Standing Bear is proud of is the collaborative effort with the Congress, Red Corn, the Gaming Enterprise Board and himself to successfully purchase the 43,000-acre Bluestem Ranch in 2016.

In moving forward, Standing Bear said: “We can do more – Osage veterans, elders and our healthcare system are areas that need more work. We have talented Osages working on these projects. We are presently in discussions on how to preserve the rights of water within the state of Oklahoma … We’ve also opened up community relationships to re-establish territory in our ancient homelands in Missouri. We also want to negotiate a new gaming compact with the state of Oklahoma. These are important events in the next few years.”

In closing, Standing Bear said: “We will continue to grow in numbers and in learning the best way to help each other … We will keep our Wah-Zha-Zhi language everywhere. Teaching young and old is saving our language in a critical moment. Without any effort, our language will be lost forever. I intend to make sure this does not happen. This is my third form of government of the Osage in my life (the 1906 Act form, the short-lived National Council in the 1990s and now the 2006 Constitutional government). I’ve observed many debates in each form of government – some very intense – but what we remember is what comes out of our government, which is good for us and the Osages yet to come. Many of us were fortunate to hear the words of our elders passing on the ancient teachings. What I learned is that forms of government are important, but what really matters are the beliefs and respect for one another and oneself. I can still hear them saying to us ‘be good to one another.’ This teaching applies to any of our governments no matter what form it takes.”