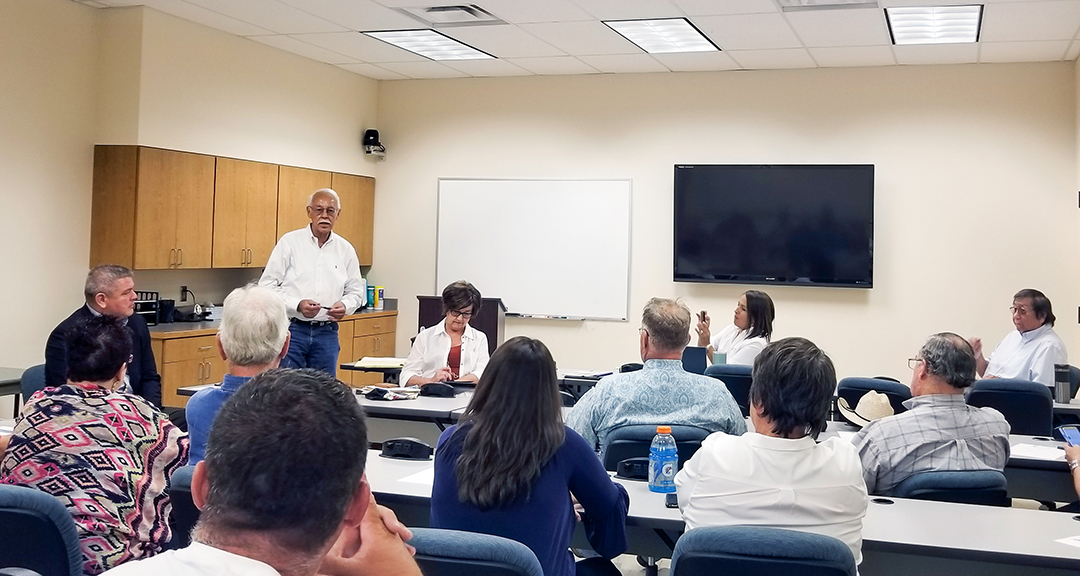 In a first of its kind meeting, members from the Osage Limited Liability Company boards met on July 25 in Pawhuska for a summit to introduce their business entities and current status.

The Osage Nation Environmental Solutions (ONES) LLC board hosted the summit in a special meeting at the Pawhuska Business Development Center with board members and other government officials and community members present.

Board Chairman Eddy Red Eagle Jr. moderated the summit meeting and said its purpose is to get “clarity of where we stand today… and to give everyone an assessment of how they see themselves going into this next time period.”

Tallgrass Board Chairman Jim Parris introduced the board and said he recently met with David Conrad, the chief executive officer of ONES, to see if the entities could have a joint request for a special session of the Sixth ON Congress in August to discuss requests for appropriations to fund their upcoming respective business endeavors and operations. Parris said the joint request is being made at the suggestion of Congresswoman Maria Whitehorn (currently chairwoman of the Congressional Appropriations and Commerce, Gaming and Land committees) and Principal Chief Geoffrey Standing Bear versus individual requests.

Parris said Osage LLC and Tallgrass are joined, with Osage LLC having the companies generating the revenues and operating expenses and Tallgrass pays the overhead expenses. He said Tallgrass is nearing the end of some construction and technology work contracts at Fort Leonard Wood, Mo., and Tinker Air Force Base. Due to underbidding on past projects conducted by former LLC management, Parris said Tallgrass is now looking at asking for more funding to continue its operations.

Parris said one possible plan is to ask Congress for a $600,000 appropriation that would be put into a bank certificate of deposit “and the bank would give us short-term cash of $600,000 and we would apply for a long-term guaranteed (Bureau of Indian Affairs) loan in Washington, D.C., that would be approved by them for $2 (million) to $3 million … That’s one way to do it, it doesn’t have to be, other options have been discussed with the Treasurer’s office.”

In its final special session held June 5, the Fifth ON Congress approved of appointing a third-party agent – accounting firm Baker Tilly – to assess the financial status of Tallgrass LLC and its entities. Parris told the summit he hoped to have “a better feel” of the Tallgrass LLC status when the report is issued possibly in early August and to revisit options with the two Congressional committees and Standing Bear’s office.

Board Chairman Jim Perrier said the ranch board started in 2016 when the 43,000-acre ranch sale was finalized and noted the ranch operations started from scratch with no tools or equipment, “all we had was grass and we have purchased roughly about $270,000 worth of equipment. We bought 1,500 head of cows worth probably around $3 million, we’re still buying cows.”

On operation funding, Perrier said: “Right now, we have money to operate if we don’t get any more, we have it set aside for that and we’re just trying to build assets and our goal at the end is try to get the whole ranch stocked with tribal cows, right now we’re just about half-way there … and so far, we feel very fortunate of what we’ve done. Our No. 1 deal? Make money, if we don’t make money, we don’t exist. It’s just like all our board members – we all come from a ranching family and if we don’t make money, we don’t get to eat that food on the table that evening.”

Conrad said ONES changed its name from the former Osage Nation Energy Services LLC to the current Environmental Solutions – to reflect its ongoing business focuses including environmental analysis and assessments, technical studies and infrastructural permitting for anything that has a federal permit or National Environmental Policy Act (NEPA) clearance.

“Everything requiring a NEPA analysis, we think there’s a large market to provide that analysis and we’ve seen it even here on the Osage Nation with the permits to drill,” Conrad said, adding ONES has recently met with other entities including the Osage Minerals Council, the BIA Superintendent’s office and the Nation’s Department of Natural Resources and Historic Preservation Office “in looking at ways we can help accelerate the time it takes for an environmental assessment to occur before the drilling permit releases can be approved. We’re looking to help streamline and shorten that as we can provide services to operators.”

“We’re in 100 percent start-up and business development phase right now, so we’re pursuing the work from federal contracts, from private industries,” Conrad said. “In particular, we have (an outside) sand and gravel operation that has invited us to submit a proposal. They need to build a conveyor belt and a loading dock (in Washington state) and they’ve asked us to do the federal environmental permitting on that project and we’re also looking at an Army Corps of Engineers project out of Albuquerque (N.M.).”

Conrad said ONES is also going after its 8(a) certification, “we’re competing currently as a small business and we’re also looking at the private side,” adding ONES can also assist on any Osage Nation projects that would require those federal permits including roads, housing, and land-into-trust applications. As for funding, Conrad said ONES operations funding is low and would be tapering off possibly in August.

“We’re looking for a ($400,000 to $500,000) appropriation that at least gets us through September and then we hope to continue to work with everybody on another appropriation strategy, enough to get our proposal development team up and going after the proposals. We’ve gone as far as we can with identifying opportunities and going after them, but we need further funding to do the business development.”

Red Eagle said plans would go forward in requesting a special session of the newly-seated Sixth ON Congress ahead of the 2018 Tzi-Zho Session, which starts Sept. 4. The regular fall session lasts up to 24 days with a majority of the session used to consider and approve the 2019 fiscal year budgets for the Nation’s government entities.