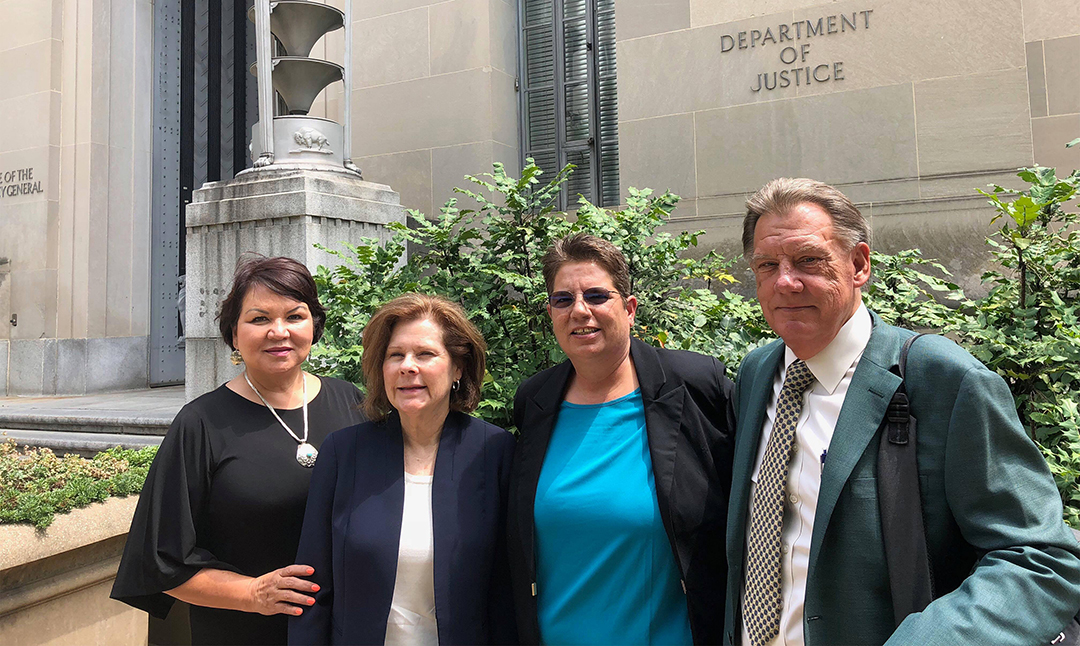 OMC members travel to Washington to advocate for shareholder rights

Less than a month after being sworn into office, four newly elected Osage Minerals Council members traveled to Washington, D.C., to meet with federal officials about the status of the mineral estate.

Council members Marsha Harlan, Susan Forman, Paul Revard, Margo Gray, and their legal counsel met with the Solicitor General about the Enel Wind case and whether the United States Supreme Court should consider it.

“This meeting was an opportunity for our legal representatives from Fredericks, Peebles, and Morgan to explain to the Solicitor and other government representatives why the 10th Circuit’s ruling should stand,” Harlan said in a prepared release. “Our attorney, Jeffrey Rasmussen, fielded questions from the Solicitor General’s office as well as the Department of the Interior and various other federal agencies”

Representatives from Osage Wind, LLC, also met with the same federal officials, Harlan said. In May of this year, the Supreme Court invited the Solicitor General’s Office to file a brief in the case expressing the United States’ views.

In addition to the meeting regarding the ongoing litigation, the four council members decided to use their time in Washington to meet with officials from the Office of the Secretary, Department of Interior and the Bureau of Indian Affairs, Harlan said.

“We were given the opportunity to meet with Vincent DeVito, Counselor to the Secretary for Energy Policy,” said Councilwoman Forman in a prepared release. “We were able to explain the four-year decline in oil and gas production on the Osage and what we believe to be over-zealous regulatory controls.”

According to Harlan, the Office of Energy Policy staff were very receptive to the council members and expressed a willingness to assist by ensuring the administration’s policy of streamlining regulations for the improvement of natural resource development and they would be immediately conveyed to the Osage Agency.

Also, while in Washington, the council members met with the acting director of the Bureau of Indian Affairs, Darryl LaCounte, and staff to discuss similar issues as well as the need for modification of the current Code of Federal Regulations as it pertains to the Osage Minerals Estate, according to the release.

“We were fortunate to be able to get an appointment with the Bureau of Indian Affairs and we wasted no time advocating for shareholders,” said Councilman Revard in the release. “Mr. LaCounte is familiar with the Osage, and his office has agreed to help us address all these restrictive policies that have hindered us during the last four years so that we can get production up and running again.”

According to Councilwoman Gray, the Fourth Osage Minerals Council has made it a priority to get production up and to move toward development of the Osage Mineral Estate. “We are and will continue, fighting for our shareholders’ rights. We can no longer sit idle and hope for change. We have to be proactive and make our voices heard.”