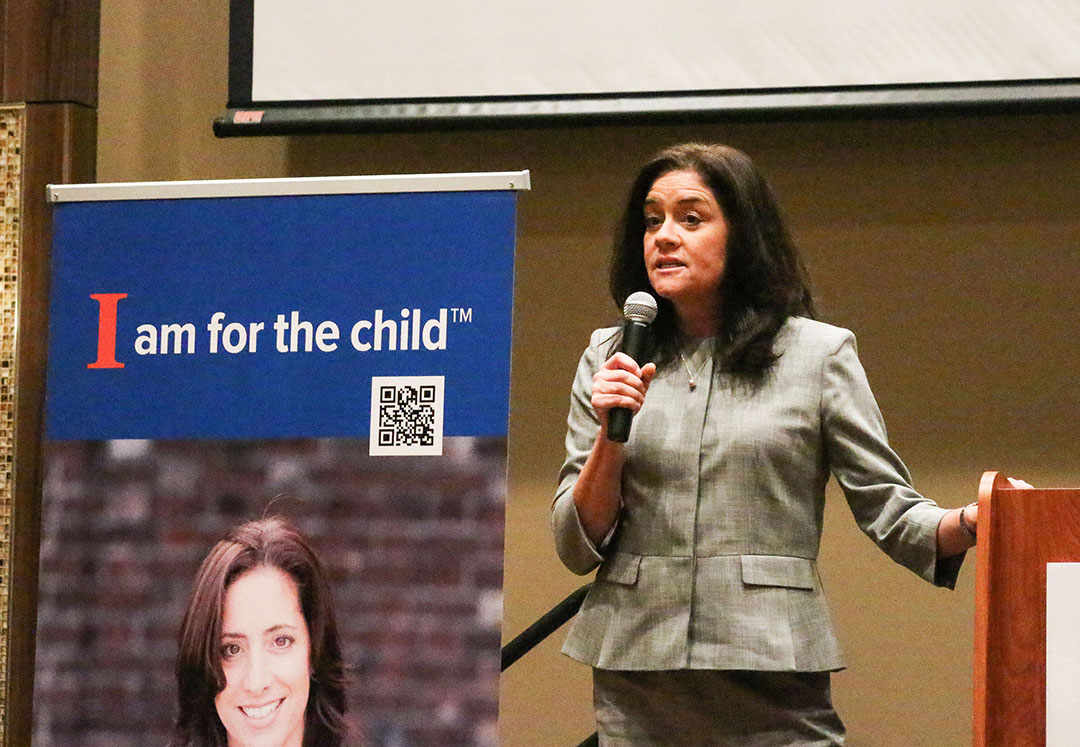 Photo caption: Lou Anna Red Corn, a founding board member of the Child Advocacy Center of the Bluegrass and Fayette Commonwealth’s Attorney in Kentucky, was the keynote speaker on Aug. 4 at the 2nd Annual Osage Women's Conference held at the Osage Casino in Skiatook. SHANNON SHAW DUTY/Osage News

Lou Anna Red Corn discussed the effects abuse can have on a child and how it impacts their lives into adulthood. She said many studies have found that a way to move a child from trauma to recovery is through culture, community and their cultural identity.

She said that every Osage woman in the room had a gift to give and it was the gift of their cultural knowledge to a young child to better their lives. She asked to see a show of hands of the women in the room that would think about or begin to inquire on how to become a Court Appointed Special Advocate for Native children in their community. Almost all of the women in the room raised their hands.

“The things that many of you in this room know, the things that you know by virtue of your family, your parents, your grandparents, people that you’ve been around your whole life, you can use that knowledge to actually impact successful outcomes for a child that’s been abused,” she said. “Not just sexually abused but neglected or physically abused.

“You have a gift and you need to share it because there’s a lot of children out there that need that gift.”

Red Corn, Osage, is the Fayette Commonwealth’s Attorney, the first woman to hold the position in Kentucky. She helped create the Fayette County Multi-Disciplinary team on Child Sexual Abuse and she is a founding board member of the Child Advocacy Center of the Bluegrass. She was the keynote speaker on the first day of the 2nd Annual Osage Women’s Conference on Aug. 4, held at the Osage Casino in Skiatook.

The conference is to raise awareness and funds for the Pawnee/Osage Court Appointed Special Advocates program and to bring Osage women together, said Osage Congresswoman Paula Stabler, one of the event’s main organizers.

Started in 2009, the Pawnee/Osage CASA program is a nonprofit with volunteers serving at-risk children in county court and tribal court cases in both Pawnee and Osage counties. CASA volunteers are assigned to abused and neglected Native American children in the court system and monitor their living conditions, school activity, cultural activities, and general well-being and report directly to the judge handling the child’s case. Helen Norris has the been the director since 2009. Norris announced there will be a CASA Birdhouse Auction Fundraiser in September at the Immaculate Conception Catholic Church. A date is being finalized.

On the agenda for the two-day conference was an Osage Wedding Coat Project from Dan Swan and Anita Fields; an explanation of Osage family relations by Pauline Alred and Julia Lookout; a presentation on women’s roles on Sunday’s at In-Lon-Schka by Stabler; a presentation on Osage ribbon work by Randy Tinker Smith; panel discussions on Native American children in the foster system with tribal judges; and the keynote speaker for the second day of the conference was Ashley Rhodes, author of the New York Times Best Selling, “Three Little Words” and “Three More Words.”

Stabler conducted an Osage cradleboard demonstration, putting 3-month-old Mina Hernandez on a cradleboard for the first time. Her young mother, Sarah Ramirez, looked on as Stabler slowly and steadily began to wrap an agitated and crying Mina in cloths and Osage yarnwork to the cradleboard. Onlookers watched in disbelief as Mina stopped crying and became peaceful as Stabler finished. There was a collective coo as Stabler held up the cradleboard with a content baby Mina inside.

The first day of the conference finished with a fashion show from prominent Osage designer Wendy Ponca, who is a trained artist and a former teacher at the Institute of American Indian Art in Santa Fe, N.M. Her show consisted of all Osage models, wearing her colorful flowing dresses, shirts, and pants, that were occasionally adorned with Osage ribbonwork and Osage imagery printed on the fabric. Her coats with Native prints and embellishments were breathtaking as Osage/Kiowa model Cherlynn Satepauhoodle stunned the crowd.

Red Corn began with a story about a case she tried early in her career, that dealt with sexual abuse and minor children in an African American family. The case went all the way to Kentucky’s Supreme Court and changed laws in the state.

She spoke about the types of abuse that can affect families and children and centered on historical trauma – something that affects many Native families across Indian Country.

She said studies show that traumatic stress can affect a child’s body, their brains. It can lead to substance abuse, violence, eating disorders, smoking and other high-risk activities. Traumatic stress can have long-term impacts on children like diabetes and heart disease, they can even die at an earlier age.

“It makes you wanna cry, it really, really makes you want to cry. When you think about what was happening to some of the young children that we’re raising to go into the world one day, but, there is good news,” she said. “Children are not always doomed. When a child experiences trauma, they don’t always develop traumatic stress because there are protective factors. Certain factors that can buffer a child from adverse effects.”

She said those protective factors are culture, race, ethnicity of the children, their families and their communities. Cultural identity has been found to have a positive impact on how children respond, recover and heal from a traumatic experience, she said. That’s why trainings like the Annual Osage Women’s Conference are so important.

She said the work that CASA volunteers do can be vital for children. She encouraged everyone in the room to become an advocate on behalf of Native children, and if possible, a CASA volunteer.

“There can be few things more important in our lives than having a positive impact in moving a child from trauma to recovery, especially a child that is not our own. We can do something about it. Each of you, whether you’re a CASA volunteer now or soon to be, can play a role in moving a child from trauma to recovery,” she said. “So, if you’re thinking about it, just think about it, but move toward it, because there is something each of us can do to make a difference in a child’s life.”