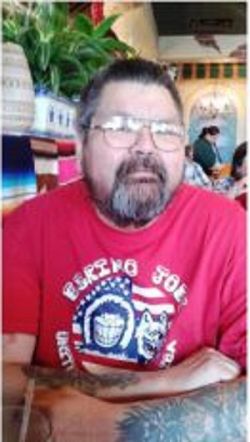 A lifelong resident of Fairfax, he was a member of the Osage and Loyal Shawnee tribes. He attended Fairfax schools and the New Hope Church. Bill started his work life by helping his Dad weld in Phillips properties in the Burbank and Shidler area. Later, he worked in Baltimore and along the east coast cutting down oil tanks. Following an injury, he moved on to his life’s work of native arts and crafts. Joining his Aunt Snooky, Bill followed the pow wow trail up and down the east coast. He established a following with his leather work, unique items, and leather-trimmed canes. He was known for his generosity in helping out dancers needing a quick repair or if they were short on a giveaway.

Bill is the son of Jack Hickey Sr. and Cora Miles Hickey and was born in the Hamil Hospital in Fairfax, Oklahoma on March 24, 1963.

He is survived by his daughter, Denay Chee Hickey and her mother Cathy; his mother, Cora Hickey of the home; a brother, Jack Hickey Jr and wife Chee of Sioux Falls, South Dakota. Uncle Frank Hickey, Aunt Ellen Mae (Boyd) Thomison and Mary “Snooky” Bighorse Wiseman. Cousins, Boyd Thomison Jr, Charles Anthony Thomison, Vivian Hickey, Madelyn Beason, and Janet Franklin Emde. Numerous nieces and nephews, including special niece Sam Harding, who called Uncle Bill her “Buddy” and she was his “partner”. Our family would like to recognize our friend, Joe Washington, for his unwavering friendship and support.

Bill will be at the Grayhorse Chapel Wednesday evening and Thursday, August 15 & 16, 2018. Funeral Services will be 10:00 a.m. Friday, August 17, 2018, with burial immediately following in the Grayhorse Cemetery under the direction of the Hunsaker Wooten Funeral Home of Fairfax.