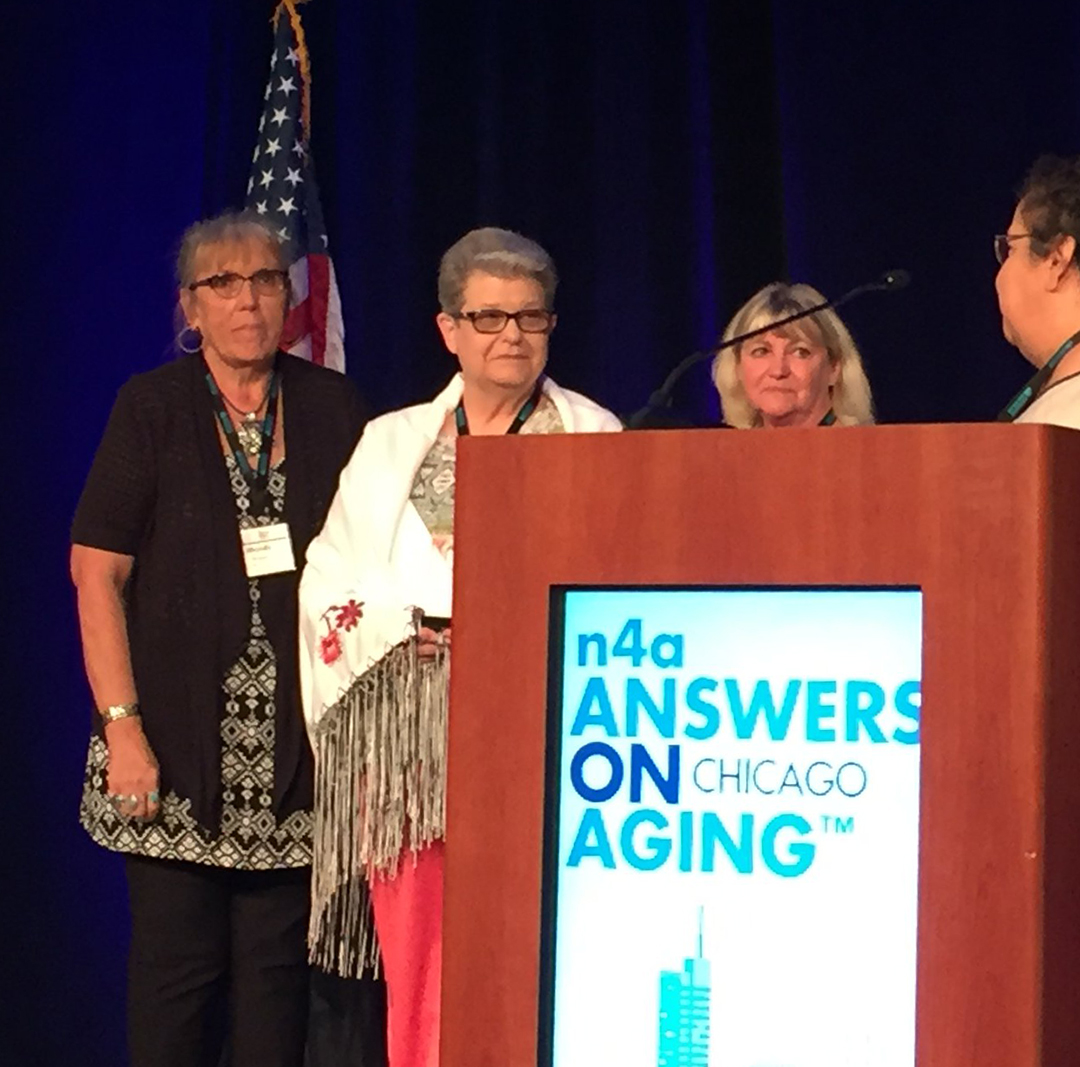 A long-time Osage Nation employee is an award recipient for her work efforts in serving Osage elders each week through the Elder Nutrition Department’s meal program.

Roberta “Sue” Slinkard received the n4a Excellence in Leadership Award from the National Association of Area Agencies on Aging in July during the annual n4a conference, according to an ON news release. Slinkard is a 30-plus year ON employee who is director of the Elder Nutrition Department (also referred to as the Title VI program), which serves weekday congregate lunch meals at the Pawhuska and Fairfax facilities and delivers the midday meals to Osage and Native American elders who are homebound.

“I was awarded the Leadership Award for my years of working with the Osage Nation Title VI Program…for my years of service to the Osage Elders. I have worked at the local, county, and state level to improve the lives of our elders… (And for) being a member of the Oklahoma Indian Council on Aging, and the National Association of Area Agencies on Aging (n4a),” Slinkard said in the release, adding “I was very honored by this award.”

According to the n4a website: “The n4a Excellence in Leadership Awards are given to AAA (Area Agencies on Aging) and Title VI directors or their affiliates (staff, Board or Advisory Council) who have demonstrated exceptional leadership capabilities at the local, state or national level in advancing the mission of the Older Americans Act and preparing communities for our nation’s rapidly aging population. Winners are nominated and then selected by a panel of their peers.”

On her work at the Nation, Slinkard said in the release: “The years that I have worked for Osage Nation Title VI have been a blessing for me. The elders are like family and I look forward to seeing them and checking on them each day.” Slinkard is the granddaughter of Charles L. Labadie and the daughter of Blanche "Angie" Labadie Mounts. She grew up in rural Osage County and has lived there most of her life. She is a member of the First Baptist Church of Pawhuska where she started a special needs class and she is a longtime volunteer for the Osage County 4-H Program.

The ON Elder Nutrition Department serves weekday congregate meals to the public at its Pawhuska site located at 350 Senior Dr. in the Senior Circle housing development and at the Nation’s Fairfax family center located at 401 S. 8th St. The department also delivers the weekday meals to homebound Osage and Native American elders in the Nation’s Osage County service area.

For more information and to view a downloadable copy of the monthly meal menus, visit the department’s website at: https://www.osagenation-nsn.gov/what-we-do/elder-nutrition

Osage and Native Americans over age 55 pay a suggested donation of $2 per meal. Those under age 55 pay $6 per meal at the Pawhuska and Fairfax sites including ON employees who do not meet the qualifications to pay the elder meal cost, according to the website. The Pawhuska Elder Nutrition site can be reached at (918) 287-5454 and the Fairfax site can be reached at (918) 287-5248.