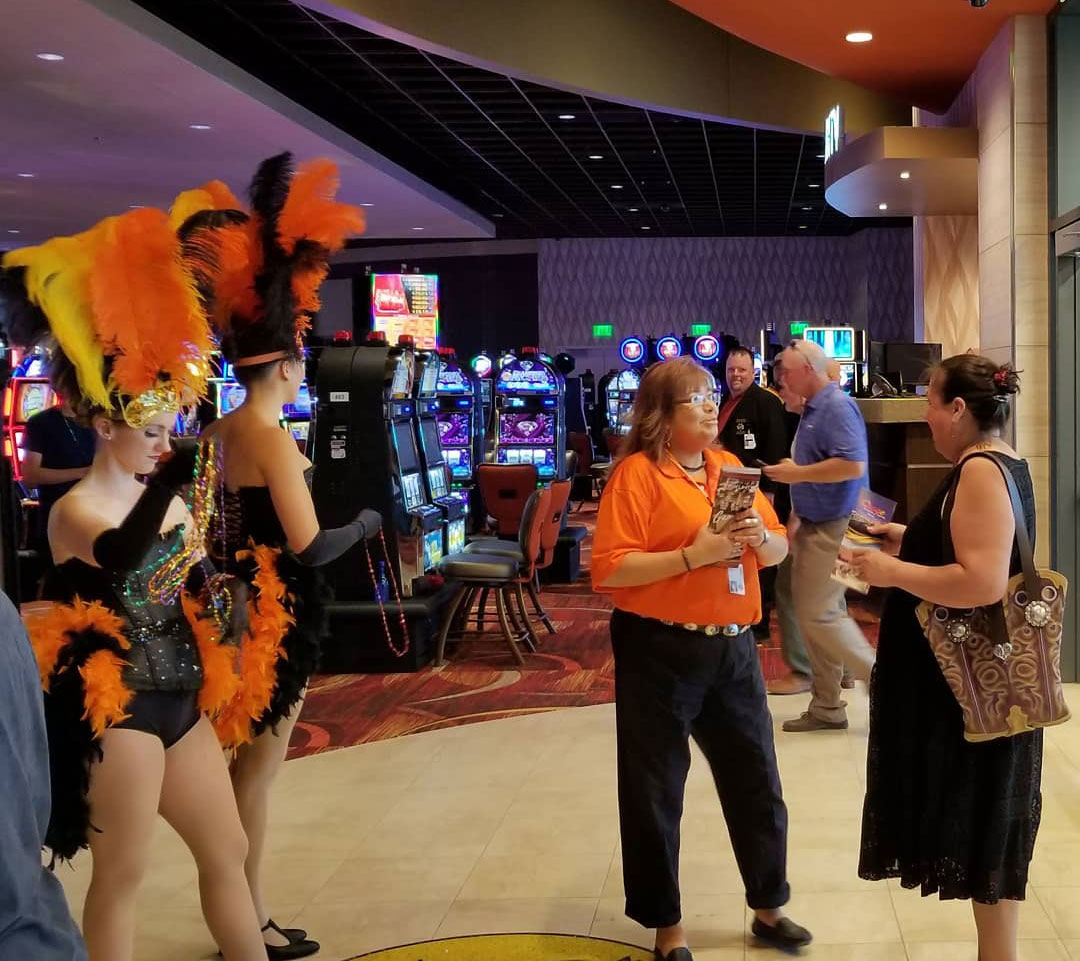 TULSA, Okla. – One by one, Osages and their guests arrived here at the new flagship Osage Casino Hotel on Aug. 28 to preview and experience the Osage Nation’s newest gaming venue hours before it opened to the public the next day.

Once inside, the hundreds of patrons socialized and gambled on the various games offered on the ground-level gaming floor. On the lower level, patrons enjoyed catered food and soft drinks served in the banquet and meeting rooms and walked outside to view the pool and spa in front of the 141-room hotel tower.

Osage Casino management hosted the three-hour preview event, which was later extended by one hour, to Osages who came from both Osage County and afar to view the new casino and hotel amenities.

At the front doors, Christy Red Eagle, casino marketing staffer, greeted people as they started arriving at 6 p.m. She shook hands and hugged those she knew and told everyone “Welcome to our casino!”

Casino and Osage Nation government officials offered congratulatory remarks on the completion of the Tulsa Osage Casino & Hotel at the event. Principal Chief Geoffrey Standing Bear said he was proud to be a part of a collaborative effort with other entities to bring the project to reality starting in 2016. He acknowledged the other entities including his office, the ON Congress and casino management who worked on the financial and planning front, so project construction would start.

“You’re standing today at a pinnacle of a historic moment for the Osage tribe. As members of the Osage Nation, you get to be the first to explore this $160 million hotel and casino,” said Osage Casino CEO Byron Bighorse. “Through revenues generated from this gaming and entertainment complex, we can help fund health care, education and cultural initiatives in our community that would otherwise not be possible. One of the primary goals for Osage Casinos is to also create jobs.

Bighorse said the new Tulsa casino is going to generate $32 million in salaries and wages to the region with approximately 200 employee positions at the property.

“This is a big step forward in our growth, it strengthens our ability to be a stronger Nation and more self-sufficient,” Standing Bear said. “I thank everyone that came today and supported the efforts of our Nation. We are looking forward to welcoming our patrons to an enjoyable gaming experience and congratulations to everyone.”

Gaming Enterprise Board Chairman Mark Simms said he is “really excited to see this come together. The gaming board and the casino staff have worked hard, hours put into this … I remember when a long time ago when we just started with Bingo and look where we came now.”

Attendees also socialized and enjoyed drinks at the Nine Band Brewing Co. Brewery, which features a bar and 20-barrel brewhouse to make beer in-house. Osage Casino partnered with Allen, Texas-based Nine Band Brewing Co. to bring the brewery to the casino. Bighorse said pursuing the brewery is part of efforts to attract a younger demographic to the casino which enjoys microbrew beer.

Construction is still ongoing on a new 15,000 square-foot event center to host concerts and special events on the north side of the casino. Simms said he hopes the same collaborative efforts will be used to pursue the next phase of the project to add a second wing of hotel rooms “because I think we’re going to be overbooked when we open our event center, it’s going to be really awesome.”

Osage citizen Louis Gray was among those who previewed the casino, which he said “felt like Las Vegas,” adding he is excited to see what the new casino brings to the Nation for growth and providing for the people.

Avis Ballard also said she is excited for the casino to open, adding: “I really enjoyed the preview event. The staff did an outstanding job with the food and gifts. I was impressed by the hotel rooms and pool. Everyone loved the Osage Casino logo in the pool, the décor and artwork are so nice. I love that Osage artwork is featured throughout the hotel – It looks like a resort! I think that the opening of this new large casino really puts the Osage Nation on the map in terms of being an entertainment destination in Tulsa.”