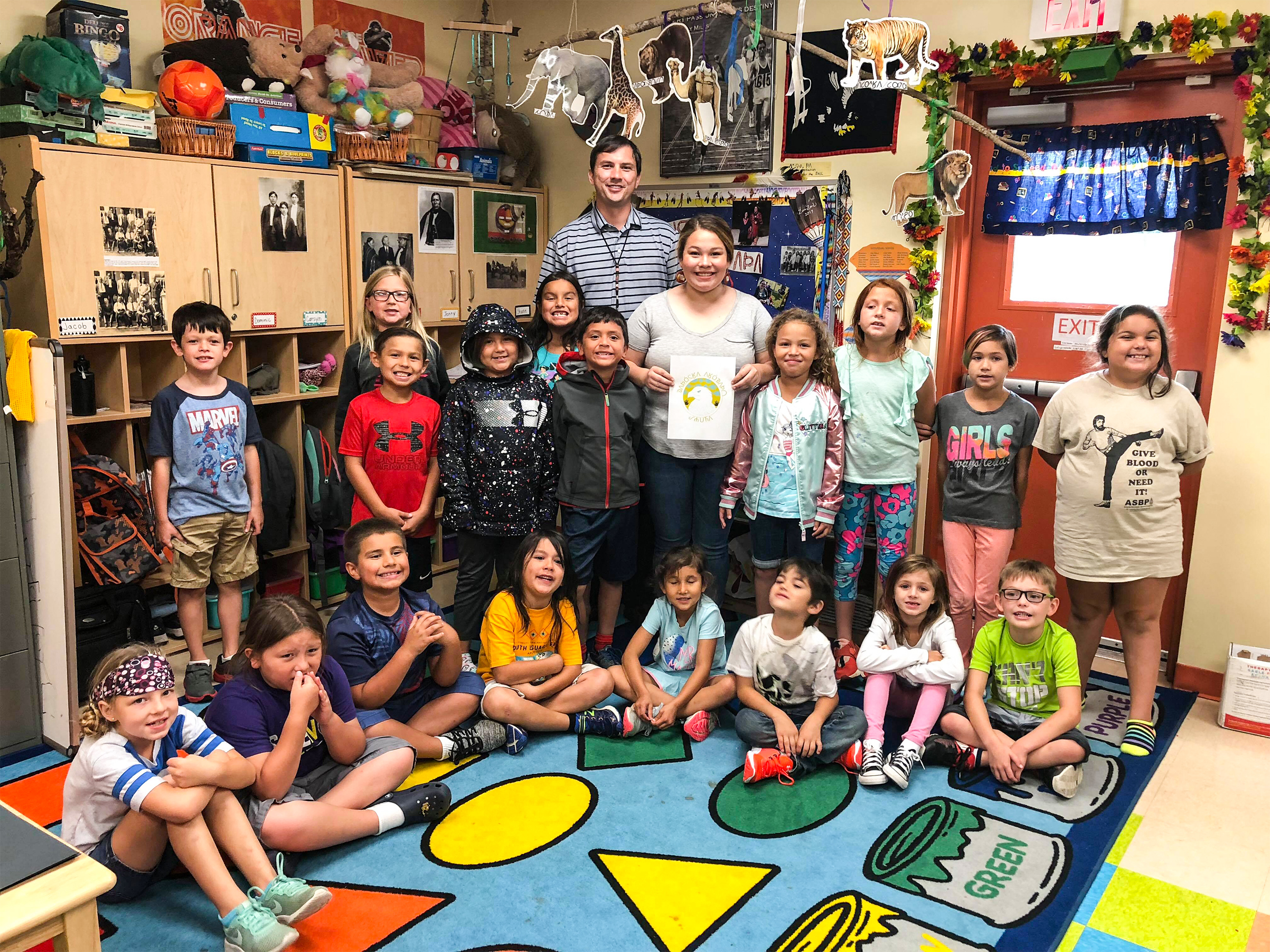 Sixteen-year-old Mia Jones is a young artist to watch. She is the unanimous winner of the Osage Language Immersion School’s Sports Logo Contest.

Her pencil drawing of an eagle, with a fierce look in his eye, against a background of ribbonwork, Osage symbols, and the Osage orthography won the vote of the school's parents and staff. Nine entries were submitted for the contest, eight were from local artists and one entry was from an Osage in Texas. The orthography on her design spells out “Our School” and “Eagle.” For her efforts, she won $500 and her design will be featured on the Immersion School’s uniforms for cross country and basketball for years to come.

“I’d like to thank Mia Jones for her contribution to the Immersion School’s sports teams. I taught Mia Osage I at the Pawhuska High School a couple years back and I can remember a drawing that she did of a buffalo on a grassy hillside with an orange and red sunset nestling behind the horizon,” said Immersion School Headmaster David Webb. “I remember thinking that Mia had a special talent and that I’d one day see her art prominently displayed throughout the Nation. Well, in just two short years, Mia has created Immersion’s sports logo that will be seen by many. I have no doubt that this is just the beginning and we’ll all see much more from Mia in the not too distant future.”

Mia, who is a Junior at Pawhuska High School, created the logo in a day.

“My inspiration ... I thought about my E.Ko, and my aunt Gina. I also spent the summer with my uncle Dante, and he gave me a lot of inspiration,” she said.

Her E.Ko, Osage for grandmother, is the late Mary Bighorse who passed away in December of last year. Bighorse was a cultural elder and was known for her singing, knowledge, ribbonwork, and beadwork. Her aunt Gina is the late renowned artist Gina Gray, whose artwork is in museums and collections across the world. Her uncle Dante is Gray’s son, artist Dante Biss-Grayson, who lives in Farmington, N.M., and has a bustling art career of his own. His paintings are featured in the new Osage Casino & Hotel in Tulsa.

She said another teacher of hers has been her aunt Addie Roanhorse, who is Gray’s daughter and the head graphic designer for the Nation. Roanhorse has a successful art career as well.

Once Mia’s design was selected as the winner by parents and staff, Roanhorse digitized the design and presented it to school leadership in seven color variations, using the school’s colors of Turquoise, Gold, and Black. School leadership agreed that all the color variations will be kept and used at a future time for t-shirts and other school apparel and merchandise.

The Immersion School received a $5,500 sponsorship from Osage Casinos at the beginning of the school year for the logo contest and its sports teams.

On the morning of Sept. 4, Mia and her parents, Shannon and Jacque Jones, entered the Immersion School so Mia could accept her prize. Mia’s little sister Kynlie, who attends the second grade at the school, excitedly hugged her big sister. The first and second-grade students posed for a photo with Mia; they will be the first students of the school to wear her design.

Mia said that after she finishes high school she plans to attend the Institute of American Indian Arts in Santa Fe, N.M. Her preferred medium of art is painting, and she is honored to have been selected the winner of the logo contest.