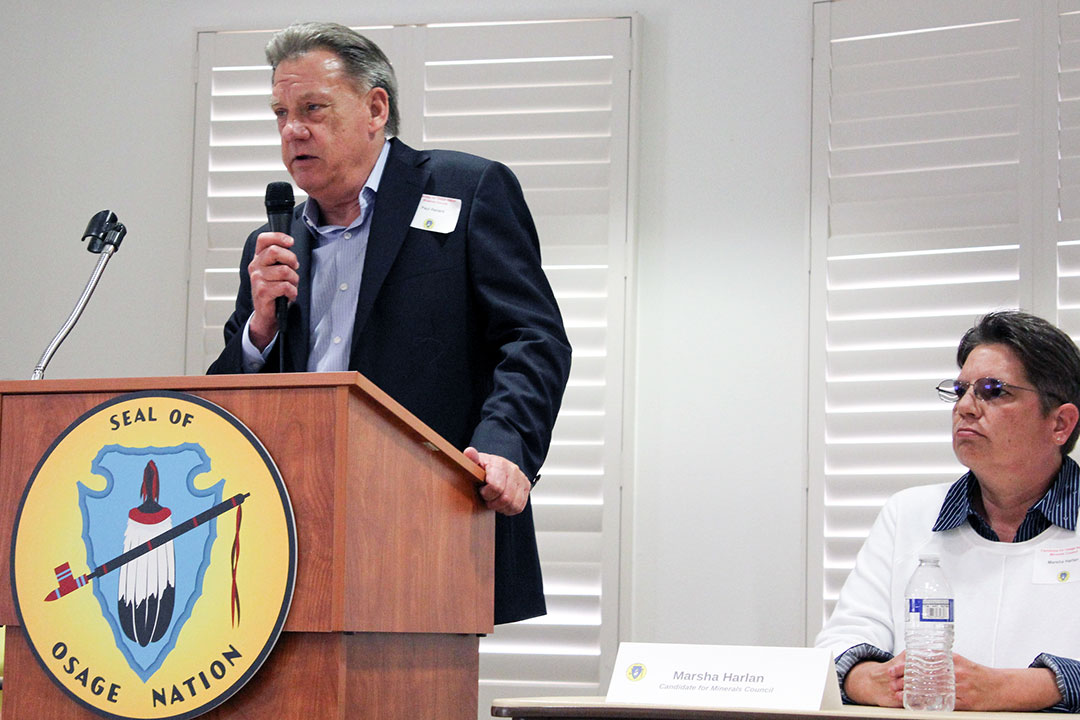 Photo caption: Osage Minerals Councilman Paul Revard shares his thoughts on the campaign trail on April 21 at the United Osages of Southern California spring gathering. OMC Chairwoman Marsha Harlan has asked the ON Attorney General to weigh in on Revard’s ability to vote on oil production matters. BENNY POLACCA/Osage News

A member of the Osage Minerals Council potentially impacted by a recent attorney general’s opinion on conflicts of interest has no qualms about its potential impact on his abilities as an elected official.

In mid-August, the Office of the Osage Nation Attorney General issued ONAG 2018-05, which states that a potential conflict of interest does exist if a Minerals Council member owns and operates an oil and gas company and conducts business within the tribe’s mineral estate.

In a written statement, Councilman Paul Revard, who owns a Tulsa-based independent oil and gas exploration company and has worked in the petroleum industry for 40 years, welcomed the opinion and reiterated his commitment to his oath of office.

“All eight of the council members swore an oath of office that included a statement that we will ‘always place the interest of all Osages above any and all special interests,’” he said. “I plan to continue this oath and should a potential conflict of interest arise due to the fact that I happen to be an Osage County producer, I would follow the procedures to the potential conflict at the direction of the Osage Nation Attorney General.”

In the opinion, First Assistant Attorney General Clint Patterson specifically limited the conflict to lease approvals within the industry a council member works and notes that ownership in an oil and gas business would not automatically preclude a Minerals Council member from voting on other issues that fall under the council’s purview.

Noting that a conflict of interest can exist without violating the tribe’s Ethics Law, Patterson wrote that rather than selling the business or resigning from office, such a situation could be resolved by placing the business in a trust or abstaining from sponsoring or voting on measures that would potentially impact the council member’s personal finances.

“A reasonable man could foresee that the personal economic interest of an Osage Minerals Council member, who is an oil producer, would be affected in a different manner than the general public if that member is also responsible for approving leases to other oil producers,” Patterson wrote.

The opinion does not specifically name any council members. However, Osage Minerals Council chairwoman Marsha Harlan announced in July that she formally requested an opinion from the Attorney General’s office in reference to Revard and whether he would have to recuse himself on oil production votes.

“In an effort to avoid a conflict of interest or even the appearance of the same, I think it was a good idea for our Chairwoman Harlan to seek the opinion of the Osage Nation’s Attorney General … in this regard,” Revard said.

According to minutes published on the council’s website as of press time, Revard has abstained from two votes since taking office: one regarding a lease rate for Marlin Oil Company and one to maintain the minimum bid rates for the council’s upcoming lease sale.