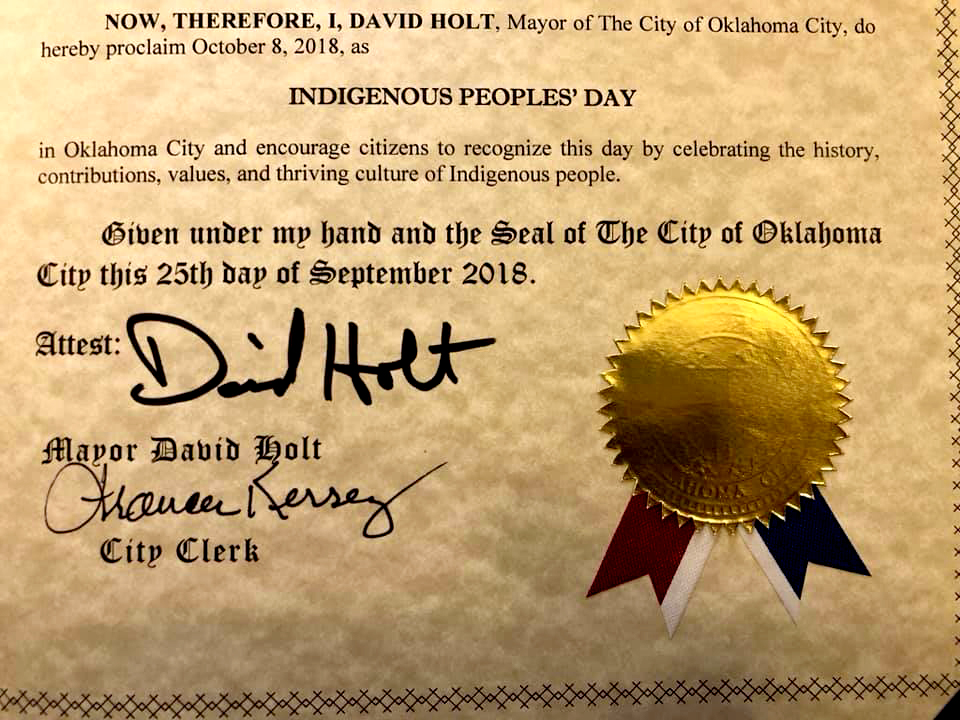 Photo caption: Oklahoma City Mayor signed a proclamation on Sept. 24 declaring Oct. 8 as Indigenous Peoples' Day. He is the first Native American Mayor of Oklahoma City and he is an Osage Nation citizen. Courtesy Photo

TULSA — Columbus Day may still be a federal holiday, but the planned celebrations for Oct. 8 in Oklahoma’s two largest cities are decidedly more Native.

In honor of Native American Day, a parade is scheduled to go through downtown Tulsa starting at 11:30 a.m.

Additionally, a free screening of the film version of “Nanyehi” is scheduled to start at 7:30 p.m. at Guthrie Green. The musical is based on the life of Revolutionary War-era Cherokee leader, or beloved woman, Nancy Ward, who acted as a mediator between Cherokees and white settlers.

At the request of the Greater Tulsa Indian Affairs Commission, Tulsa made the switch in 2017 from Columbus Day to Native American Day with unanimous support from its city council.

Meanwhile, down the Turner Turnpike, Oklahoma City will officially observe Indigenous People’s Day for the first time thanks to a proclamation signed on Sept. 25 by Mayor David Holt, an Osage Nation citizen.

“Whether called Indigenous, Native, Native American or American Indian, we value the contributions made by our citizens of Indigenous heritage, as we value all people,” Holt tweeted with a picture of the signed proclamation.

The Oklahoma City Council previously rejected two requests to make the change, with objectors claiming that the matter is one that needs to be decided at the federal level rather than the local level. In a statement to the Associated Press, Kristy Yager, a spokesperson for Oklahoma City, said Holt’s proclamation eliminates the need to bring the matter before the city council again.

Planned activities include an official proclamation reading at noon in the Chickasaw Sculpture Garden at Oklahoma City University and a 6 p.m. history and education panel in OCU’s Tom and Brenda McDaniel University Center.

Other Oklahoma communities observing Indigenous People’s Day include Anadarko, Norman and Tahlequah. The Osage Nation observes Oct. 8 as Osage Day and all Osage campus offices will be closed in observance of the holiday.