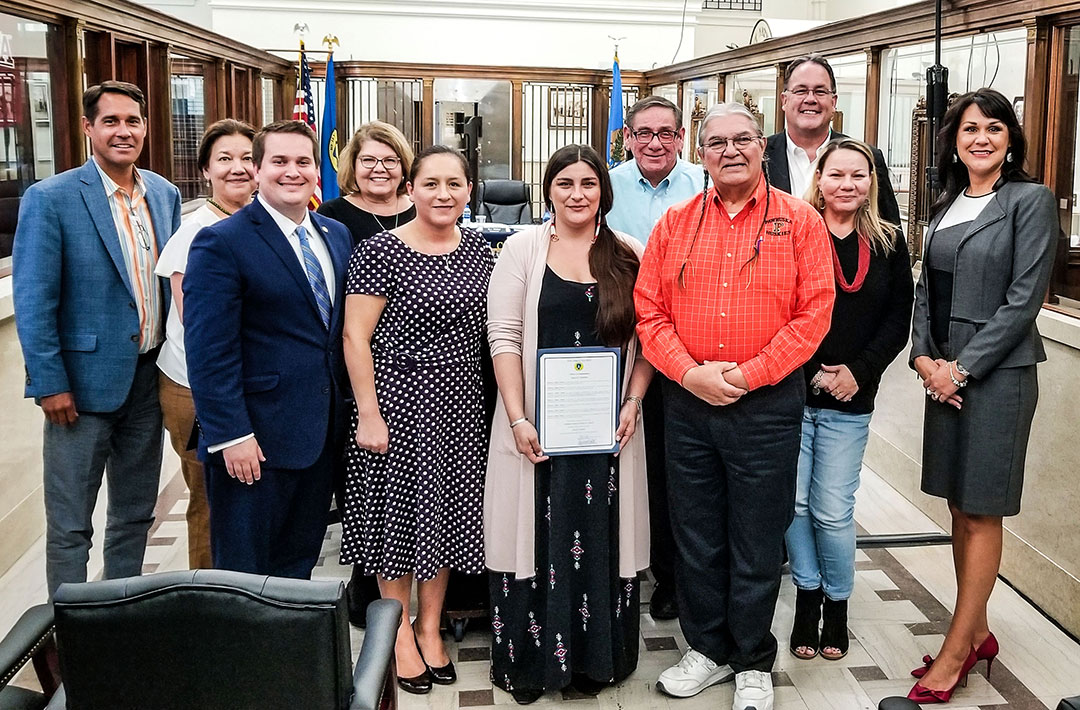 Hallie Winter’s last day as the Osage Nation Museum Curator was Sept. 28 and the well wishes from the Osage community were heartfelt and congratulatory on Facebook.

At the helm of the museum for just three years, she transformed the museum to an interactive community hub that featured new exhibits, never-before-seen items in its collection, artist retrospectives, artist spotlights, events for youth and many memorable workshops for the community.

“It’s official, I will be leaving the Osage Nation Museum at the end of the month to take a new position as the Collections Manager/Registrar for the American Indian Cultural Center Museum in Oklahoma City,” she wrote on her Facebook page. “I would like to thank my family and friends, the Osage Nation, and its citizens, for supporting me during my three years as the ONM’s Curator. I am looking forward to this next chapter and wish nothing but the best for the ONM in the years ahead.”

The AICCM officially opens in 2021 and will tell the history of Oklahoma’s 39 tribes. Executive Director James Pepper Henry said in a prepared release that Winter is a highly qualified American Indian museum professional and has accomplished much throughout her career.

“The Osage people can be assured that one of their own has an important role in developing and sharing the collective American Indian experience in Oklahoma today,” he said in the release. “We look forward to further strengthening our relationship with the Osage Nation and the other Native nations across the state of Oklahoma and around the country.”

Winter, born in Tulsa but raised in Buffalo, N.Y., attended college at SUNY Buffalo State where she earned her Bachelor of Art in History with a minor in Museum Studies. Before she joined the ONM, she worked as a program coordinator for the past eight years at the Center for Exploratory and Perceptual Art, a three-gallery collaboration of three non-profit organizations.

She was always quick to disclose that she did not grow up in the Osage community, but it did not deter her as she made lasting friendships and connections with Osages from all three districts. She participated in the annual In-Lon-Schka dances and helped the cooks prepare Osage feasts.

Osage Congresswoman Angela Pratt sponsored a commendation for Winter and she was honored on the last day of the Tzi-Zho Session for her dedication and service to the Osage Nation and its people.

Last year she helped the ONM to win a $23,000 federal grant for a two-year project to train staff on photographing and digitizing the museum collection items. The ONM was one of 75 institutions from across the country selected in 2017 to participate in the inaugural Collections Assessment for Preservation program to receive feedback for improving its collection. She won a travel fellowship to attend the American Alliance of Museums Annual Meeting and Museum Expo in St. Louis in 2017 and the ONM staff was selected out of 400 proposed session submissions for their proposal, “Museum Rehab: Starting Over at the Osage Nation Museum.”

Under her leadership, the ONM collaborated with many museums in the state and country. In 2016, the ONM collaborated with the Fred Jones Jr. Museum of Art in Norman, Okla., on a Native American photography exhibit featuring descendants of Osage Allottee John Bigheart. She partnered with the Sam Noble Museum for the museum’s 80th Birthday Celebration for their current exhibition, "Wedding Clothes and the Osage Community: A Giving Heritage.”

On her last day she captioned a black and white photo of the museum with the words: “So many emotions, not enough words. I will miss you my friend.”

“Being the director of ONM has allowed me to delve deep into Osage history and to be an active member in our community. This position has allowed me to grow both personally and professionally and I will be forever grateful to the Nation for giving me this opportunity,” she said in the release. “I’m very proud of the work I have completed here, and I am confident that the ONM is set up to succeed in the future and to grow.”

The National Center for American Indian Enterprise Development named Winter as part of their 2018 class of “Native American 40 Under 40.”

The NCAIED selects recipients from a long list of nominations from across Indian Country. Each year they put out a call to tribal nations to nominate members from their communities under the age of 40 who have demonstrated leadership, initiative, dedication and have made significant contributions in business and to their community, according to a prepared release. This is the 10-year-anniversary of the awards.

The event - "Impacting Generations: Honoring a Decade of Exceptional Service and Leadership" - will be held in conjunction with the National Center's next Native Edge Institute, a one-day training session focused specifically on procurement.

The recipients will be honored at the River Spirit Casino Resort in Tulsa on Oct. 29-30.