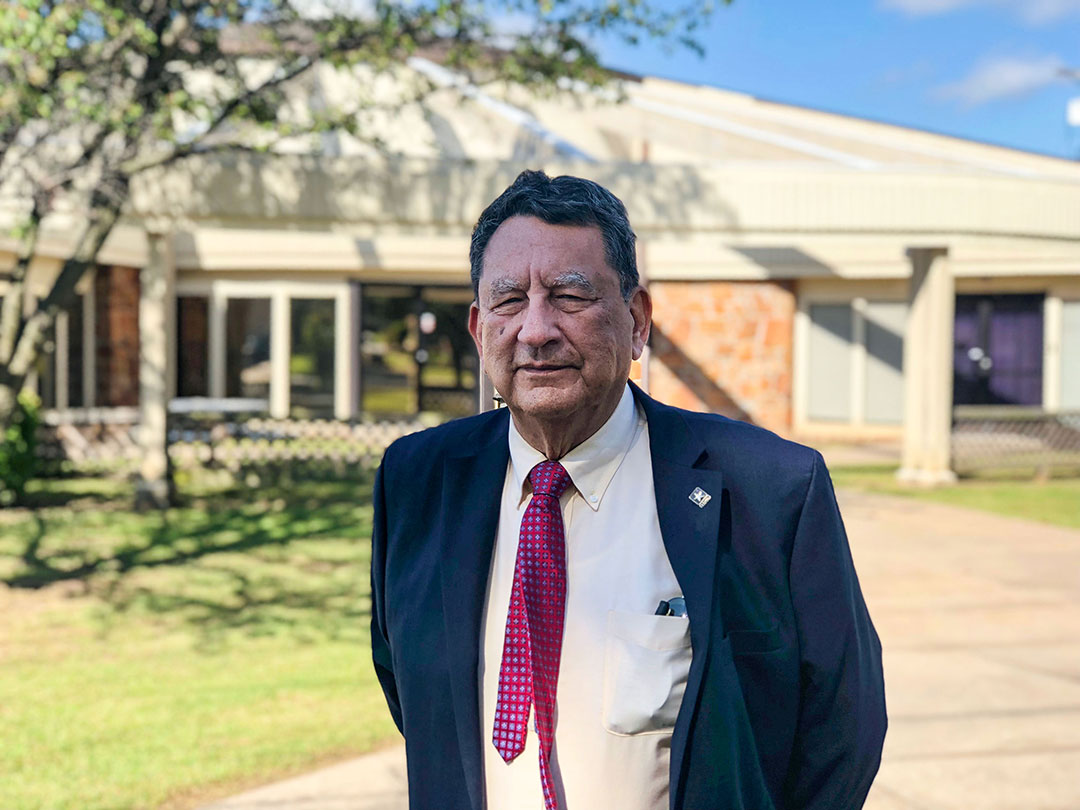 In June of this year, he officially retired as the Osage Nation’s Chief Trial Court Judge, a post he’s held since the formation of the new government in 2006. He said it was time to do something else, and one to never rest, he will be attending the National American Indian Court Judges Association this month in Albuquerque, N.M.

He remembers receiving the call to be the Nation’s first trial court judge, and he also remembers that he didn’t want to do it. He had just moved back to his hometown of Fairfax after having suffered two heart attacks in Arizona. He had just undergone triple bypass surgery. It was during his recuperation that he was asked about the appointment.

“I think it was in November of 2006 when I was sworn in, the surgery was in September, and it’s a long recuperation period. There’s no good time of the year because the recuperation period goes from season to season,” he said. “So, I came over and was sworn in and they asked me if I could start Monday and I said no. They asked me, ‘Well, why not?’ and I said, ‘Because I’m recuperating from heart surgery.’”

He started his post at the first of the year in January of 2007. In the beginning, his caseload consisted of the civil docket, “which is almost everything,” he said. He also took care of the child support docket, “We have a very good child support office here,” small claims docket, and the criminal docket. As the years passed his caseload progressed.

“At the very beginning of our new Constitution in 2006, my office reached out to Marvin as I learned he had just retired and moved back home to Gray Horse. I appointed him, and the Osage Nation Congress confirmed him in his first term,” said former Principal Chief Jim Gray. “He served honorably throughout his first term and successfully was retained by the Osage people in 2010 and again in 2014. I have enormous respect for him and will always appreciate his service to the Osage Nation Judiciary Branch in those critical first moments of our Nation's transition to a democratic form of government.”

Stepson graduated from the University of Central Oklahoma in 1971 with a Bachelor of Arts in History and two minors in Political Science and English. Afterward, he went to work for the Department of Human Services and reviewed applications for assistance. He was recruited to join the Oklahoma Crime Commission, “the best job I ever had,” which he reviewed applications for funds and was then promoted to the planning department within the OCC. “I got funds for the Osage County Sheriff George Wayman to hire an Indian Deputy, as a matter of fact. I did that for a couple others as well,” he said.

He went to law school in 1974 and received his Juris Doctorate from the University of New Mexico School of Law in 1977. He said after the first semester he wanted to leave but he “stuck it out.” During his time at law school, he worked for the American Indian Law Center as a research assistant on the children’s code, which was what existed before the Indian Child Welfare Act. He also worked as a teaching assistant in Indian law.

After law school, he went to work for the Oklahoma Indian Affairs Commission as their staff attorney.

“In 1979 we formed the Oklahoma Indian Police Academy at Chilocco because there had been some cases that had come down that ruled Oklahoma had Indian Country. That was for western Oklahoma at the time and it had not reached us over here (eastern Oklahoma) yet,” he said. “Browning Pipestem did the organization of it and I did the footwork. We got people from the Feds and the State to come in and teach different courses for several weeks. Then they went to work for tribes, they went to work for the BIA … and it wasn’t without a lot of resistance. After we did that I thought, ‘I think I’ll go and practice the law for a little bit.’”

In the late 1970s and 1980s, tribes relied on the Court of Indian Offenses to adjudicate disputes. Stepson became a circuit prosecutor for the Anadarko region which consisted of about five to seven Indian agencies for various tribes in western Oklahoma. The CIO had four judges, his friend the late Browning Pipestem (Osage/Otoe), Vincent Knight, Ryland Reevis, and Howard Goodbear.

“I still have my certificate from the bar association of the Court of Indian Offenses, has all of their signatures on it. It’s kind of water stained but that’s because it’s 40-something years old,” he said smiling.

Pipestem’s son Wilson, who carried on his father’s legacy as an attorney for Pipestem Law, said he remembers Judge Stepson from his youth, not only as a lawyer but as a traditional Osage from the Grayhorse District.

"Our Dad thought highly of Judge Stepson, not only as a lawyer and professional, but also a brother and culture keeper in Grayhorse," he said. "As kids, we were raised around the good words and laughs of Marvin, Jess Burris (Osage), and our Dad, over all-you-can-eat meals. They talked about the law, protection of sovereignty, and service to the community."

Stepson worked as a prosecutor for the Court of Indian Offenses until the 1980s and then contracted to supply the prosecutorial services for the whole Anadarko area. Once there he received a welcomed surprise, all the attorneys working the area were Osage attorneys. Pipestem, Burris, and Terry Mason Moore.

“I worked with Marvin in the late 80s when he, Browning Pipestem, Jess Burris, and I worked in the CFR courts on a prosecutor contract out of the Anadarko Area Office. Marvin had the Shawnee agency for those tribes. Browning had Concho agency tribes, Jess did Anadarko agency tribes, and I had Ft Oakland for the Pawnee agency tribes,” Mason Moore said. “These were the days before tribal courts. I was honored to work with them and learn from these esteemed older attorneys.”

Stepson said after their time in Anadarko was coming to an end, tribes were slowly beginning to form their own courts, making their own codes. “Something every tribe should do because tribes are limited to what they can do in a CFR court,” he said. In the meantime, he was a Tax Commissioner for the Absentee Shawnee.

In 1987, when the Citizen Potawatomi formed their own courts he was appointed to their Supreme Court. He also served as a Supreme Court Justice for the Sac and Fox and the Kickapoo. In the early to mid-1990s he was a prosecutor for the Ute Indian Tribe in Utah where his caseload was about 1,200 criminal cases per year.

After he left the Ute, he became the Tax Commissioner for the Osage. At the same time, he served as a judge for the Pawnee and Ponca. In the mid to late 1990s Stepson was appointed as the Trial Court Judge for the Osage National Council. Court was held on the second floor of what is now the ON Executive offices.

When the National Council form of government was abolished in the mid-1990s, he worked for the Bureau of Indian Affairs doing probates. He said he organized the probate office in Aberdeen, S.D., and many tribes used the model he developed. He did that for a year and then went to do probates in Arizona.

“That was a great job too because I traveled the length of and width of Arizona, from the mountains to the desert. Sometimes I would be gone a whole week. I did as many as 14 cases in one day. Everything that I had, I had in a big box and I took that with me, and so I had everything ready to go – draft orders ready to go,” he said. “Yeah, I would leave Phoenix Monday morning and go all the way to Sells, Ariz., which is almost to Mexico and then hit San Carlos, White Mountain Apache, then all the way up north to Truxton Canyon.”

He said there was beauty in even the most desolate desert.

Then in 2000, he was appointed as a judge for the Osage but under the Tribal Council form of government. He was also a judge for the Pawnee and Ponca and said he worked only on Tuesdays, Wednesdays and Thursdays. “That’s why we have court here on Thursdays because that’s the way I set it up,” he said.

“I think the interaction with the staff of the police department and other staff is what I’ll miss. Some of the things I’m pretty proud of was putting together that police academy in Chilocco. I can’t remember how many individuals went but quite a few came out police officers. I don’t know exactly how many continued with a law enforcement career, but it was quite a few,” he said. “I’m proud of working for the Oklahoma Crime Commission, probably the best job I ever had, certainly the most satisfying. I liked the people I worked with and worked there for two-and-a-half years and never ever took annual leave. My vacations were the trips they sent me on. They even gave me a summer off to attend a summer law program.”

He said the Osage Nation’s sovereignty is reflected in its courts and its police department.

“It shows our sovereignty, that we can do things we need to do. There’s a U.S. Supreme Court case, Cherokee Nation vs. Georgia, that says Indians have the right to make their own laws and be governed by them, and that’s what we’ve done. When people act up, we apprehend them, bring them before the court. One of the things I’m pretty proud of, some courts they’re in it for the punishment, but we rehabilitate and provide opportunity for restitution – which gives people a chance,” he said. “Otherwise, we’re just an Indian club whose ancestors just happen to be Osage. If you don’t have those things you’re not much of a tribal government.”

He said he feels the state of Oklahoma has short-changed Native Americans over the years because for decades it should have been enforcing the Indian Country distinction and jurisdiction. He has been asked to explain the meaning of Indian Country many times and he feels there are too many in the U.S. government who don’t understand its significance.

“I don’t think the state appreciates what we do for them, by exercising our sovereignty. It takes a burden off them. We have enhanced the law enforcement in Osage County by the officers that we have, and they keep cutting our budget,” he said. “It makes our response time slower when you don’t have enough officers.”

When asked if whether the Osage Nation’s laws were unique to that of state or federal law, he said: “In the application of the law where we might want to apply custom and tradition, I don’t know that we have ever done that. We just have our own laws and they’re separate from state law. The application of law to civil and criminal cases is different. State law doesn’t apply here, and we’ve had people try to apply state law here and we’re not going to do that. It might be influential but it’s certainly not compelling.”

As far as his future plans: “I don’t have any plans. I’ve already traveled. But, I’ve always got my finger in the pie. I’m going up to New Mexico for the National American Indian Court Judges Association meeting. I’ll meet with colleagues out there, people I went to law school with. I almost became a judge at Mescalero Apache. I would go back to Utah if they needed help, but I don’t want to prosecute again.”