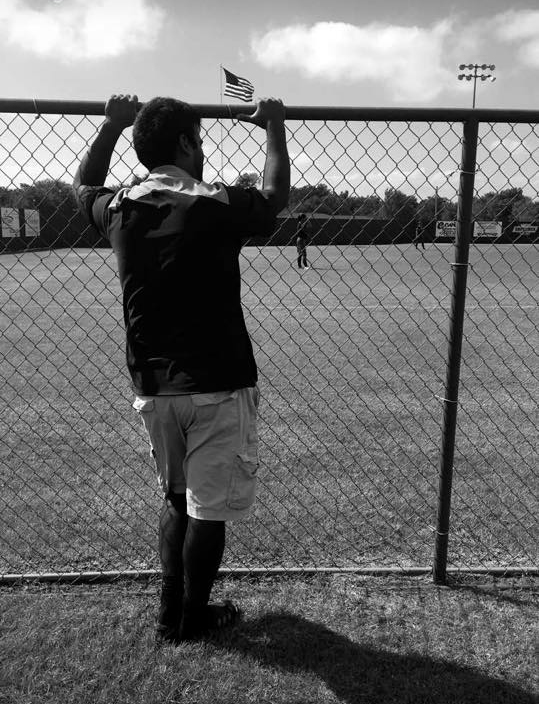 Photo caption: The girl’s father, who is Alaskan Native of Aleut descent, stood by the left field fence during his daughter’s second game against Amber-Pocasset High School to make sure no one racially harassed her. SHANNON SHAW DUTY/Osage News

In what should have been the highlight of her softball career, a young woman from Woodland High School said she was the object of racial harassment as she played in the Class A Regional softball tournament in Chickasha against Amber-Pocasset High School.

The young woman, who is Osage and Alaskan Native, of Aleut descent, was playing left field when she said Am-Po fans began to taunt her on Sept. 27. The girl’s mother said the fans started harassing her about her body first, and when that didn’t affect her, they moved on to racial obscenities. The young woman is identifiably Native American.

“They started calling her very racist names. She came to the dugout and was telling her teammate about it and our Assistant Coach overheard,” she said. “At that point is when I was notified about it.”

The girl’s mother notified an Am-Po school administrator of the situation, who was later confirmed as Am-Po Principal Bobby Odam.

“The administrator said he didn’t witness anything and couldn’t kick them out. I said I didn’t want them to be kicked out, I was just asking they be made to move,” she said. “I didn’t ask him what his name was because I was just really disgusted.”

She said Odam walked over to the left field fence where the fans were sitting, talked to them, then walked back and said the fans denied having said racial obscenities. He said since he didn’t hear it, he was allowing them to stay. Odam did not return multiple calls or an email for comment on this story. Am-Po Superintendent Jerime Parker called the Osage News but declined to comment on the record.

The girl’s mother found a state trooper who then walked over to the fans and asked them to move to the main seating area and they obliged. But the damage was done. The young woman had endured one of the most humiliating moments in her life.

“I have reached out to OSSAA and they emailed us back, that they are going to contact the administration at Amber-Pocasset,” the girl’s mother said.

Amy Cassell, OSSAA assistant director, said the playoff events are conducted by OSSAA but the Regional Tournament was hosted by Amber-Pocasset schools and the conduct of the fans would fall under the school’s jurisdiction.

“I received an email from what I assume was someone at Woodland, that described the situation at Am-Po, and so that is definitely a student body thing. It wasn’t a contestant in the contest, so I forwarded that on to Mr. Odam,” Cassel said. “It is a playoff event, that’s 100 percent correct, but it was actually hosted by Amber-Pocasset schools – it is an OSSAA tournament. Had it been a contestant, someone participating in the game that we were having an issue with, an umpire certainly would have some jurisdiction over that person. What the letter described were people behind the fence. So that’s a school administration issue.”

If the situation had involved a player, then her educated guess would be that the umpire would disqualify the player from the contest “and be required to sit out additional contests” and depending on the gravity of the situation there would be some additional penalties to the player. The OSSAA is a staff of seven and cannot be at every contest or tournament it hosts, said Cassell, it relies on the schools hosting the tournaments. On Sept. 27, the day of the incident, similar tournaments were being conducted for Class B, Class A, Class 2A, and Class 3A with eight tournaments going on in each classification, she said.

“To be honest, that’s why they’re hosted at schools, so there will be a school administrator on duty and there’s supposed to be one from each school. The visiting school and the host school, to handle anything that happens outside the contest,” she said. “I agree, it was a bad situation.”

Harmony Revard Fuller, an Osage LMSW working in Behavioral Health at the WahZhaZhi Health Center, said racism, bullying and other forms of abuse can have lasting effects on youth.

“Acts of racism are often traumatic experiences for people,” she said. “They are considered to be an Adverse Childhood Experience, which are events that children experience that traumatize both the mind and body. Children who experience ACEs are at risk of various health outcomes due to trauma harming their developing brains, which may lead to changing how they respond to stress.”

According to the Journal of Developmental and Behavioral Pediatrics, perceived racial discrimination is associated with poor child health, she said. Some of these health outcomes include high-risk health behaviors, mental or behavioral health issues, and physical health impacts. High-risk health behaviors observed in children who face racial discrimination are sometimes related to substance use and other unhealthy coping behaviors, such as smoking or vaping. Children also experience mental health concerns that can manifest into an increase of depressive symptoms and anxiety, which can lead to thoughts or acts of self-harm.

“We offer many behavioral health services at WahZhaZhi Health Center that are effective in addressing and treating trauma. Outside of general counseling, we offer Trauma Focused-Cognitive Behavioral Therapy which works to address trauma in children under the age of 18,” Revard Fuller said. “Often times, parents or guardians make initial appointments because of their child’s behavior (tantrums, outbursts, anger) and it is later discovered that there is a reason for these behaviors and it is often related to some form of adverse childhood experience.”

The girl’s mother said after the game against Am-Po on Sept. 27, the Cougar’s head coach spoke with Am-Po coaches and they apologized for the situation and the OSSAA apologized in their email to her. She said her daughter went straight to the bus after the game. She said she told the Am-Po coaches she didn’t feel it was safe for her daughter to play in the next day’s game because it was against Am-Po at their stadium.

“The next day we played at Amber-Pocasset and I told [Am-Po’s assistant coach] I didn’t feel safe bringing my child to play today and he assured me that something like this would never happen again,” she said.

The Cougars lost to Am-Po again on Sept. 28 and the same fans who allegedly harassed her daughter were at the game. Am-Po would go on to win the state championship.

“I just wanted these [fans] to have some education and ownership for what they did. That’s not going to happen because none of them are going to admit to it … it was just very disturbing,” she said. “It was such a long distance from their bleachers to the end of the left field bench, the field and how it was made, you can stand behind the left field bench and they were able to say it and nobody else was able to hear it but her.”