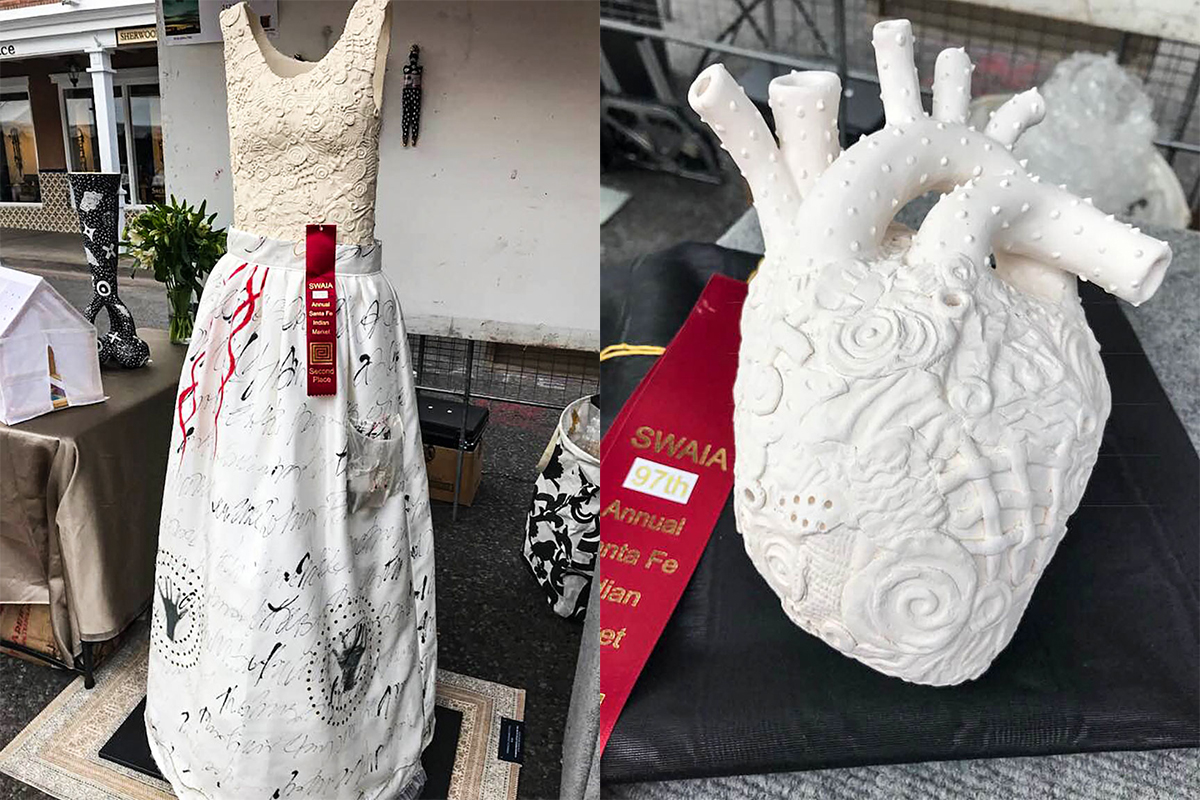 The SFIM is New Mexico’s largest attended annual event and brings the most gifted Native American artists from across the country. Millions of visitors and collectors from around the world visit SFIM weekend to view the best Native American artwork in the world.

Fields has been a regular at the SFIM since she was young when she was attending the Institute for American Indian Art. She has received numerous awards in her expansive career and her clay sculptures can be seen in museums and galleries around the world.

“Because I’m able to use clay, and the earth, I have this really strong feeling of how the earth holds the memory of the people who were there,” she said.

She visited with the Osage News about her inspiration for both pieces.

Finding Our Way to the Earth

The mixed media sculpture was created in 2016 for an exhibit curated by Heather Ahtone at Oklahoma State University titled, “From the Belly of Our Being: Art by and about Native Creation.”

“Heather wanted to talk about Native women who create and why they create and if you wanted that to be influenced by your own tribal creation stories, that would be one way we could look at it,” Fields said. “That is what I did and what I went to because my work is heavily influenced by those kinds of things anyway. This just gave me an opportunity to speak about it in a different way. I have always used textiles in a very small way in my clay work, but I’ve been wanting to start doing that in a larger form, in a larger way – combining the making of something out of fiber and incorporating that in a larger way with ceramics.”

The top bodice of the dress is made from white porcelain clay, imprinted with Fields’ own handmade stamps she makes from things that are personal and special to her. She uses a soft clay to imprint items such as earrings her grandmother gave her and other personal items and then uses them to embellish her work. They can be seen throughout her clay work as she creates a language that crosses mediums and makes her work recognizable.

“And how I think of that is always being able to build a language within my work that is always indicative of my journey and the things that are important to me,” she said.

For the skirt, she used white silk, processed with black and red inks. The dress contains references to the sky and Osage philosophy.

“The dress represents the earth and being grounded. I always like to reference that Osage viewpoint of the divisions of Earth and Sky, because it can be interpreted so many ways, from a natural viewpoint,” she said. “To me it’s basic, it’s about balance and you can interpret that in all kinds of ways – male, female; good, bad, etc.”

The black and red-inked writing is purposefully distorted, to make reference to the distorted Osage history that is told to the community, which isn’t always from a point of view that is Osage. She also makes reference to women in the Osage creation story.

“I always use clothing for inspiration in my clay work. I make clay dresses, female figures that have dresses on,” she said. “I like that idea of transformation, especially as Osage people when we use our traditional clothing, that idea of transformation and understanding of where you come from and who you are when we are able to wear our Indian clothes it is very indicative of where we come from.”

Images from Osage ribbonwork, images from her grandmother’s handwriting, were transferred to the silk as background images. She said her grandmother kept detailed notes every day, sometimes on a calendar but mostly in stenographer notebooks. “My grandmother had really beautiful handwriting,” she said. She references it often in her work. There are also images from the Osage dictionary on the skirt. In the pocket of the skirt is a white painted elk, the central figure of the Osage creation story.

What My Heart Knows

“It was about loss, and people going on and basically it was just a symbol of emotions and I began thinking about ‘What My Heart Knows.’ Using that anatomical heart is a metaphor for what I believe to be true,” she said.

The heart is covered in her handmade stamps.

“I just have a need to make explorations and ask questions and I know that part of it is kind of questioning who I am, and you know, as an artist ... wanting to know, curiosity. And some of those are deep questions and some of them are not. But you’re searching all the time, searching to know something. Sometimes I don’t know what that is,” she said. “I have so many ideas that I can’t express them all. I keep a journal, a sketchbook. When I get an idea, I put it down in there.”

She said she always looks forward to the SFIM because it is a time to see lifelong friends who she wouldn’t see otherwise.

“I always have a good time there, I still get the feeling of when I get to Santa Fe, it’s a very unique place and very different from most places. The cultures that are there, the indigenous people that are there it has a – it’s a special place,” she said. “I enjoy that aspect of it. I enjoy arriving today just as much as I did when I arrived as a young person going to IAIA. I’ve made so many friends while I was in school and as an artist, and this is the only time of the year that I get to see them. It’s really an amazing experience.”

She is currently working with fellow artists on a book about Native American women artists, historic to present, that will be featured in museums around the country, including The Philbrook in Tulsa.