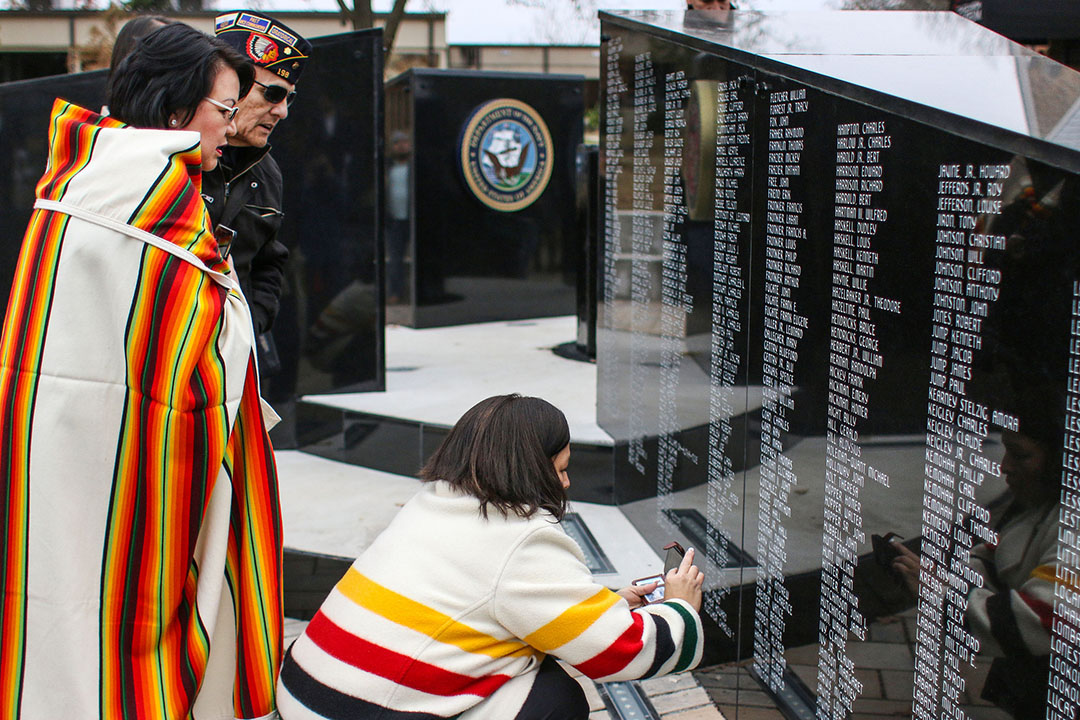 Those who visit the newly completed Osage Veterans Memorial will see approximately 1,200 names of Osages who served in the armed forces etched in the memorial’s granite walls in Pawhuska.

Also etched in granite: “This Memorial is dedicated to all Osage veterans and warriors… All gave some, but some gave all.”

Now open to the public, the Osage Veterans Memorial serves as a monument to honor the hundreds of Osage military veterans who made countless sacrifices and hard-working contributions in defense of the United States during times of war and peace.

Amid chilly morning temperatures, hundreds of individuals, including Osage veterans and their families, joined tribal officials, military dignitaries and the Osage Veterans Memorial Commission to dedicate and view the newly completed monument on Nov. 11 Veterans Day.

“This dedication ceremony is a time to set apart a particular place to honor and memorialize those veterans who served and have served our country in wartime and times of peace,” said Franklin McKinley, a Navy veteran and chairman of the Veterans Memorial Commission. “Our liberties and values stand safe today because of these brave men and women. We thank God for each and every one of them.”

On behalf of the VMC, McKinley expressed gratitude to the Nation’s government entities and contractors who worked on the planning and construction of the memorial with the five VMC members.

Located just footsteps from the Osage Nation Museum on the ON campus, the Osage Veterans Memorial is circular in size and comprises several granite walls with veterans’ names organized by military branch of service. The centerpiece of the memorial is an approximately 20-foot eagle feather sculpture with nighttime lighting for the memorial features, including its flagpoles for respective military branch flags.

In an ON Communications statement, Talee Redcorn, a project manager for the Nation’s Tribal Development and Land Acquisition Department and Army veteran, said the memorial stretches across 66 feet and extends four feet below ground. The memorial also contains waterfall features at the request of VMC member Frances Williams who “felt water was calming and that Osage warriors coming home could find a tranquil and peaceful place to reflect on their experiences,” the statement added.

Principal Chief Geoffrey Standing Bear said more veteran names will be added to the memorial each year as names are submitted. Standing Bear acknowledged and thanked the VMC members for their work on the memorial planning and building process.

“The Osage Veterans Memorial is a remarkable tribute to our Osage veterans who, along with the Osages currently serving in the armed forces, pledge to give the ultimate sacrifice to protect our freedoms and our way of life,” Standing Bear said at the dedication. “We cannot do enough to honor them. Congratulations to everyone and thank you veterans for your service.”

The ON Congress passed a 2011 law – sponsored by then-Congressman Standing Bear – establishing the Veterans Memorial Commission, which is charged with overseeing the construction and design activities of the memorial. During his first Principal Chief term, Standing Bear appointed McKinley and four other individuals to serve on the VMC, who were then confirmed by Congress. Serving on the VMC with McKinley are Richard Perrier (Air Force veteran), John Henry Mashunkashey (U.S. Marine veteran), Richard Luttrell (Army veteran) and Frances Williams who is president of the Hominy Chapter of American War Mothers, and president of the Oklahoma State War Mothers Association.

Per the VMC law, the Principal Chief and Congressional Speaker are ex-officio non-voting members of the commission, which included Congresswoman Angela Pratt, an Army veteran who served nearly two years as Speaker until this summer. Pratt also addressed the attendees at the dedication acknowledging the scores of current and former tribal officials and fellow Osages present, several of whom are veterans.

“My heart is bursting with pride to be in the presence of so many heroes of all walks of life,” said Pratt who spoke at the request of current Congressional Speaker RJ Walker. On behalf of Congress, Pratt thanked the VMC members and VMC coordinator Maria Deroin (Navy veteran) for their long hours of work on the memorial plans, noting “this was their vision and the rest of us followed behind to make their vision a reality … We are saying ‘thank you veterans for your sacrifice’ and thank you to the War Mothers and families who loved and supported them.”

Pratt also said: “American Indians have the highest rate of service in the armed forces per capita than any other ethnic group and have served with distinction in every major conflict for over 200 years and there are numerous Osage warriors among them and we have a long history of service and highly decorated servicemen and women and I know we are all proud to descend from the names that are on this wall. This memorial is our acknowledgment of their warrior spirit and service.”

In closing, Pratt added: “I’m thinking of our many brothers and sisters who can’t be here and share this day with us and I’d really like to see Gary Elsberry’s face right now in experiencing this honor, so I thank you very much, God bless you all.” Elsberry, a Vietnam War-era Army veteran and past Commander for the Pawhuska-based Harold Bigheart Smalley American Legion Post 198, passed away in 2014. Elsberry was one of several Osage veterans who lobbied tribal government officials for a memorial during the 2006 reformed Osage Nation government’s earlier years.

At the Veterans Memorial Commission’s request, Oklahoma Army National Guard Brigadier Gen. Louis Wilham served as the keynote speaker for the dedication event. In his prepared remarks, Wilham, who also serves as the Assistant Adjutant General for the OANG, briefly acknowledged several famous people who are military veterans, including Osage Army Maj. Gen. Clarence L. Tinker, who was the first American general killed in action in 1942 during World War II.

Wilham referred to Tinker as “the warrior of the sky,” noting the Air Force Base near Oklahoma City now bears his name and has provided hundreds of thousands of jobs for Oklahomans since the air depot’s renaming as Tinker Air Force Base in 1942. Tinker’s name, like Elsberry’s, is among the hundreds listed on the monument with other fellow Osage veterans.

Other names include the current four VMC members who are veterans, Redcorn and other family members including Army veteran Andrew “Buddy” Redcorn who passed away in 2009. Buddy Redcorn was the most highly decorated Native American of the Vietnam War, according to the book, “The Deaths of Sybil Bolton” written by Osage author and Army veteran Denny McAuliffe.

Wilham acknowledged several other Native American contributions to military defense efforts including the Osage Code Talkers who served during World War I as part of a military program where enlisted Native American soldiers communicated with each other in their respective languages via radio so the wartime enemies could not decipher the language code if the communications were intercepted.

In his remarks, Wilham noted the VMC’s Luttrell served as a Captain of the 45th Infantry Division during the Korean War, adding Luttrell was also assigned to the 180th Infantry where he commanded nearly 300 men, including several fellow Native American soldiers.

“I expect this monument will be a site of many, many future ceremonies and services for years to come and it has been my true pleasure to be able to speak at the first of these celebrations,” Wilham said.

The dedication included a 21-gun salute and an 11 a.m. flag raising conducted by veterans from Post 198. Vann Bighorse, director of the Osage Language Department, sang a flag song and Osage Congressman John Maker (Army veteran) delivered the event prayer in the Osage language. Williams cut a ribbon to conclude the dedication ceremony and the public started viewing the monument afterward.

McKinley thanked the various entities who worked on the monument project including the ON Roads Department and Tribal Development and Land Acquisition Office, as well as contractors Builders Unlimited Inc., Pryse Monument, Wallace Engineering and R+K Studio.

In closing, McKinley said: “I would like to encourage everyone to come and sit or just talk around the memorial to consume the spirit of this place … We are surrounded by the spirits of those who made the ultimate sacrifice. Whether you’re related to someone whose name is placed here or not, you can share in the kinship of being an Osage and an American citizen.

“We dedicate this site as a sacred place for our Osage veterans and all veterans where veterans from all walks of life can come and visit, come to connect, come to share their stories.