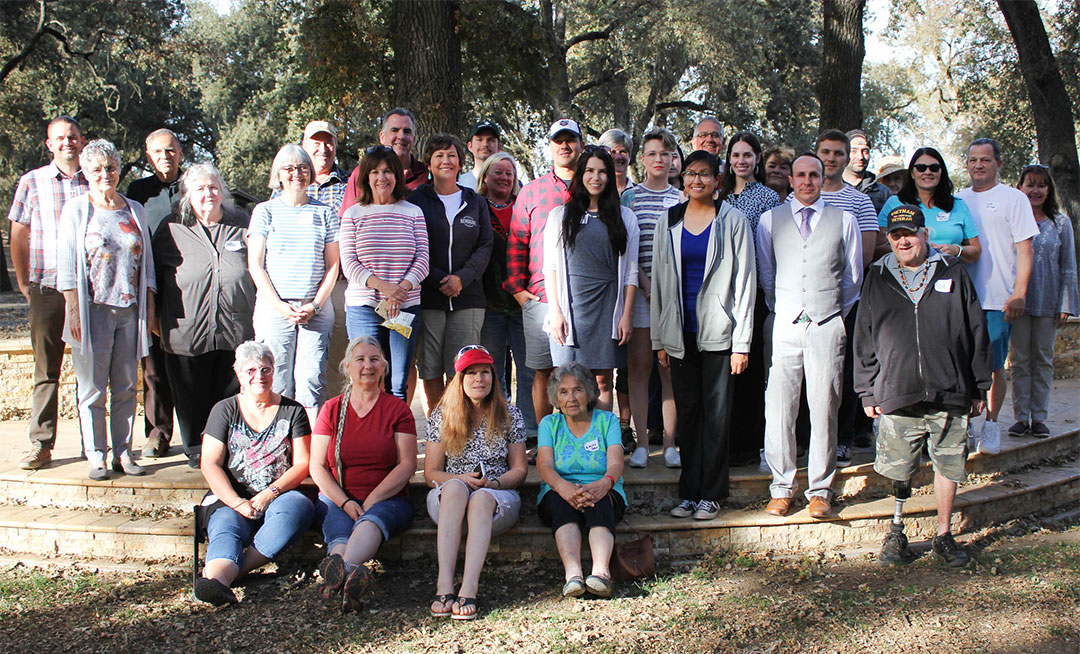 On Nov. 4, over 50 people including Osages, their families and government officials from Oklahoma attended the annual fall gathering held at the park, which featured culture and history presentations.

NCO steering committee member Keir Johnson-Reyes said the committee is “very appreciative of everyone’s time and efforts to come and share in our community gathering, especially those traveling from Oklahoma.”

Osage graphic artist Ryan RedCorn, who is based in Pawhuska, attended the NCO gathering while in the area for other business, including teaching a photography training in nearby Sacramento. RedCorn discussed some of his recent work, which included inviting various Osage women and girls to pose for photo portraits while dressed in their traditional Osage clothes.

RedCorn said Oklahoma Today magazine contacted him about writing an article and photos. He responded with a photo shoot that “allowed Osage women to have full control over what was going to happen with their image. I reached out to a bunch of people that I know – I tried to be even about who/ which districts to spread it around and collaborated with different Osage women to take those photographs and they were published and people liked them.”

RedCorn referred to the screenplay-in-development of Killers of the Flower Moon: The Osage Murders and the Birth of the FBI, which is based off the bestselling novel by David Grann. RedCorn expressed concern the film will focus heavily on the Osage Reign of Terror murders, which has the potential to not entirely match the stories Osages have passed on, especially those who survived that era.

RedCorn addressed the dark history photographs of Osage women during the Reign of Terror years in a November 2018 Washington Post perspective article. He wrote: “Like many Americans, Osage women in Oklahoma in the early 1900s loved to put on their best clothes and have their portraits taken. The photos were a nice gift for family or descendants and an expression of self-respect that attacked prevailing American attitudes about Indigenous people. But the practice quickly went bad… Portraits of Osage women like these were created by local photographers. Merchants would sell the photos to white men to track down wealthy Osage women. They would proceed to court and marry an Osage, then kill her relatives so she would receive an inheritance – and then kill her too.”

“Most of the (Killers of the Flower Moon) writing and most of the way people talk about this time period, it focuses on the murder part, the FBI part, and I think this is a real problem,” RedCorn told the NCO attendees. “It’s a huge problem because it puts an incredible amount of focus on people who are not with us anymore, which isn’t bad, but if that’s the narrative you’re retelling over and over again from an Osage perspective, it gets entirely problematic because – as an Osage child – I was not hearing stories about people being murdered all the time.”

“If you’re a quality Osage grandparent or quality Osage parent, you’re not sitting there telling (children) over and over again ‘well yeah, your people were murdered’… I’m not saying we shouldn’t say that or know our own history, but what is lacking in the way that those stories are told is the value we can place on the people who survived that time period and came out on the other side,” RedCorn said. “What lessons did they learn? How did they carry on? How did they put things together? What was it about that they were given from their grandparents to allow them to persist through that time period and thrive on the other side? I think those lessons are key … I think it’s important as Osage people that we lay it hard on survivorship and not victimship.”

For his photo project, RedCorn also writes in the Washington Post: “My collaborative approach for these portraits respects the person, the space, the voice and the time the photo is being taken. Through this lens, these women’s voices and values emerge. These values have always been central to the Osage community. They carry them with respect, generosity, fairness, adaptation, prayer and humor.”

Also at the NCO gathering, attendee Chelsea Bryan talked about connecting with Osage heritage. She spoke with Wah-Zha-Zhi Cultural Center Director Addie Hudgins about culture support, which she used to lead small group discussions at the gathering.

“I guided small group discussions where NCO attendees shared about why they were there/what their Osage heritage means to them and then had people reflect by writing on notecards what Wah-Zha-Zhe stuff they want to learn and what their barriers are in doing that. My goal was a presentation encouraging learning as a responsibility,” Bryan said.

Attendee Aimee Inglis shared her recent experience in coming to Oklahoma for the 2018 WCC Osage Encampment held at the Osage Nation’s Bluestem Ranch west of Pawhuska. ON Congresswoman Shannon Edwards also attended the event and delivered a similar history and education presentation as she did during the Nov. 3 United Osages of Southern California gathering held the day earlier in Carlsbad.

Mark Pearson of the Osage Language Department discussed the Osage language’s online presence, which includes the language learning app released in 2017. The app is available for Android or Apple devices by searching and downloading “Wahzhazhe” with the ON seal.

The gathering included a lunch, which included bison chili and also meatpies made by Charles and Kimberly Maker. Later in the afternoon, the attendees joined WCC specialist Vanessa Moore for a cultural activity in beading rosettes for moccasins.

Johnson-Reyes added: “(The Makers), Melani King, Sarah Boyle, Karen Elliott, Bryan, Inglis, and Duane BigEagle all assisted behind the scenes to help the event flow smoothly. I am honored to work with so many Osages committed to building unity and furthering relationships with our greater Osage community! I personally enjoyed spending time with some of the Osages from Oklahoma; driving folks to the airport or grabbing a meal together - the unstructured time really offered great opportunity to connect and share some meaningful time together.” Johnson-Reyes also thanked the Osage Foundation for supporting the NCO’s recent purchase of audio/visual equipment for a flatscreen TV monitor for slideshow/ video presentations.

Following the NCO gathering, attendee Carol Arata thanked the NCO planners in a Facebook post for the event. “Thank you to the planning committee for a wonderful day. We appreciate the time and energy you put into organizing this event - everyone enjoyed the food and the guest speakers! Great learning and fellowship. Thank you to those who came from Oklahoma to share your knowledge with us!”