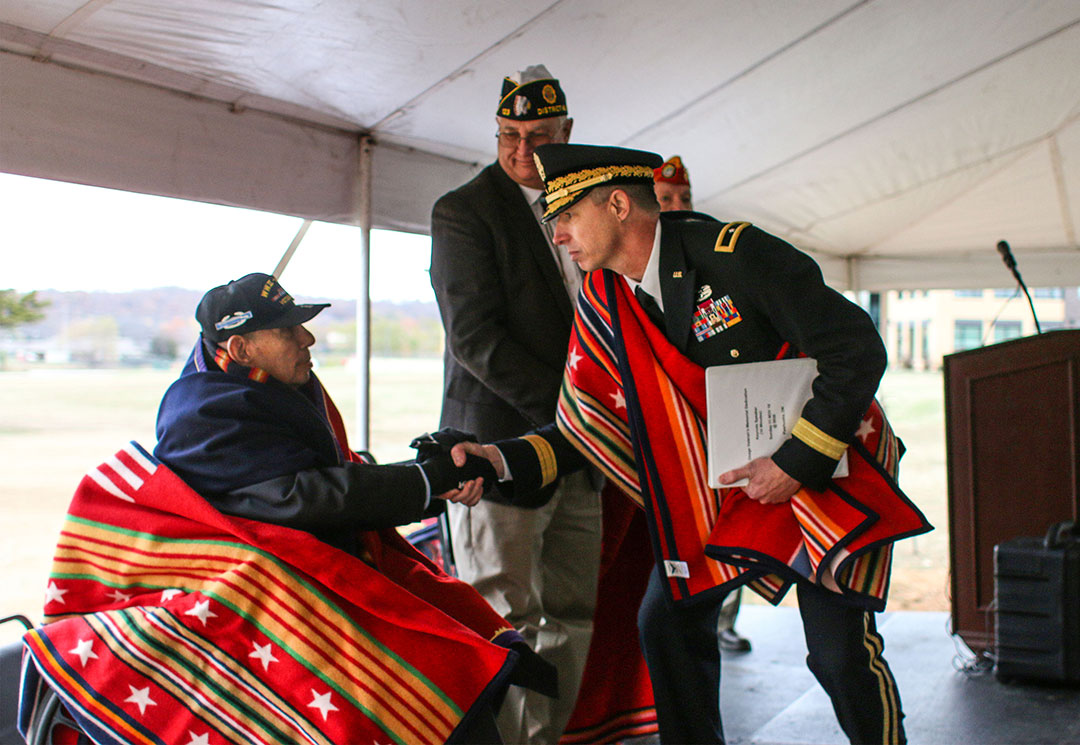 The five members each selected one individual who was honored with a blanket one-by-one. Maria DeRoin, the VMC communications coordinator and U.S. Navy veteran, called the five veterans up to receive the blankets and read aloud a brief biography of the individuals’ military service.

John Henry Mashunkashey honored U.S. Navy veteran Charles Lookout Jr. who served in the Pacific Theater during World War II. Lookout was stationed aboard the U.S.S. Saratoga CV-3 and was involved in nine island operations, including Iwo Jima, and Okinawa.

Frances Williams honored fellow VMC member and Army veteran Richard Luttrell, who graduated from the Oklahoma Military Academy with honors before joining the armed forces. Luttrell served during WWII where he was trained as a rifleman and later promoted to Captain of the U.S. Infantry. After WWII, Luttrell joined the National Guard and was deployed to the Korean War. He served with many infantry units as a squad leader, platoon sergeant/ leader and commanding officer and was a captain at the time of his honorable discharge following 12 years of service.

Richard Perrier honored Osage Congresswoman and Army veteran Angela Pratt who served as a 14T/ Patriot Missile Crewmember. Pratt graduated from Advanced Individual Training as an overall fitness soldier and was deployed overseas. Pratt is the recipient of several awards including the Army Achievement Medal, Army Good Conduct Medal, and the Armed Forces Expeditionary Medal, Army service medal in sharpshooters and marksmanship before her honorable discharge.

Richard Luttrell honored Army veteran and former Osage Tribal Councilman John Williams Sr. who enlisted in 1967 and later volunteered for Special Forces and served overseas, including Vietnam. He received training in combat engineering, airborne training and Special Forces medical training. Williams was assigned to the 5th Special Force group providing medical treatment and earned sergeant rank while in the Army. After returning to the United States, Williams completed the Indian Health Service Physician Assistant Program and saw patients at several IHS facilities including facilities on the Havasupai and Tohono O’odham reservations in Arizona and administrator posts at Winnebago (Neb.) and the former Pawhuska IHS Clinic before retiring after 35 years of federal government service.

At the time of the dedication, about 1,200 Osage veteran names were inscribed on the Osage Veterans Memorial. Principal Chief Geoffrey Standing Bear told attendees there are plans to add more names in future years as they are submitted.

The Osage Veterans Memorial Commission keeps a Facebook page with photos and information regarding the memorial. The VMC noted John Henry Mashunkashey, McKinley and Mashunkashey’s son, Ross Mashunkashey (Navy veteran), blessed the memorial at sunrise before the 11 a.m. dedication started. After the event, many of the attendees and their families attended the annual Veterans Day Dance hosted by the Hominy Chapter of American War Mothers at the ON Civic Center that afternoon.