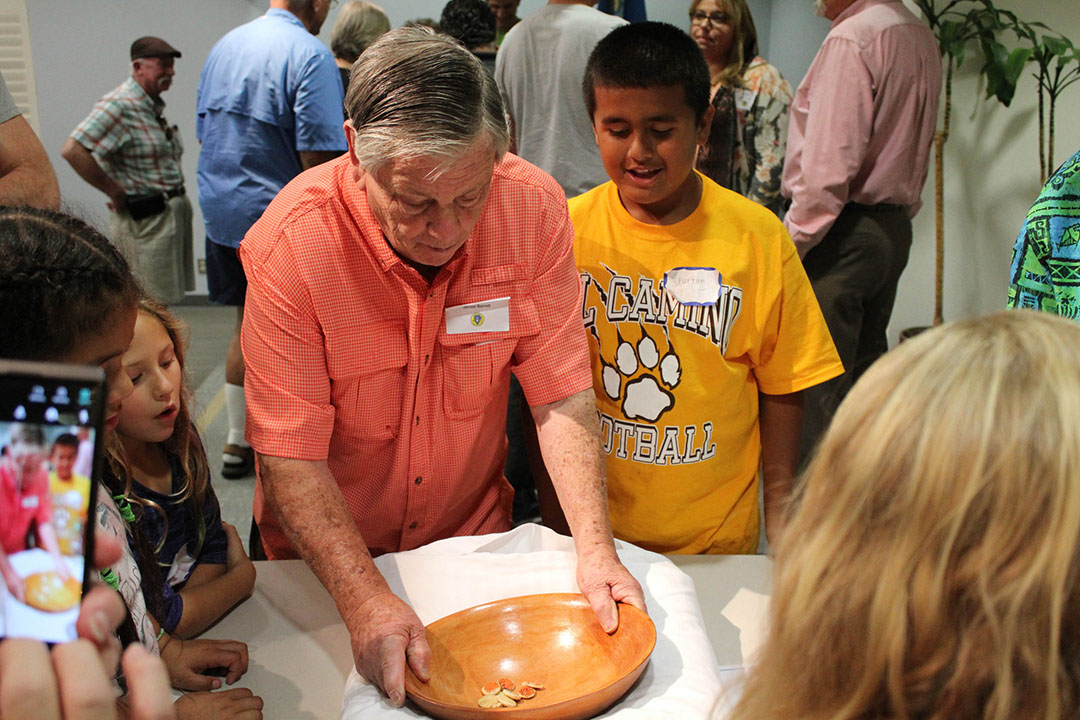 CARLSBAD, Calif. – Osages and their families enjoyed a Saturday filled with fellowship and learning more information about the Nation during the Nov. 3 United Osages of Southern California fall gathering.

The day-long event took place at the Carlsbad Senior Center where scores of attendees gathered to meet with Osage Nation tribal officials visiting from Oklahoma. According to UOSC Chairman Greg Clavier, over 90 people signed in with 65 identifying as Osage tribal members living in California.

As in past years, the UOSC gathering opened with attendees reciting the Pledge of Allegiance led by former UOSC Chairman and U.S. Marine veteran Bill Myers. Osage language instructor Chris Cote delivered an Osage prayer for the event.

“It’s a huge event for those of us that came in four years ago … seeing these new programs working together,” Standing Bear said referring to 2014 when he started his first term as Principal Chief.

On the recently-opened Osage Veterans Memorial, Standing Bear said there are 1,237 Osage veterans’ names inscribed on the memorial’s granite walls, which are divided up by respective military branches around the nearly 20-foot metal feather statue on the monument. He encouraged attendees to get in contact with the Osage Veterans Commission if their names or names of veteran relatives are not on the wall to have their names added to the memorial paying tribute to all veterans who serve in both wartime and peace.

Standing Bear noted the Visitors Center (recently opened) is not intended to replace other cultural entities including the ON Museum. “It is a place where all this traffic is coming in and out of Pawhuska because of the Ree Drummond/ Pioneer Woman phenomenon. We can intercept some of that (visitor traffic) and have them come into the visitors center where they will see Osages telling our story our way.”

As of the last report on Osage membership, Standing Bear said there are just under 21,500 Osages who are descended from the 2,229 original allottees. He said there are over 1,600 residing in California, and about 2,100 in Texas and about half the population is in Oklahoma.

For spending in the tribal government, Standing Bear said the Nation is spending $8.1 million for higher education scholarships in fiscal year 2019 and $9.75 million for the health benefit programs. For the Osage Language Immersion School, Standing Bear said the school’s budget is $1.2 million, the Language Department’s budget is $1.5 million and the Wah-Zha-Zhi Early Learning Academy is receiving just under $3 million.

Standing Bear also applauded the progress of the language program in helping preserve and carrying on knowledge of the language, especially among school-age children. “In two generations, I’ve not heard our language as I’ve heard it today … Given our limited amount of funds, I believe (investing in future) is through you because that child there is only the present – that’s 50 years of the future.”

In closing, Standing Bear noted efforts to pass the annual tribal budgets are made through working together with the ON Congress, who considers and passes the budgets during each Tzi-Zho Session held in the fall. “We’re doing everything we can now to make sure our children, your children, grandchildren and those of the future will know what it means to be Osage.”

Osage Casino CEO Byron Bighorse shared some highlights of the Nation’s newest gaming property, which is the Tulsa casino and hotel. “I’m proud to say we’ve never made more money than we have under the last 4.5 to five years, so we are on a great path financially,” he said.

On the $160 million casino’s Aug. 29 opening day, Bighorse said over 6,000 people came to the Tulsa casino with traffic backed up all the way to downtown, which is approximately five miles.

As for future amenities, Bighorse said construction continues on the approximately 2,000-seat Skyline Event Center, which is expected to be completed in January and open to hosting events in February.

“I do think it’s important to us to continue to learn about our history,” Edwards said. “We know most Indian tribes have oral histories and ours is no exception, what I’m concerned about is when we go forward and start changing history and I know you guys know how that works. I know how it works because for example, when I was in middle school, I would read a book (about Oklahoma history) and it didn’t really have anything about Indians in it and I thought how could this be possible? And then the stories that it told were not accurate. So I want to make sure us as a people understand our heritage, understand our history and learn from them and go forward.”

Another example Edwards referenced came from the Osage’s 1881 Constitution, which states there are five Osage districts. “While we may have three districts today, don’t forget we actually had five districts back in the 1880s.”

Edwards presented a slideshow showcasing old photographs along with journal passages written by a non-Osage woman passing through present-day Osage County who described her recollections and thoughts about seeing Osages and their daily lifestyle practices at the time.

The writings by Mrs. Frank C. Churchill are compiled into a collection titled “A Few Feeble Remarks,” which are archived with the Smithsonian’s National Museum of the American Indian. Edwards noted the importance of receiving an education and used the presentation to also discuss the Nation’s spending on education.

According to recent numbers, Edwards said the Nation spends an average of about $6,900 per student receiving a higher education scholarship and 1,173 Osages received funding during the 2017-2018 school year.

Edwards listed the various education assistance opportunities available to all Osages, which include tutoring, career technology financial assistance and college entrance assistance. “Make sure you know about these and tell your kids, your grandkids or yourself to look into taking advantage of this.”

Los Angeles area resident and Pawhuska native Danielle Glenn-Rivera informed the UOSC attendees of the three-week Bovard Scholars program offered by the University of Southern California for high school junior students to come to the campus to learn about college.

According to a USC EdSource article, the Bovard Scholars Program is an all-expenses-paid educational opportunity for low-income students to introduce them to college life. The next deadline to apply is Feb. 15, 2019 and more information can be found at: https://bovardscholars.usc.edu/