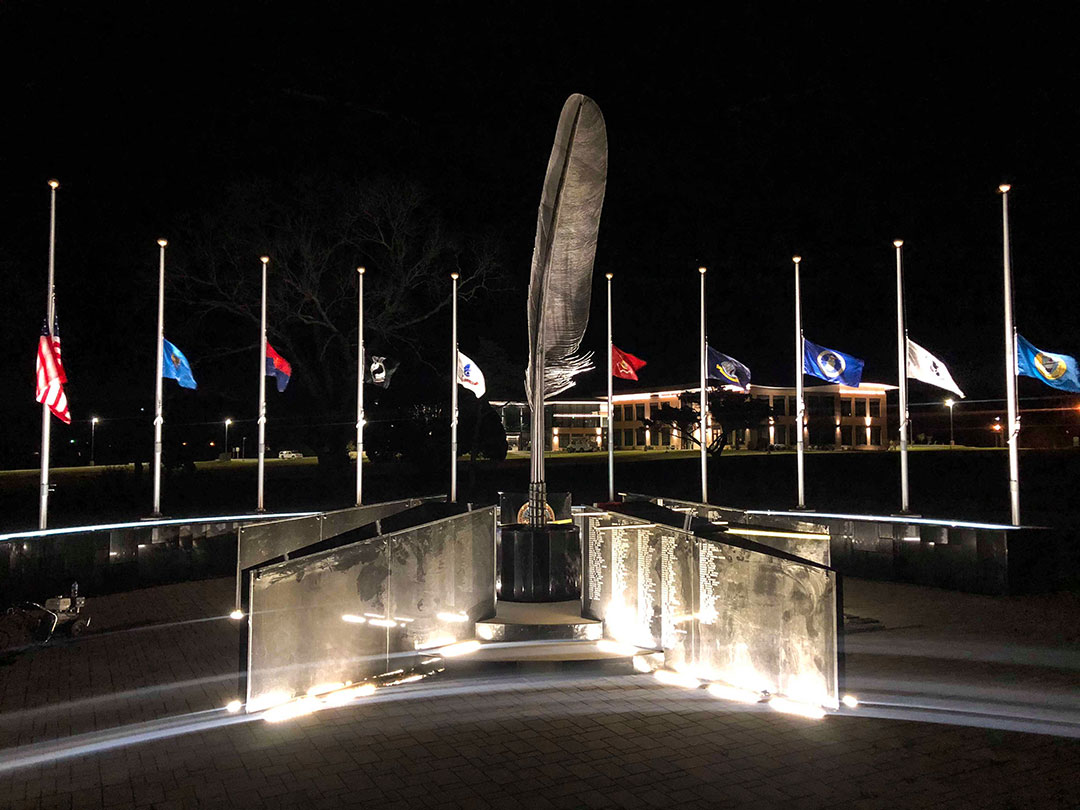 -       Dr. Ron Shaw accepted a new post at the Wah-Zha-Zhi Health Center as its new CEO and Chief Medical Officer and gave an update on construction plans for a new facility.

-       Dr. Ron Shaw resigns from the Fifth Osage Nation Congress to accept a new post at the Wah-Zha-Zhi Health Center as its new CEO and Chief Medical Officer.

-       Imperative Entertainment, which bought the rights to David Grann’s bestseller “Killers of the Flower Moon: The Osage Indian murders and the birth of the FBI,” toured the Osage reservation with the Nation’s ambassadors. They toured the three Villages, met with Osage elders in Fairfax for interviews and were guests of honor at an Osage meal.

-       The Stillwater Public Library held events highlighting the Osage Nation for a month and invited many citizens from the Nation to speak and give presentations.

Another wind project may be on the horizon for Osage County

-       Pitched as the second largest wind energy project in the world, Wind Catcher Energy Connection is a joint effort among Chicago-based Invenergy, Southwestern Electric Power Company and the Public Service Company of Oklahoma.

-       A group of organizers led by Dr. Moira RedCorn put on a weekend event that included a tea and dance to honor Osage women and girls in Pawhuska.

-       Osage citizen David Holt is the first Native American to be elected Mayor of Oklahoma City in its 129-year history.

-       Despite an 11th-hour veto threat, a 2018 federal budget is now in place that largely spares Indian Country from drastic budget cuts.

-       There are 14 Osage shareholders who filed for candidacy to run for Osage Minerals Council in the June 4 OMC election.

Wind companies appeal to U.S. Supreme Court after 10th Circuit rules in favor of the Osage

-       A 10th Circuit Court decision that opened the door for the Osage Minerals Council to potentially pursue damages from wind farm work is being challenged yet again.

-       Construction crews were hard at work on the new Hominy Village Square on March 14. The Hominy District will be dancing under a new arbor and congregating in a new community building this June.

-       Eddie Streater, Regional Director for the Bureau of Indian Affairs, Eastern Oklahoma Region, has denied the Osage County Commissioners’ appeal to the Osage Nation’s application for fee-to-trust on 75 acres in north Tulsa.

-       The Oklahoma Senate signed off on legislation to expand tribal gaming.

-       Since the age of 5, Tylen Edwards has been wrestling boys to the ground. It makes sense because her father is a former Oklahoma State University wrestler and her mother a College basketball player, but neither parent could predict their youngest of six children would be the 2018 Girls Flo Reno World Champion at the age of 10.

Osage Congress to consider the dissolution of Osage and Tallgrass LLCs

-       The Fifth Osage Nation Congress called itself into a 12th Special Session to consider the dissolution of the Osage LLC and Tallgrass Economic Development LLC, and a possible $700,000 appropriation to hire an agent to carry out the dissolution.

-       Principal Chief Geoffrey Standing Bear signed a warranty deed to place the Tulsa Back 75 acres of the Nation’s land into trust on June 13. The land is located adjacent to the Nation’s new casino in north Tulsa. The signing comes after the Osage County Commissioners appealed the Nation’s trust application, citing a harmful reduction in ad valorem taxes to the county.

-       On June 6, Osage veterans, government officials and contractors broke ground on the site of the Osage Veterans Memorial. The memorial is located adjacent to the Osage Nation Museum on the ON campus.

-       Inauguration Day was held July 14 at the Osage Casino in Ponca City. Government officials from all three branches and the Fourth Osage Minerals Council all took their oaths of office. The Osage Language Immersion School students said the invocation for the event in the Osage language and Andrew Cote performed an original piano composition for the officials.

Standing Bear makes address at Inauguration adding ‘We can do more’

-       In his second inauguration speech to the Osage Nation and community members, re-elected Principal Chief Geoffrey Standing Bear lauded the Nation’s government history and recognized several entities that supported the accomplishments made during his administration’s first term in office.

-       Families and friends honored and celebrated the first class of the Osage Nation Educational Leadership Academy at their graduation on July 8. Each graduate received their Master of Science in Education Leadership from Kansas State University. The partnership is a first for a federally recognized tribe and a major university.

RJ Walker elected as ON Congressional Speaker by colleagues

-       The Fourth Osage Minerals Council took their oaths of office on July 2 in the council chambers on the Osage Nation Campus, ahead of the Nation’s Inauguration Day. Councilwoman Marsha Harlan was elected to serve as chair.

At last, the new Osage Casino & Hotel opens in Tulsa

Tribes not buying in to potential Department of Interior reorganization

Community comes out to honor the Nation’s remaining Full Bloods

-       To see the finished sculpture of famed Osage Prima Ballerina Maria Tallchief standing in front of the Tall Chief Theatre, one takes in the intricate detail put into the sculpture and the beauty of the wood that carves out her face. The sculpture was made by Michael Lynn over a period of about 10 days by chainsaw and other carving tools.

-       A proposed reorganization at the Department of Interior will go forward – but without three agencies that have an Osage County footprint. During the Sept. 19 Osage Minerals Council meeting, Pawhuska Agency Superintendent Robin Phillips announced that her office was notified that it, along with the rest of the BIA, the Office of the Special Trustee for American Indians and the BIE were exempted from an overhaul of regional boundaries used by agencies under the DOI.

-       The Sixth Osage Nation Congress has appropriated $9.75 million for the Health Benefit Plan Fund for the upcoming year, the most money ever appropriated to the fund since its inception in 2008.

-       Although Oklahoma Osages will soon be able to legally purchase medical marijuana, accessing it may take a little extra effort. In June, Oklahoma voters approved a ballot measure to allow residents to legally grow, possess and use marijuana for medicinal purposes.

-       The Grayhorse Village will receive a new community building as early as 2020 after the Sixth Osage Nation Congress voted unanimously on Sept. 21 to appropriate $1.1 million toward additional building costs for a new structure.

Unease as Hollywood tackles the Osage Reign of Terror

-       Martin Scorsese and Leonardo DiCaprio officially signed on to direct and star in the film adaption of David Grann’s bestselling novel, “Killers of the Flower Moon: The Osage Murders and the Birth of the FBI.” However, many Osage question whether the film will do justice to the Osage story.

-       The Osage Nation’s Bluestem Ranch LLC Board acquired a second shipment of bison, which were shipped to the 43,000-acre ranch southwest of Pawhuska on Oct. 2. That day, 5q bison arrived via tractor-trailer at the ranch from the U.S. Fish and Wildlife Service’s herd in southern Oklahoma.

-       At a 15-minute special meeting on Oct. 12, the council voted 5-3 to name Everett Waller as its new chair. Waller previously served as chairman of the Third Osage Minerals Council. The move came after Councilwoman Marsha Harlan tendered her resignation as chairwoman earlier in the week, citing an ongoing personality conflict with another council member.

-       The Wah-Zha-Zhi Health Center now provides medical referrals for diagnosis and treatment beyond provided clinic services. This service is called Purchase Referred Care and it takes the place of the Pawnee Health Benefit package.

-       Those who visit the newly completed Osage Veterans Memorial will see approximately 1,200 names of Osages who served in the armed forces etched in the memorial’s granite walls in Pawhuska. The names are placed according to the military branch in which they served.

-       On Nov. 4, over 50 people including Osages, their families and government officials from Oklahoma attended the annual fall gathering held at the park, which featured culture and history presentations.

-       An Osage student-athlete is taking her talents to the University of Oklahoma next year. On Nov. 15, Owasso softball standout Riley Boone signed a letter of intent with the Lady Sooners on the first day of the NCAA’s early signing period.

-       With the 2018 holiday season starting, the Osage Nation opened its Visitors Center on Nov. 16 to greet Pawhuska visitors and to offer an information outlet to the public on the Nation from the Osage perspective.

-        Osages and their families enjoyed a Saturday filled with fellowship and learning more information about the Nation during the Nov. 3 United Osages of Southern California fall gathering. The day-long event took place at the Carlsbad Senior Center where scores of attendees gathered to meet with Osage Nation tribal officials visiting from Oklahoma.