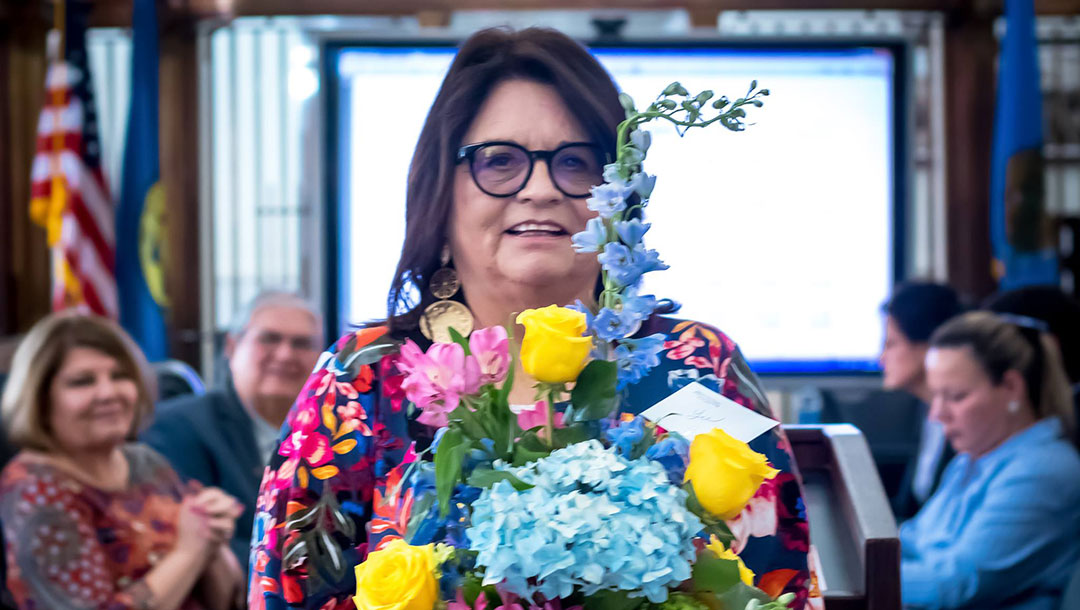 Photo caption: Lee Collins was honored by the Osage Nation Congress on Sept. 13 for her years of service to the Osage Nation as director of the Social Services department. ON Communications/Cody Hammer

Collins retired from the Social Services department in October after 14 years as director.

“I have worked with Lee at the Osage Nation Social Services since December 2010. I’ve been in the Child Welfare field since 1997,” said Jenny Buffalohead, Foster Care Specialist for the ON Social Services department. “I have worked for some very outstanding staff in the Child Welfare field throughout my years in Oklahoma and California and Lee is one of the best directors I have worked for. She represented the Osage Nation very compassionately, professionally and was very dedicated in all aspects of her work.”

Receiving the Richard Poweshiek Award recognizes that Collins has demonstrated an outstanding commitment and dedication to the tenets of the Indian Child Welfare Act, according to the OICWA website. Criteria to be considered include: distinction in the field of Indian child welfare, advocacy toward Indian children and their families, knowledge and proficiency of ICWA in its application in state courts, demonstrated leadership in promoting communication between state, private, community, and tribal agencies, and forming successful working relationships within the communities they serve.

Collins began her child welfare career with the Oklahoma Department of Human Services in 1995. She was a Child Welfare Specialist from 1995-1998, at which time she became a Child Welfare Supervisor for OKDHS and continued in that capacity until 2002. From 2002-2004, Collins conducted home studies in Osage County. In 2004, she became the director of Osage Nation Social Services.

According to a news release, Collins helped the Nation’s Social Services office achieve many accomplishments over the years: