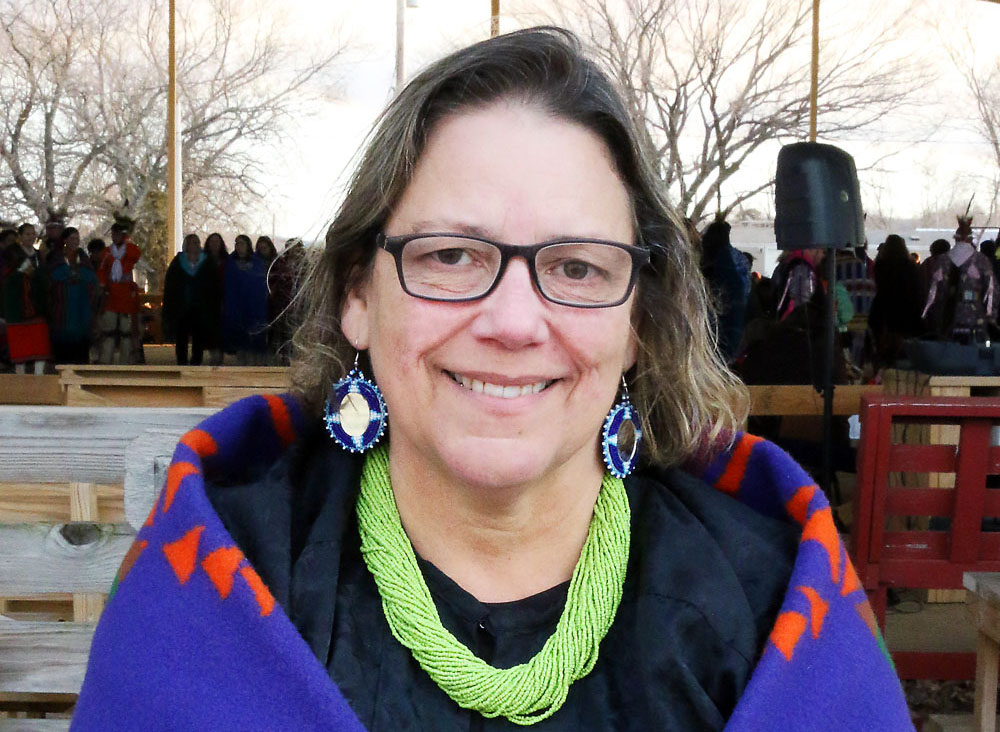 Some mornings lately the sky has shown pink behind the dark branches of alders along the dike. I’ve been awake early enough to see the morning star, bright as a glowing jewel beside a crescent moon. These are everyday blessings. I received many gifts in 2018, and I’m counting difficult times that brought family and friends closer together. It’s been a year to visit and deepen friendships, as well as meet people who feel like they’ve always been part of my life in the Osage world and beyond.

I discovered new authors, falling in love with Our Tents are Small Volcanoes, a chapbook by Sámi-American poet Vivian Faith Prescott that conveys the way indigenous language brings us home. It reminded me of the way that studying Osage takes us deep into place and belonging. Finding new authors is like watching Osage artists and artisans work, as they interpret their vision in jewelry and clothing, paintings, sculptures that celebrate who we are.

I traveled with my spouse in Oklahoma and further west this fall. We saw the Grand Canyon together, the night sky and those stars. We visited a steam railroad maintenance facility in Ely, Nevada—this is my husband’s hobby—where a rangy formerly feral cat greets all visitors. Named Dirt for the soot that won’t come off his paws, the yellow and white cat is idolized by a crew of some 40 workers.

On the last day of 2017, I went to visit a local family who has adopted and been adopted by a young porcupine. Edgar Alan Poke is about seven months old now. He appeared at Meg Blackburn’s home in June, sitting on a rock on the wooded hillside near the driveway. Blackburn lives with her husband and young children in a house built on a narrow bench surrounded by forests of second and third growth Douglas Fir trees, cedar, alders and Sitka spruce on a 600-foot ridge along the Columbia. For years we’ve walked along Abe Creek to the top of the ridge where elk herds sneak around. There are whitetail deer, coyotes, occasionally sign of bear and very rarely cougar.

Blackburn believes Edgar was about five or six weeks old when she first saw him. He watched the family and began to move up their driveway day by day until he sat on their doorstep. It’s likely his mother was killed on a nearby highway when she crossed to get water at the river.

After seeing his picture in our local newspaper, I wanted to meet Edgar. Osages used quills before beads were available, and, of course, the porcupine roach with its eagle feather is emblematic of the In-Lon-Schka. Although Edgar is adorable in his pictures, a small hairy character with paws lost in long hair, I kept reminding myself I shouldn’t assume he’d be comfortable with me. When you hear porcupine, you think danger and imagine dog snouts speckled by quills, but the image of him with his hands on Blackburn’s cheeks compelled me to visit.

He’s a wild animal, and Blackburn tries to respect that. She left food for him when he first appeared, but she didn’t handle him. She says she waited for him to make the first move. One day, he crawled into her lap, reached up and grabbed her cheeks and sniffed her lips and nose. That’s the picture that melted my heart and made me ask to visit.

The house sits at the top of a steep driveway, and while I walked uphill, I saw Blackburn, her daughter, Birdie, and a grey-brown animal walking back and forth at their feet. Edgar is furry with miscellaneous longer white hairs, dark eyes and a sort of square nose. He walks a little bow-legged. His rounded ears remind me of a Koala bear: he’s that cute.

He walked up to me, sniffed my pants and let me pet his head. He sniffed my hands and took them in his own, long claws curled alongside my fingers. He ate a carrot. His hair is dense and soft, but you don’t want to pet him against the grain. He looked like he would have crawled onto my lap when I sat down, and if I’d known how he liked to be picked up, I’d have helped him. I petted the fur on his broad belly, which has no quills to worry about.

We started off for a walk, and he followed. He investigated a culvert. He has a cage that’s rainproof and is usually left open, but can be closed so the chickens don’t eat all of his food. He gets rabbit food and fruit and vegetables, has hay for bedding, and a shelf that he can curl under.

Blackburn says if she’d known how much he liked to snuggle, she would have touched him sooner. She’s trying to help him learn to climb trees. She says he gets about four feet off the ground before he gets anxious. Porcupines usually stay with their mother for the first 18 months, and she’s trying to be a bridge until he can be on his own. He spends a lot of time wrapped around her calf, but he’s becoming more independent, going into the woods and staying away for longer periods. Blackburn admits to worrying about him while he’s gone.