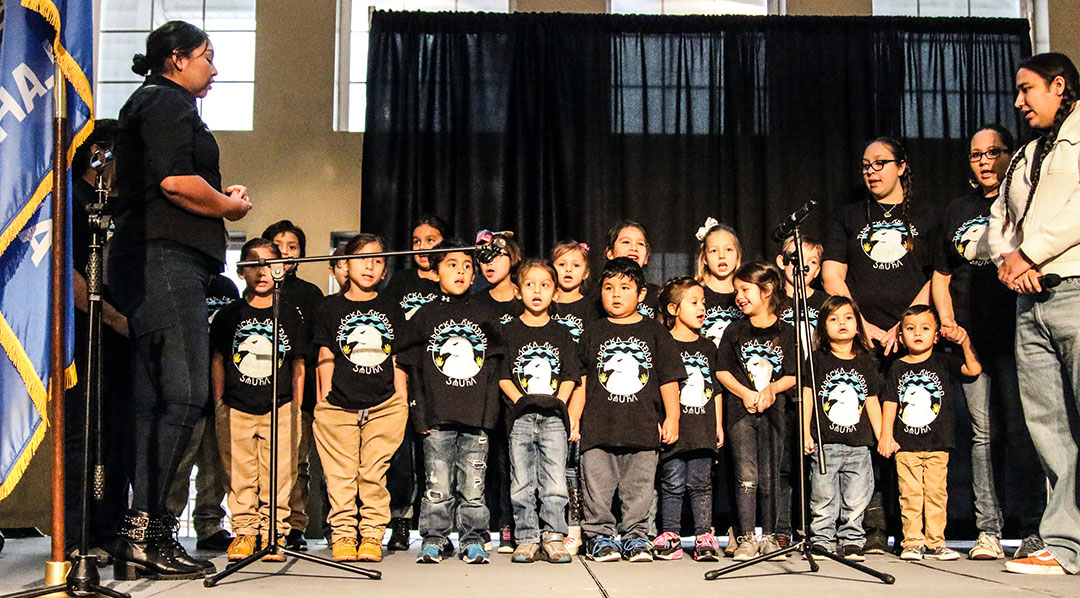 Photo caption: Students from the Osage Language Immersion School said the invocation to start the Scissortail Children's Festival at the Oklahoma Aquarium in Jenks on Jan. 12. SHANNON SHAW DUTY/Osage News

Both the Osage Language Immersion School and youth with Dance Maker Academy were among the groups on the agenda for the Scissortail Children’s Festival on Jan. 12 at the Oklahoma Aquarium.

Gov. Kevin Stitt and his family hosted the child-oriented event as part of a weekend’s worth of celebrations leading up to the Jan. 14 swearing-in ceremony for Stitt and other executive branch officials elected in 2018. Ticket proceeds from the event were donated to four Oklahoma-based non-profit organizations that primarily work with families and at-risk youth.

Students from Daposka Ahnkodapi recited the Lord’s Prayer in Osage before about 300 people at the Oklahoma Aquarium to officially open the event.

“When we start anything, prayer always comes first,” Daposka Ahnkodapi teacher Christopher Cote said to the crowd. “We want our children to start things properly, so that means starting a new year and new administration with prayer.”

Along with his two brothers, Henry Pratt was among the immersion students who prayed on stage. He said he was not intimidated to speak in front of the hundreds of people packed into the Oklahoma Aquarium’s foyer.

In addition to the prayer, students with Dance Maker Academy performed a portion of “Wah-Zha-Zhe: an Osage Ballet.”

Like the immersion school students, the youth in the ballet troupe said they did not find out about the invitation until less than a week before the event. However, unlike the immersion students, who had previously learned the Lord’s Prayer, the dancers were performing a selection that was new to them.