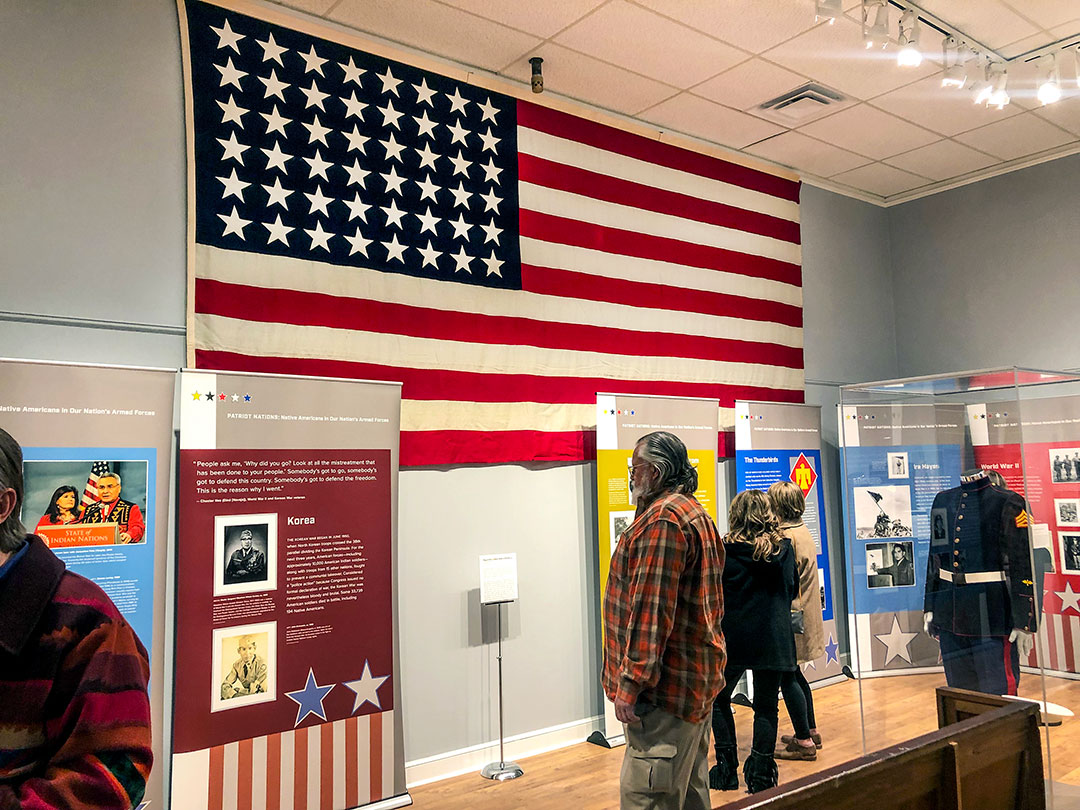 ‘Patriot Nations’ exhibit on display at Osage museum through June 12

Photo caption: A U.S. flag donated by Principal Chief Geoffrey Standing Bear 10 years ago was included in the exhibit. The flag was given to him by his grandmother and was hand sewn, circa pre-1940. SHANNON SHAW DUTY/Osage News

The Osage Nation Museum’s latest exhibit comes from the Smithsonian’s National Museum of the American Indian and focuses on the commitment and valor Native Americans have always shown in serving their country.

Patriot Nations: Native Americans in Our Nation’s Armed Forces, a 16-panel exhibition that documents 250 years of Native veterans, is on loan to the ONM until June 12.

Accompanying the panels are items from the ONM’s permanent collection. Among those items are a U.S. flag donated by Principal Chief Geoffrey Standing Bear about 10 years ago, said acting curator Addie Roanhorse. She said the flag was given to him by his grandmother and was hand sewn, circa pre-1940.

Hanging on the north wall of the exhibit is an ornately beaded broadcloth blanket that was made for Charles Donovan, 115th Infantry, 29th Division, circa 1918. In a glass case are peace medals from the 1800s, given to Osage leaders when they traveled to Washington, D.C. and met with U.S. presidents.

At the opening reception for the exhibit, Osage Code Talker coins were given to the public. August Chouteau, Osage, who was confirmed by the U.S. Department of Defense as a Native American Code Talker in World War I, is featured on the north wall of the exhibit.

Information on every war fought since colonial contact and details about tribal warfare are included in the panel exhibits.

“The enduring sense of community protection can be seen as Osages continue to serve their country through participation in every branch of service, in every major war the US has fought since WWI,” according to a press release.

“Native Americans have served in every major U.S. military encounter from the Revolutionary War to today’s conflicts in the Middle East in higher numbers per capita than any other ethnic group.”