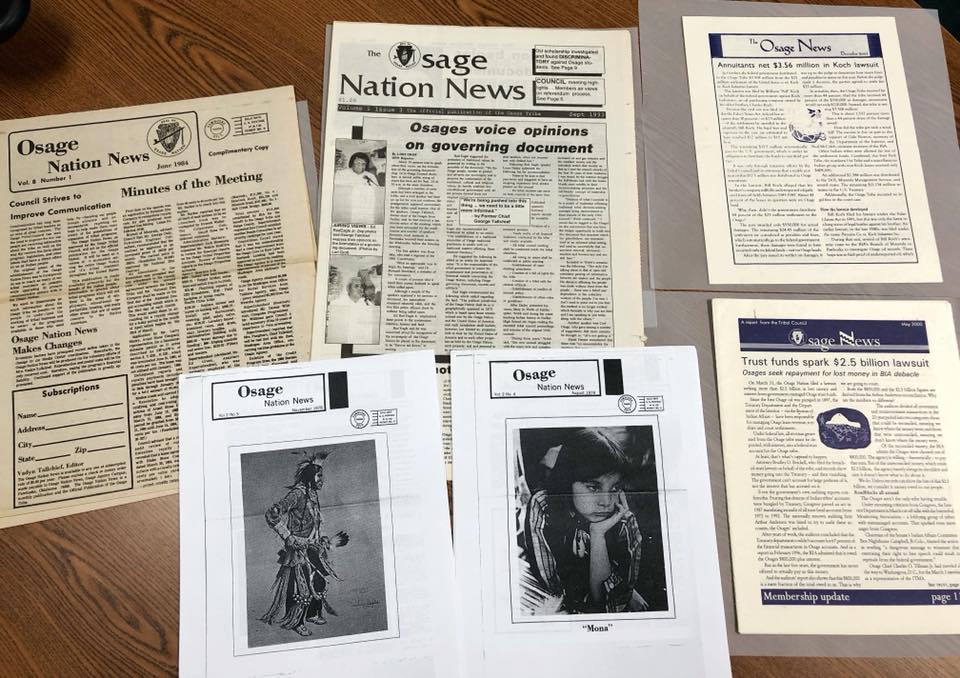 The Osage News, covering the Osage people for 42 years

The Osage News was founded in 1977 as the Osage Nation News by resolution of the 24th Osage Tribal Council.

The first editor of the ONN was Janet Emde of the Grayhorse District. Emde is now an accomplished seamstress and Osage yarn work weaver who works in the Osage Nation Visitor’s Center in Pawhuska. After working at the ONN she worked at the Pawhuska Journal-Capital for a few years. Her staff at the time was Osage writer Louis Gray, who continues to write editorials for the Oklahoma Eagle, as well as a career in counseling.

Emde said the newspaper’s distribution was around 2,800 printed copies. They were labeled by hand and sorted for third class mailing. The newspaper was funded through Self Determination Funds, PL 93-638. She said there was no email or digital photography at the time – the newspaper was produced from paste-up of the actual paper, with photo paper and X-Acto knives.

“The 1970s were a time when we all learned the importance and meaning of the words ‘in Perpetuity,’ and the tribe was a force to be reckoned with on Capitol Hill. The Chief, Assistant Chief, and eight council members would send a delegation to address our issues and ensure that needed legislation was passed,” she said. “Today, a reporter would most likely go. I was too naïve to know this was not the norm to see legislation from council committee to Federal Register in one term.

“Nationally, many changes were coming about. Most memorable to me were the passage of the Indian Child Welfare Act and the American Indian Religious Freedom Act, both in 1978, our first year in business. Louis Gray did a great job covering these,” she said.

Local growth included the construction of what is now the Wah-Zha-Zhi Health Center and the administration building, which housed the Tribal Council on the south end and Osage federal programs to the north, she said.

“I had the pleasure of seeing Robin Polhamus murals come to life while sitting hours each month in council meetings. Initially, the meetings were where the IT department is today,” she said. “Elections were in the museum and ballots were put on strings like beads after counting to ensure they were only counted once. Can you imagine tabulating the fractionalized votes by hand and calculator?”

Emde said the hardest thing she had to cover was the passing of two Council members. Wheeler Brock and Don Big Elk both passed away while in office.

“The loss was palpable and the empty seat at the table was so somber. Both men were soft-spoken and listeners,” she said. “Our tribal leaders often go head to head, but the sudden loss and change were haunting and humbling to those remaining at the table.”

The ONN was in operation from 1977-1990, and then from 1992-1997 and was called the Osage News, dropping “Nation” from the title, according to ON Archive Department records. Following Emde as editor was Louis Gray and following Gray was Vaden Tallchief, the wife of then-Principal Chief George Tallchief.

Gray said during his tenure he hired Sherry Gann and Kathy Wheeler. They produced four newspapers per year but videotaped countless workshops, elder interviews, and events. Their office was where the Information Technology department is now housed.

“We had some challenges with the Tinker administration, and that was really during the rise of people wanting to be active in our tribal government, like non-shareholders. The council had to really ask themselves ‘who are Osages?’ That was the question of the day,” Gray said. “Federal programs were fairly new, but it was growing fairly quickly, and they were growing every year and it spread out to where we had to get new offices.

“It was an exciting time. We had one project I really enjoyed doing and we were going to do a special session of original allottees at the time, about 300 of them. I remember interviewing Silas Russell, him and his brother Otis Russell,” Gray said. “What I didn’t know at the time, they were full brothers, but his father had married sisters. They didn’t think anything of it, that was just the way things were. The history they shared was just really nice. It was a lot of fun getting to do that.”

The newspaper ran on and off from 2000-2001 and then 2004 to present, according to ON Archive Department records. Other editors throughout the years include Teresa Trumbly Lamsam, Julia Lookout and Osage Congresswoman Paula Stabler.

In 2004, the Osage Nation News became the Osage News again and this time the name stuck. In 2008 the Osage News joined the Native American Journalists Association, the Oklahoma Press Association and the Society of Professional Journalists. Since that time the publication and staff have won numerous awards, including NAJA’s prestigious Elias Boudinot Free Press Award.

The Osage Nation Constitution, ratified in 2006, calls for Freedom of the Press. However, the Independent Press Act wasn’t passed until 2008 and was upheld by the Osage Nation Supreme Court.

The Osage News currently mails the newspaper to approximately 7,000 subscribers. It has a website and social media accounts on Facebook, Twitter and Instagram. The newspaper is mailed out monthly and a downloadable PDF copy is available on the website. The News covers the Osage Nation government, its citizens, its communities, culture and business enterprises.

The mission statement of the Osage News is:

For more information on how you can subscribe to the Osage News, send a news tip, or stop in for a visit, call (918) 287-5668, email osagenews@osagenation-nsn.gov or message us on Facebook. The Osage News is located in downtown Pawhuska at 604 Kihekah.