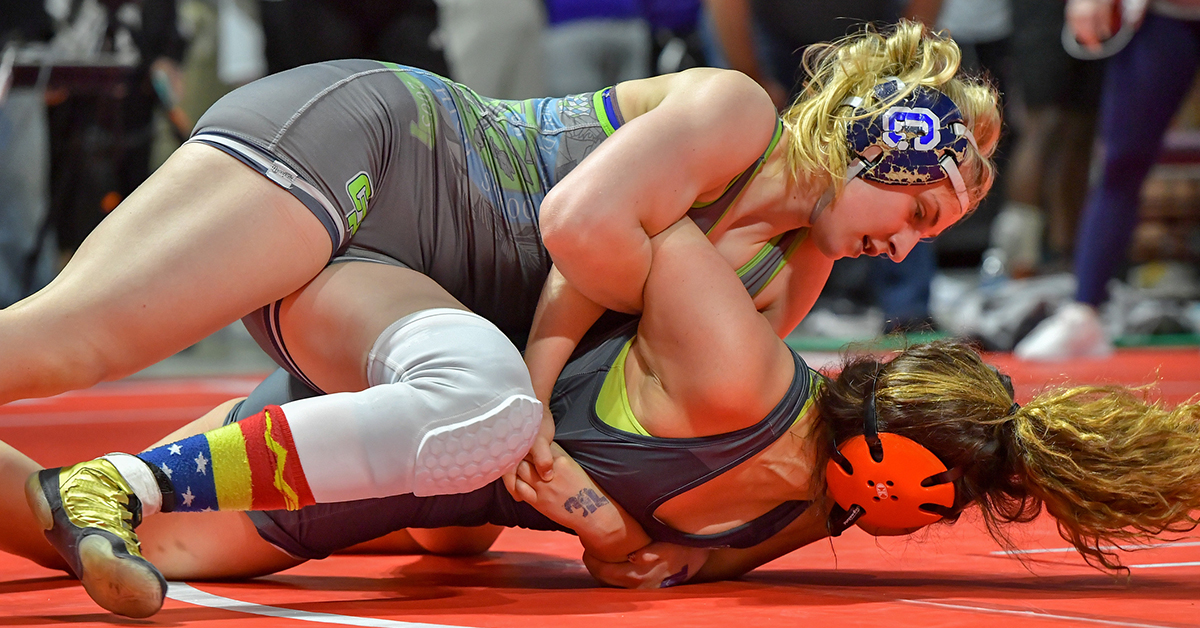 Photo caption: Hunter Robinson, Osage, competes in folkstyle and freestyle wrestling. She is currently narrowing down her choices for which college she will wrestle for. Courtesy Photo/Heather Robinson

The fourth time was the charm for Osage wrestler Hunter Robinson.

Currently ranked 4th in the Nation, the 148 lb. wrestler from Woodlands, Texas, won gold in the Class 6A State Championships for College Park High School and ended her senior year unbeaten, with a perfect 44-0 record. But her career is far from over.

She will next compete at the National Championships in freestyle wrestling in Fargo, North Dakota in July. She also has to select one of 12 colleges who have been courting her for the past few years.

Osage News: How does it feel to end your high school career as the state champion? What all was given to you? Where do you keep your trophy?

Hunter Robinson: “It feels great. My days are the same, but the congratulations I receive from teachers, friends, and family members always brightens my day. I was given a large print out of my bracket, a gold medal, and small interview. I keep all my medals together on a big hanging rack that says, ‘Think Strong, Be Strong, Finish Strong.’ My state medal actually was the last medal I could fit on that rank. I will be putting my future national medal on a different rack that says, ‘Always Earned, Never Given.’”

News: What does your current training consist of since you’re continuing to compete in Nationals?

Robinson: “Training now almost feels like pre-season training. It is a smaller group of kids because it is only a mandatory practice for the guys and girls going to Nationals. Practices are a little shorter but only because we all know the routine. We have about an hour of hard drilling and fine tuning, 30 to 45 minutes of live wrestling, and the conditioning Coach has planned.”

News: Do you aspire to compete in the Olympics? What would that entail?

Robinson: “No, I don’t think I do. My Dad would definitely want that though. It would entail a constant diet, several workouts a day on top of all the practices needed.”

News: What colleges are you considering? What type of degree would you like to pursue?

Robinson: “I had about 12 different colleges contact me to wrestle for them. My Coaches and I have narrowed it down to about four. Wayland Baptist University in Texas, McKendree University in Illinois, Campbellsville University in Kentucky, and Emmanuel University in Georgia. I think I want to study either biology or nursing. I am not totally sure, but I’m giving myself a direction to head toward.”

News: Where would you like to see yourself in five years?

Robinson: “Well I haven’t quite figured that out, but if I continue down the science path, I might want to become a dermatologist. My mom is one of the smartest people I know if not the smartest, and she didn’t become a doctor out of laziness and the dislike of so many years of school. Looking back now she wishes that she’d stayed in school, so I was thinking listen to your mom and just do the schooling even if it sucks. I would be in medical school in five years pushing through for my mama.”