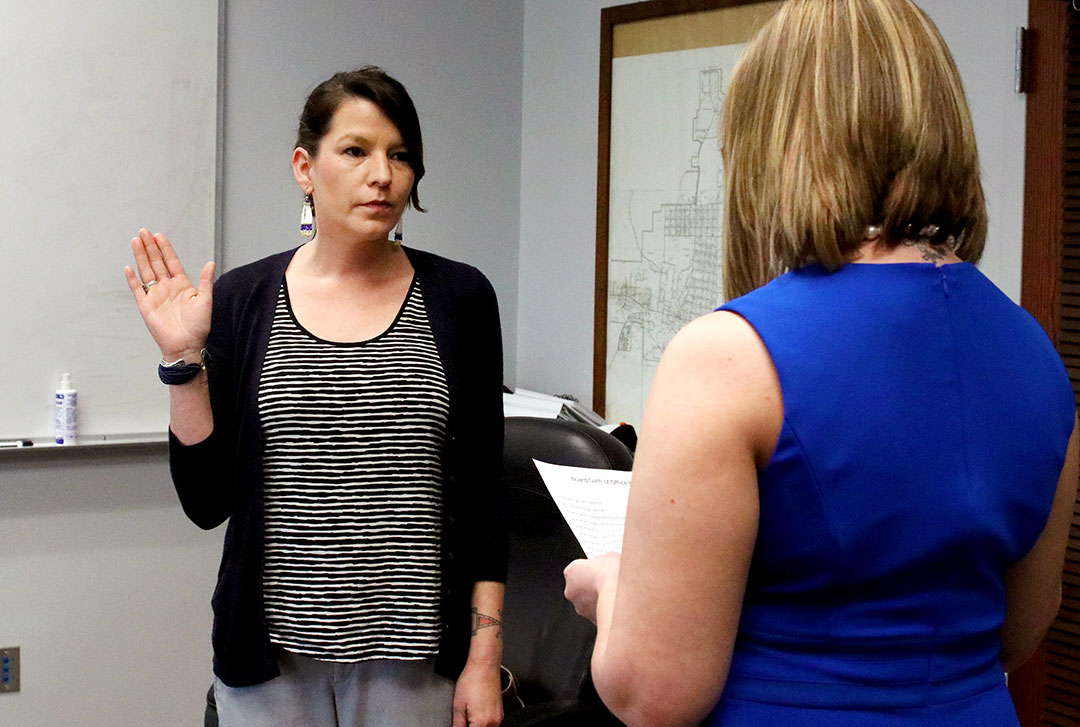 Photo caption: Addie Roanhorse takes her oath of office on April 8 to serve on the Pawhuska Board of Education for the next five years. SHANNON SHAW DUTY/Osage News

Addie Roanhorse, Osage artist and mother, has long taken interest in the Pawhuska Public School system since she moved to Pawhuska five years ago.

A businesswoman and part owner of The Little Rain Song Loft in downtown Pawhuska, she decided it was time for her to try and make a difference for the children of the district – a school district that has struggled for the last few years. She threw her name in for the Board of Education and ran unopposed.

On April 8, Roanhorse was sworn in for a term of five years, with family and friends present. Principal Chief Geoffrey Standing Bear was also in attendance. She fills the seat previously held by another Osage citizen, Justin Sellers, who served for a decade.

“I figure I can’t complain about anything that I’m not willing to step up for, especially when it involves the education of our children. I am going to support efforts to reopen the Jr. High School and utilize the campus to its full extent – that includes the tennis courts,” Roanhorse said. “I will also continue to advocate for Arts in the schools. I am honored to be on the School Board of Education and hope to make a positive impact. I think it’s imperative that there is an Osage presence on every board in Osage County.”

Roanhorse works for the Osage Nation as its main graphic designer and she has her Bachelor of Fine Arts with an emphasis in graphic design from Rogers State University.  She has plans to host a youth art camp at the Pawhuska Elementary school over the summer and she looks forward to working with the students.

In addition to serving on the school board, she has been commissioned to design for The Momentary, a satellite of Crystal Bridges Museum of American Art in Bentonville, Arkansas. Her modern take on designs of Osage finger weaving patterns will be etched into the glass of The Momentary’s entryway, loading dock and elevator tower. Her work will be the first thing visitors see when they enter The Momentary.