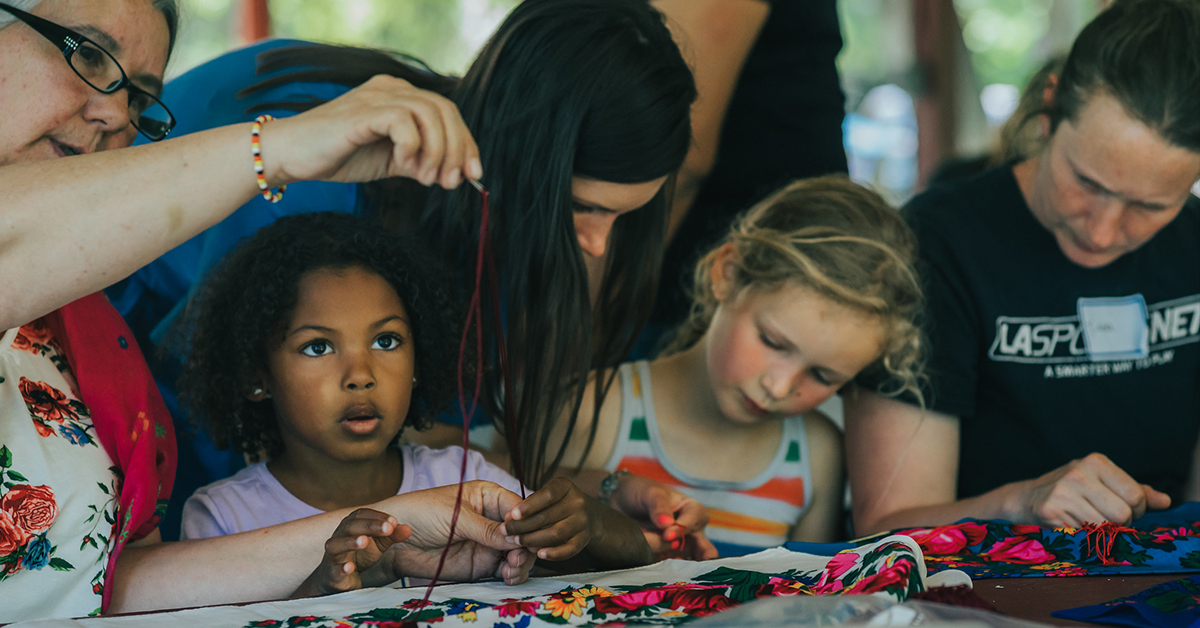 Photo caption: Attendees of all ages got to participate in making a little girl shawl in Woodland, California on April 27. CODY HAMMER/Osage News

The NCO hosted the outdoor gathering at Nelson’s Grove where it hosted its fall 2018 gathering in November. Attendees came from various parts of the region including the San Francisco Bay Area, Sonoma County and the nearby Sacramento metropolitan area.

Keir Johnson-Reyes, who sits on the NCO steering committee, welcomed attendees and said the event is held for “celebrating who we are, our connection to our Osage people … we’re a bit disconnected physically, but we do these types of gatherings to ensure that we can come together and feel that connection and feel encouraged to go home.”

At the invitation of the NCO planning committee, ON language and culture department employees traveled from Oklahoma to deliver presentations and a workshop to the attendees that day.

Osage Nation cultural department officials including Language Department Director Vann Bighorse attended and delivered an overview of the department he oversees. Bighorse, a former Bureau of Indian Affairs employee, also worked as the Wah-Zha-Zhe Cultural Center director in earlier years and said his interest in the Osage language started in childhood. Bighorse started by sharing a recollection that prompted his interest in the Osage language when he was younger.

“I was at a place helping out and this old man said ‘Ni-Ko^bra’ and he expected me to know that, I didn’t know it,” said Bighorse who remembered growing up with elders who spoke the Osage language with each other, but not with him at the time. The man then translated what he was saying to Bighorse – “’I want some water,’ so I had to get him some water and so from that day, I always remembered what that meant and so from then on, I always wanted to learn my language,” Bighorse said.

In the early 2000s, Bighorse started attending language classes taught by Herman “Mogri” Lookout, who is now the master teacher for the Language Department. “I was very excited, I was on fire to learn the Osage language … it’s really a beautiful language.”

“Our mission is to revitalize the Osage language to its purest form and to teach our people to speak Osage within the realm of our unique ways and daily conversation, our endeavors will be unwavering, our future depends on it,” Bighorse said. He added that efforts to carry on the language are important to maintain Osage cultural identity.

Bighorse led the attendees through pronunciation exercises with the Osage language orthography and also applauded the efforts of other California Osages including Johnson-Reyes who visits Oklahoma on occasion, including during the June Inlonshka dances when Osages (near and far) return to participate in the three village ceremonial dances.

Bighorse also encouraged attendees to download the two available language apps to practice using the Osage language which are “Wahzhazhe” and “Sonny Goes to School.”

Johnson-Reyes, who has learned more about the culture and language from Osages including Bighorse during his visits, honored Bighorse after his presentation with a Pendleton blanket featuring the custom design sold through the ON Foundation. “I took the opportunity in front of the participants of our gathering to honor a good man, Mr. Vann Bighorse, who has contributed so much to the perpetuation of our culture; he's been an invaluable mentor to me and many, many other Osages,” Johnson-Reyes said.

“I feel that our gatherings are hitting a new stride,” Johnson-Reyes said. “We've contended with our fair share of transitions over the last few years, but our coordinating committee is continually impressed to see familiar faces returning each time we gather.

“We are so appreciative of the contributions from the Cultural Center, Language Department, and our Nation. Their guidance and generosity of time, materials, resources, and efforts enhance what we do in so many ways. The presentations and activities from both the Cultural Center and Language Department were very well received and people left satisfied that they learned about ways to get involved in our language program, make chokers, and fringe shawls.

“There is such a wealth of knowledge and heart for our people in these two departments, we could not be happier to work with them. What stands out most are the relationships we're forging together,” he said.

Attendees Carol Arata and Jeffrey Escallier both sent thanks to the NCO after the gathering for “a great meeting.”

Attendee Paula Surber Lockwood also expressed thanks for the presentations too and said she took the men’s choker home that she worked on to finish later and shared a photo of it completed on the NCO Facebook page.

In addition to the April 27 gathering, the NCO steering committee also invited WCC Director Addie Hudgins to visit the region to also deliver workshop classes in-person that were also featured live on Facebook. NCO steering committee member Chelsea Bryan invited NCO page followers to attend the workshops in-person at the Native American Health Center in Richmond, Calif., or to follow online to make shawls on four separate dates in April and May.

For more information on services and culture classes offered by the WCC, the Pawhuska office can be reached at (918) 287-5632 or online at https://www.osagenation-nsn.gov/who-we-are/cultural-center

For more information on Osage language resources and classes, call (918) 287-5505 or visit the ON Language Department website at: https://www.osagenation-nsn.gov/who-we-are/language-department