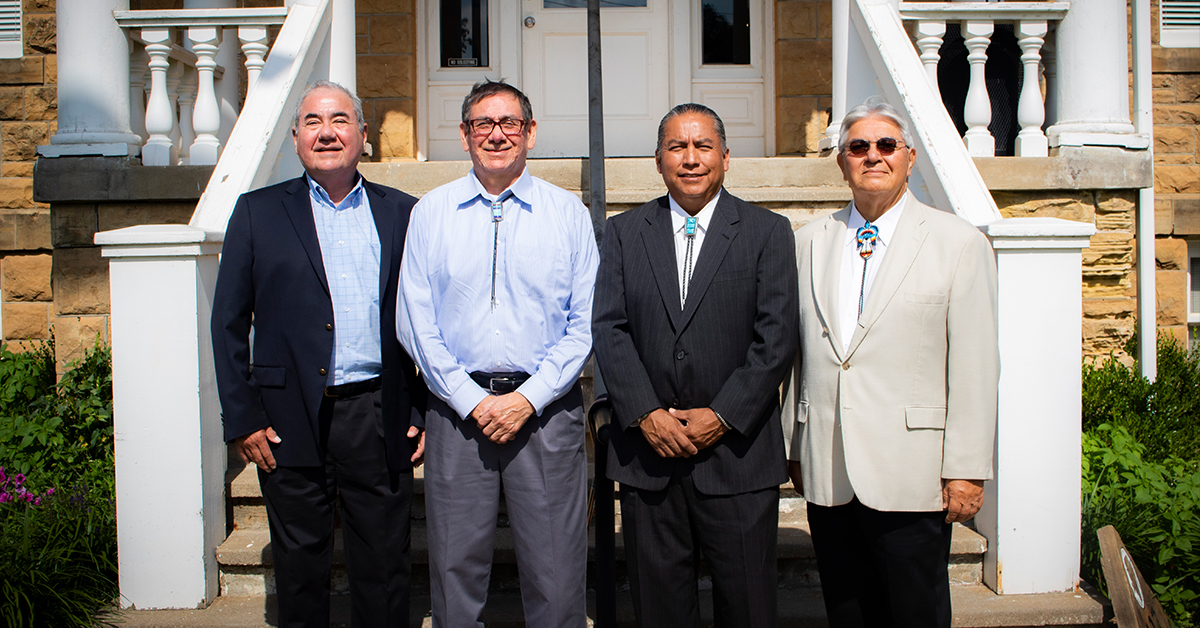 With an assist from the Osage Nation, a long-standing Oklahoma institution is now one step closer to being chartered as a tribal college.

By a 10-0-1 count, the Osage Nation Congress adopted a resolution on June 24 to charter Muskogee-based Bacone College as a tribal college and encourage the American Indian Higher Education Consortium to recognize the charter.

Congresswoman Shannon Edwards was absent. Congressman Archie Mason, who is a member of Bacone’s board of trustees, abstained. Joined by representatives of Bacone College at the executive branch offices, Principal Chief Geoffrey Standing Bear signed the resolution on July 2.

“Whenever you can do something that will make all Indian people proud and have a place to come and get educated, you’re doing a great thing,” Congressman John Maker said. “That’s what we have before us today. We’re not just helping our Osage people, we’re helping all Indian people. Let’s do something for all Indian nations.”

By chartering with a tribe, Bacone College would be able to apply for approval as a Title I tribal college through AIHEC. It would also change the school’s accreditation status from a private school to a public one, thus allowing it to lower its tuition rates in the future.

According to the school’s website, 2019-2020 tuition at Bacone College is $400 per credit hour for part-time students or a flat $6,000 per semester for full-time students. Those figures do not include housing, meal plans, textbooks, fees or, in the case of international students, an annual $12,575 enrollment deposit.

Almost three-fourths of its full-time students are Pell Grant recipients.

In recent years, the school has relied primarily on tuition and private donations to stay afloat, thus forcing the Higher Learning Commission to place its accreditation on probation due to its financial instability.

Speaking before the Education Committee on June 17, Bacone College’s attorney, Wilson Pipestem, assured Congress that the financial upheaval would not automatically bar the institution from being chartered as a tribal school.

Additionally, Congress’ resolution, as written, does not obligate any tribal dollars, but simply encourages donations to the cash-strapped school.

“The wording just says encourage,” Maker said. “That’s not a directive that the nation has to donate any money whatsoever, even if it’s from meat pie sales or Indian taco sales. If our Indian people need help, then we should help them.”

Founded in 1880 as Indian University, Bacone College is currently affiliated with the American Baptist Church of the United States. Since 2010, it has been the accreditation partner for Pawnee Nation College, one of Oklahoma’s two remaining tribal colleges. More than half of its student body self-identifies as Indigenous.

Facing a debt of more than $2 million, the school temporarily suspended operations in May 2018. In order to resume operations in time for the fall 2018 semester, the college’s leadership approved the sale of more than $3.5 million in property adjacent to the campus, as well as the elimination of several inter-collegiate athletics teams, including football, lacrosse, wrestling and rodeo. Its average annual operating budget is now $13 million.

In April, the Tahlequah-based United Keetoowah Band of Cherokee Indians unanimously approved a resolution to charter Bacone College as well. The adoption of the resolution opens the door for the formation of a chartering consortium. Clark mentioned that they have met with leadership from other Oklahoma tribes as well, including the Otoe-Missouria Tribe and the Cheyenne and Arapaho Tribes, with future meetings on tap with the Kiowa and Shawnee tribes.

“We are excited that the Osage Nation has joined us in chartering Bacone College as it moves towards tribal college status,” UKB spokeswoman Brittney Bennett said. “With all its history, Bacone has always been an important educational institution for the American Indian community. We are grateful to have the opportunity to work with another tribal nation to help move it forward into the next chapter and see it come together once more as a premier institution for our tribal communities.”