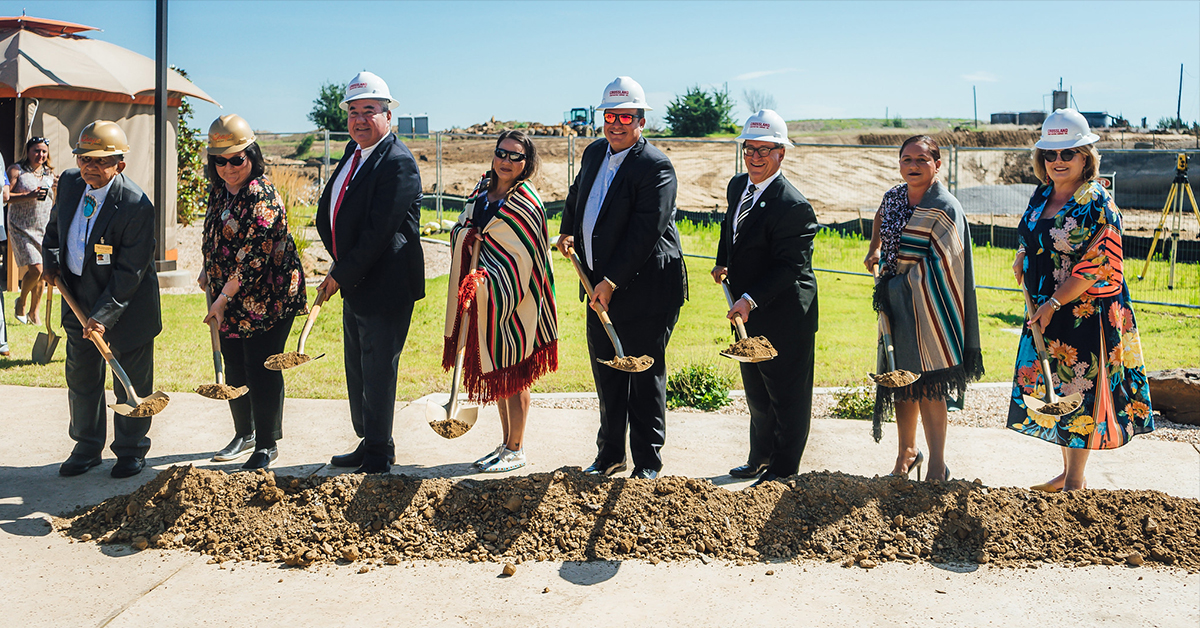 Citing increased business at the Nation’s flagship hotel and casino property – as well as its restaurants, concerts and special events hosted in the Skyline Event Center and banquet facilities – Osage Casino officials feted the 145-room hotel tower construction project at the outdoor hotel poolside on July 9 amid the summer Oklahoma humidity and bright sunlight.

Osage Casino CEO Byron Bighorse said construction on the $28 million second hotel tower project will take about a year and will mirror the first tower, which has 141 rooms. Selected contractor Crossland Construction Company has started dirt work at the site, which is adjacent to the first hotel tower and pool.

“We saw an increase in restaurant and bar sales on concert nights and more hotel rooms being booked by patrons,” Bighorse said. “The success from the Tulsa casino has also allowed us to give back to the tribe helping fund programs that assist tribal members and preserve our culture. With all of this success comes challenges – one of those challenges has been the lack of hotel rooms for the demand of our patrons and that’s why we’ve come together today.”

The new $160 million hotel and casino opened in late August 2018 and the 2,000-seat Skyline opened earlier this year and has hosted several concert acts including Goo Goo Dolls, Kenny Loggins, Bell Biv DeVoe, and The Fray, as well as the Nation’s 2019 Sovereignty Day Powwow. The casino now holds more than 1,500 electronic games, 16 table games, a full-service microbrewery, a sports bar and three restaurants.

Bighorse said the second hotel tower project should be completed in August 2020.

Mark Simms, chairman for the ON Gaming Enterprise Board, said “it’s a great day” and the project is the result of work involving the board, casino management and the ON Congress, which approves the gaming enterprise’s annual plan of operations that includes improvement and expansion projects.

“Through our annual plan, we have planned for this and come under budget and have done it very quickly. This is great because we haven’t had any hold-ups … We’re coming a long way and in my opinion, our casino is on the outside as beautiful as it on the inside and there’s a lot to do,” Simms said, adding he expects next year’s annual distribution of gaming revenue to ON government operations to be larger than in recent years.

Principal Chief Geoffrey Standing Bear also acknowledged Simms’ comments adding the success is based on certain assumptions of good management, marketing, customer service to have a competitive casino in the Tulsa region. “Today we fund our programs as we always have from the (gaming) profits. The profits of this casino go to our education, higher education scholarship programs, to our health program, to our cultural programs, to our pre-schools, to every non-federal funding activity that you see … We’ve made a lot of progress and let’s keep on this road for the future of this Nation.”

Also joining Osage officials in celebrating the second hotel tower project was Mike Neal, president and CEO of the Tulsa Regional Chamber, who acknowledged the area casinos’ contributions to the economy.

“Tourism is a major driver of northeast Oklahoma’s economy, as well as our state’s economy,” Neal said, noting more than 21 million people visited Oklahoma in 2017, per recent figures from the state’s Tourism & Recreation Department. “Those 21 million people spent a record $8.9 billion in our local communities … Closer to home, if we just go to Osage County alone, visitor spending was up 11 percent higher in 2017 to 2016, which really translated to 11.7 percent increase in state, county and municipal taxes derived as a result of visitors’ spending.”

Neal added “investing in tourism infrastructure is a benefit to us all … Gaming, to The Gathering Place, to the Gilcrease Museum … Tulsa’s no longer a secret, tribal nations have really been at the forefront of attracting new visitors to Tulsa and new visitors to the Osage Nation. I think the Osage Nation has certainly done its share in making investments in this critical infrastructure in supporting our economy, we thank you for your partnership.”