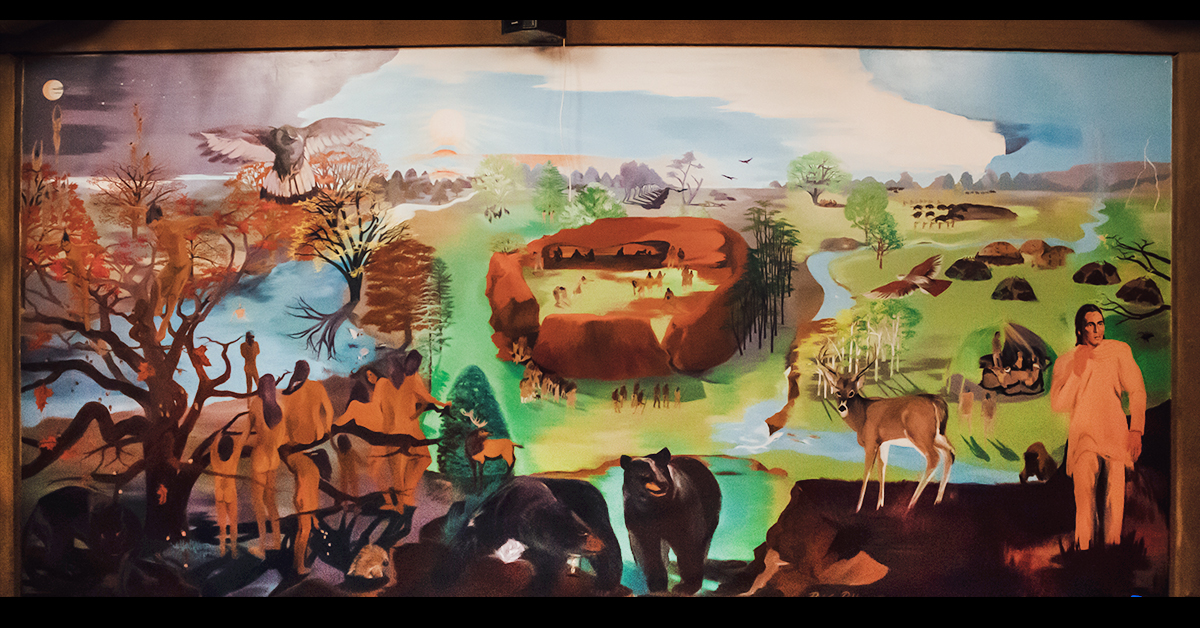 Osage cultural stories to be incorporated into Daposka Ahnkodapi curriculum

In an age where Native American communities across Oklahoma are making efforts to incorporate accurate tribal history into state curriculum, the Osage Nation’s Daposka Ahnkodapi is integrating Osage history and cultural stories.

Dana Daylight, the Language Curriculum Specialist for Daposka Ahnkodapi “Our School,” met with the Traditional Cultural Advisors committee on July 12 to discuss teaching the Osage Creation Story at the school.

“I have been looking for creation stories to incorporate and I found some in John Joseph Mathews (books), but not really anywhere else,” she said. “I love the mural in the council chambers, and I would like to teach that creation story in the school.”

The mural of the creation story in the council chambers, painted by Robin Polhamus in 1981, tells one version of the story that was researched by Polhamus, according to an Osage Nation News article from that time. Polhamus tells the story of the Osage coming down from the stars at the request of Wah-Kon-Tah. The Osage float down and land in red oak trees to form three of four divisions of the Osage people, the water, land and sky. The three divisions of Osage wander the earth in search of the fourth division, called the Isolated Earth People. Once they find the fourth division, they become complete.

ON Historic Preservation Officer Dr. Andrea Hunter said there are different creation stories that relate to different clans as well.

“The foundation is the same for the story, but the certain aspects of it are different with each clan and La Flesche writes about this,” she said.

Daylight said she has spoken with Osage elders Eddy Red Eagle Jr. and Archie Mason and she is currently mapping out the curriculum.

She said she would bring the lesson plans back to the TCA committee for approval before teaching the creation story at the school. She said it would take many lessons to teach the different aspects of the story, the roles the clans performed and the story’s relation to Osage life today.

Historically, the Osage had over 20 clans and sub-clans. It is not currently known how many clans are left and active today, but the Historic Preservation Office has conducted an Osage clans project in the past.

Hunter said she also has old text of Osage children’s stories she can share with Daylight to be used in the school. Osage Nation Museum director Marla RedCorn-Miller was also present at the meeting and asked Daylight to think of the museum as a communal base, a venue to share what they are teaching in exhibits at the museum, “To share the beauty of what is happening here.”

Akers said he didn’t discover the Osage creation story until he was a young man in college.

“This creation story is something that stays with them throughout their lives and I think it’s a really good thing,” he said. “This is not something they’re discovering, or how they’re reconnecting, or feeling lost and coming back, they will grow up with it. It will become a part of them, a part of their life.”